President-elect Donald Trump said Wednesday that he’s leaving his business empire to focus on being the nation’s 45th president, bowing to pressure to avoid potential conflicts of interest between governing and profiting in the private sector.

“I will be leaving my great business in total in order to fully focus on running the country in order to make America great again,” he tweeted in a series of missives sent before dawn. “While I am not mandated to do this under the law, I feel it is visually important, as president, to in no way have a conflict of interest with my various businesses.”

He said legal documents are “being crafted which take me completely out of business operations,” adding that the presidency is “a far more important task!”

great business in total in order to fully focus on running the country in order to MAKE AMERICA GREAT AGAIN! While I am not mandated to ….

great business in total in order to fully focus on running the country in order to MAKE AMERICA GREAT AGAIN! While I am not mandated to ….

do this under the law, I feel it is visually important, as President, to in no way have a conflict of interest with my various businesses..

Hence, legal documents are being crafted which take me completely out of business operations. The Presidency is a far more important task!

Mnuchin, 53, led Trump’s finance operations during the presidential campaign. But he has no government experience, which could prove a political hurdle. If confirmed by the Senate, Mnuchin would play a central role in shaping Trump’s tax policies and infrastructure plans. He would also lead an agency tasked with implementing international economic sanctions.

Speaking on CNBC’s Squawk Box on Wednesday, Mnuchin said he and Ross are “thrilled to work for the president-elect and honored to have these positions.” He said “sustained economic growth” is the chief priority of the incoming administration.

He also outlined what he called “the largest tax change” since President Ronald Reagan — cutting the corporate tax rate to 15 percent, a “big” middle-class income tax cut and simplifying taxes.

“By cutting corporate taxes, we’re going to create huge economic growth and we’ll have huge personal income,” said Mnuchin, whose credits as an executive producer include the Tom Hanks film Sully and the Ben Affleck movie The Accountant.

Trump has previously said that he’d leave his business operations to his three eldest children — Donald Jr., Eric and Ivanka, though that wasn’t clear from his tweets Wednesday.

Priebus told MSNBC’s Morning Joe that Trump has “got the best people in America working on it.” Priebus demurred when asked if Trump planned to put his businesses in a blind trust — as presidents have traditionally done — or leave them in his children’s hands.

“I’m not ready to reveal that really,” he said.

Priebus added that Trump’s business acumen and the many business interests he has as a result of it is “nothing to be ashamed about.” He said Trump is “taking seriously” the issue of possible conflicts of interest.

“We’re making sure that all those conflicts are taken care of,” Priebus said. He said the applicable rules and regulations “are very vague” and that Trump’s people are “doing the best job we can.”

Priebus said the country hasn’t seen a president of such business acumen before and that the rules and regulations “don’t contemplate this scenario.”

.@Reince: Mnuchin will be in lockstep with Trump https://t.co/fVWrF9e7QR

No previous commander in chief has brought with him such a sprawling business empire with so much complexity, opaqueness and opportunity for self-dealing as Trump.

Trump owns golf clubs, office towers and other properties in several countries. He holds ownership stakes in more than 500 companies. He has struck licensing deals for use of his name on hotels and other buildings around the world and has been landing new business in the Middle East, India and South America.

On Tuesday night, the president-elect also met with his potential pick for secretary of state, Mitt Romney. The pair, who are known for their contentious past, were photographed together inside New York City’s Jean Georges, the three-Michelin-star restaurant in Trump International Hotel and Tower.

Priebus also attended the dinner, which was captured by photographers.

According to CNN, the three ordered a young garlic soup with thyme and sauteed frog legs, and diver scallops with caramelized cauliflower and caper-raisin emulsion as appetizers. Priebus and Trump ordered a prime sirloin with citrus glazed carrots for their main course and Romney ordered lamb chops with a mushroom bolognese sauce. Dessert was chocolate cake.

After the dinner, when asked if Romney would be the next secretary of state, he told CNN, “Well, we’re going to see what happens.”

Romney added he had a “wonderful evening.”

“By the way, it’s not easy winning,” he said. “I know that myself. He did something I tried to do and was unsuccessful in accomplishing. He won the general election. And he continues with a message of inclusion and bringing people together and his vision is something which obviously connected with the American people in a very powerful way.” 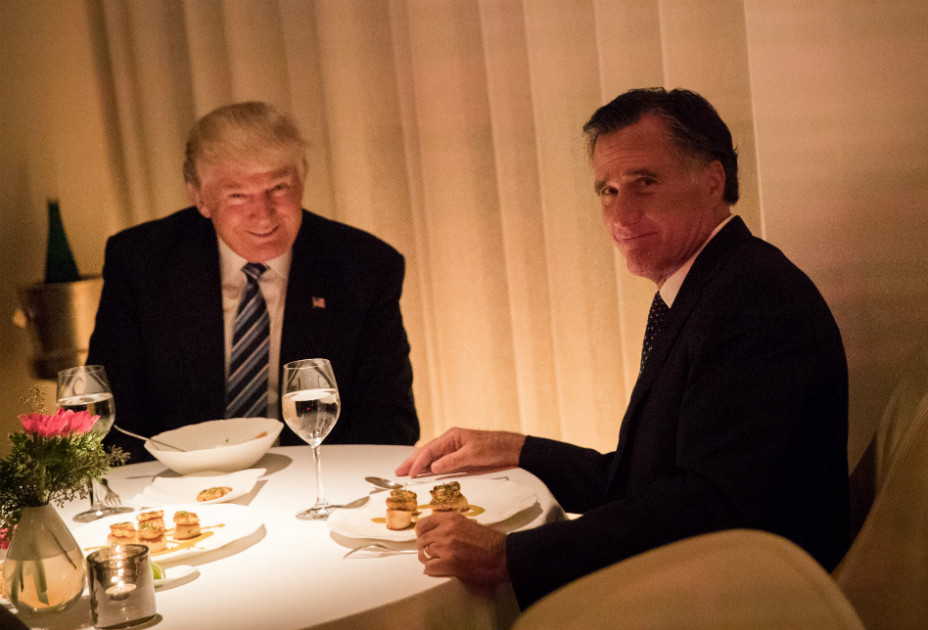