As Bernie Sanders gears up for rallies in California ahead of Super Tuesday voting, the Vermont senator’s campaign has touted a downtown Los Angeles event on Sunday headlined by the hip-hop group Public Enemy. But the group’s co-creator, Flavor Flav, isn’t pleased.

The artist, whose real name is William Drayton, has enlisted a law firm to try and get the presidential campaign to drop its use of the name Public Enemy in association with the rally because it promotes a “false narrative to the American people” that the group has endorsed Sanders.

“To be clear Flav and, by extension, the Hall of Fame hip-hop act Public Enemy with which his likeness and name have become synonymous, has not endorsed any political candidate in this election cycle and any suggestion to the contrary is plainly untrue,” reads a letter dated Feb. 28 from Matthew H. Friedman of Nevada-based law firm Ford & Friedman. The Sanders campaign did not immediately respond for comment.

Salman Rushdie Off Ventilator and "on the Road to Recovery" After Attack, Agent Says

The letter, obtained by The Hollywood Reporter, says that while the group’s other founder, Chuck D, will be performing at the Sanders event, that doesn’t constitute an endorsement of the band for the Democratic presidential hopeful.

The letter adds, “The continued publicizing of this grossly misleading narrative is, at a minimum, careless and irresponsible if not intentionally misleading. Flav is reaching out, not in the spirit of division, but for the sake of unity in the hope of preserving the integrity of the Public Enemy Movement and the faith and trust his millions of fans around the world have placed in him.”

The Sanders campaign has been promoting Sunday’s event at the L.A. Convention Center on social media and in text messages since Wednesday. Its event page entreats, “Join Bernie Sanders, Sarah Silverman, and Dick Van Dyke, with a special performance by Public Enemy Radio.”

The California rally, days before Tuesday’s primary in a state where 416 delegates are at stake, is the latest star-studded event for Sanders. In January, Vampire Weekend and Bon Iver played at Sanders events in Iowa, while in New Hampshire, The Strokes trotted out new material to support Sanders ahead of voting. Bela Fleck is also set to play rallies in Massachusetts, and Nathaniel Rateliff & The Nightsweats will play an event in Minnesota.

Flavor Flav has had a long legal history with Chuck D, suing his bandmate and the group over unpaid legal royalties in 2017. The Feb. 28 letter from Flavor Flav’s legal representation concludes, “If Bernie allows this deceptive marketing to continue without clearly correcting the messaging to reflect the true nature of this endorsement which should accurately read: ‘Chuck D of Public Enemy‘ — Senator Sanders will himself have played a part in whitewashing a key chapter in American History. Bernie, his name is Flavor Flav and he does NOT approve your message!“ 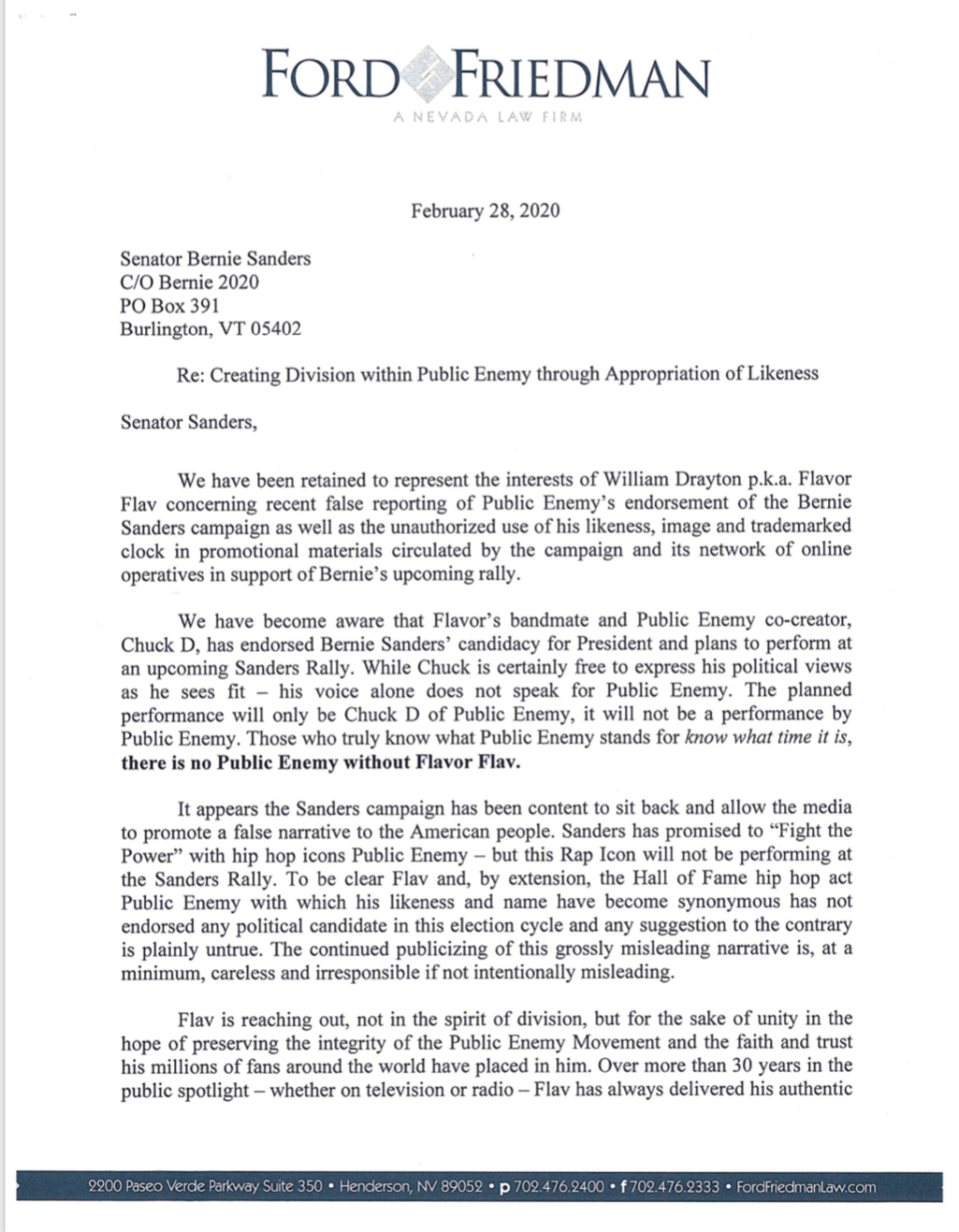 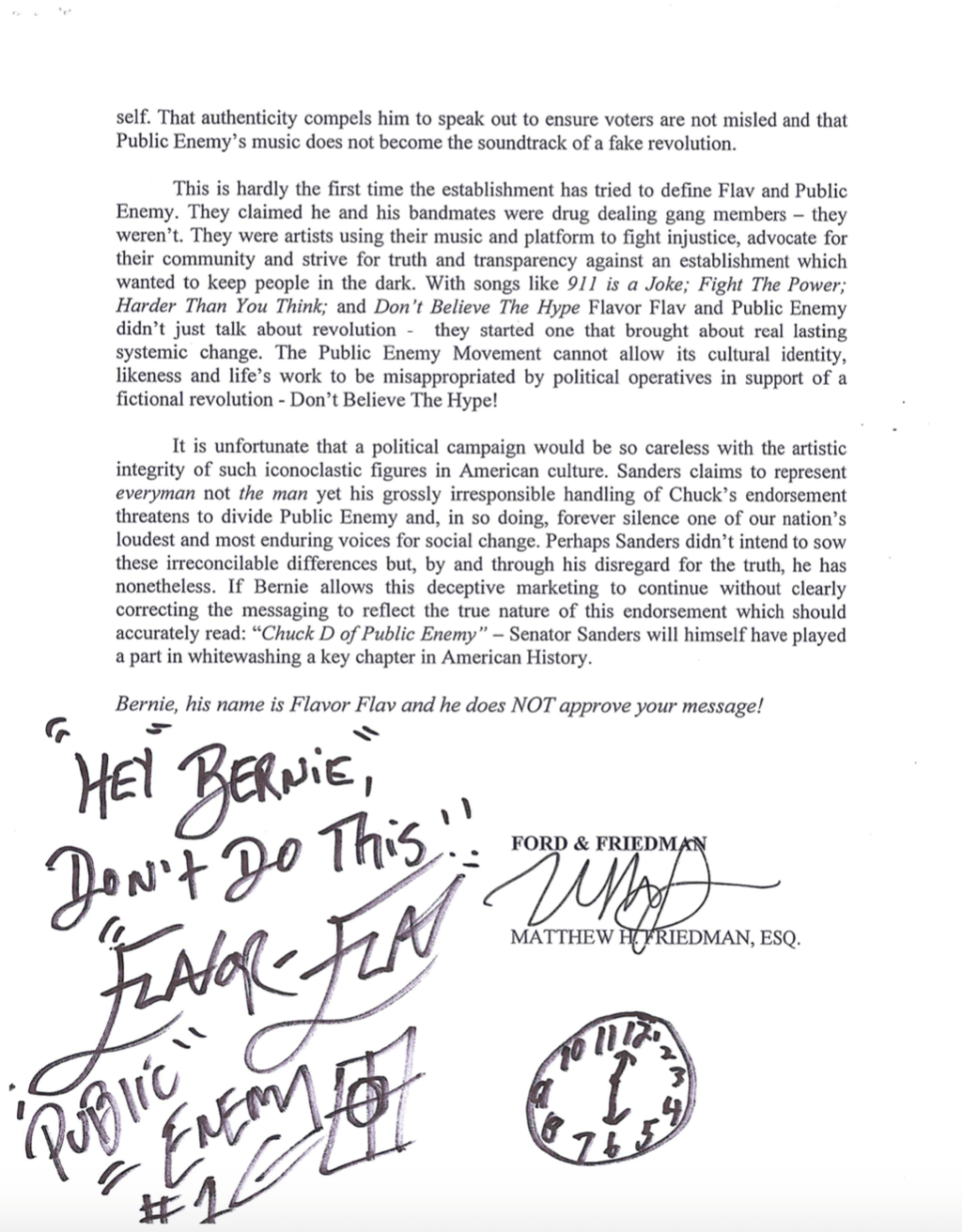