This was not the speech Hillary Clinton had expected to deliver after the 2016 election.

After privately conceding the presidency to president-elect Donald Trump late Tuesday night, the Democratic nominee delivered her emotional public concession speech Wednesday morning to a tearful room, rapt audience and a divided nation, saying she was “sorry we did not win this election.”

“I know how disappointed you feel, because I feel it too,” she said to her room of supporters at Manhattan’s New Yorker Hotel while choking back tears, but never shedding one. To everyone she said: “This is painful and it will be for a long time.”

She then, however, pressed the need for a peaceful transition: “We have seen that our nation is more deeply divided than we thought, but I still believe in America and I always will…. We must accept this result and then look to the future. We owe [Donald Trump] an open mind and a chance to lead.”

After being introduced to the stage by running mate Tim Kaine, Clinton entered the room with a big smile and a wave. She and husband Bill Clinton were both accented with a symbolic pop of the color purple.

“Last night, I congratulated Donald Trump and offered to work with him on behalf of our country,” she said, after the cheers from her rowdy group quieted down. “I hope that he will be a successful president for all Americans.

“This was not the outcome we wanted or that we worked so hard for, and I’m sorry we did not win this election for the values we share and the vision we hold for this country. But I feel pride and gratitude for the wonderful campaign we built together. Being your candidate has been one of the great honors of my life.”

Clinton praised her inclusive, diverse, energized and unruly supporters, stressing how the American dream is for everyone, including immigrants, LGBT people and anyone with disabilities.

“Let’s do all we can to keep advancing the causes and values we hold dear,” she encouraged, listing the economy, protecting our country and planet and breaking down barriers from holding Americans back from achieving their dreams as top priorities.

She then addressed her biggest disappointment.

“I know we have not shattered that highest and hardest glass ceiling, but I know that someday, somehow someone will,” she said in an empowering moment. “And hopefully sooner than we might think right now.” 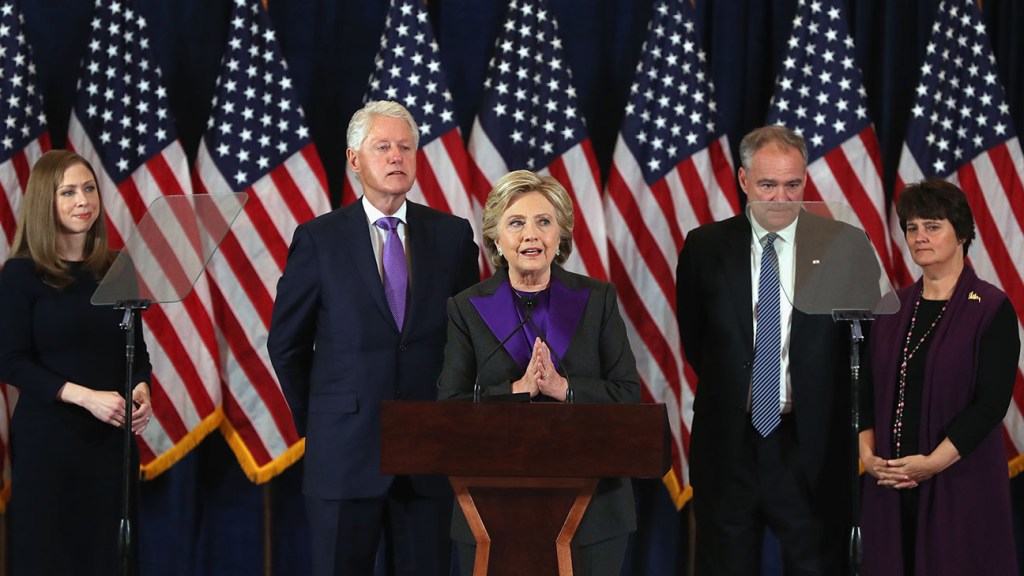 She then delivered messages to young voters and to all of the little girls watching at home.

“I’ve had successes and I’ve had setbacks, sometimes many painful ones,” she said, addressing the youth of the nation. “Many of you are at the beginning of your careers, you will have successes and setbacks too. This loss hurts. But please never stop believing that fighting for what’s right is worth it.”

The crowd erupted in cheers.

“To all the little girls who are watching this: Never doubt you are valuable and powerful and deserving of every chance and opportunity in the world to pursue and achieve your own dreams.”

Despite the loss, Clinton stressed her patriotism and hoped to spread it with her message: “I still believe as deeply as I ever have that if we stand together and work together with respect in our differences, strength in our convictions and love for this nation, our best days are still ahead of us.”

She thanked Kaine and his wife, Anne Holton, President Barack Obama and first lady Michelle Obama (“Our country owes you an enormous debt of gratitude”), and her family, while her husband stood proudly clapping behind her.

“My love for you means more than I can ever express,” she said of her loved ones, including grandkids Charlotte and Aidan, husband Bill and daughter Chelsea Clinton. “You crisscrossed this country on our behalf and lifted me up when I needed it the most.”

She even thanked her secret Facebook group, Pantsuit Nation, encouraging them to make sure their voices are heard going forward.

“This was the best campaign anybody could have ever expected or wanted,” she said to all of her supporters, staff and volunteers.

She stuck around long after the speech concluded to walk around the room and personally address those in attendance. Before her arrival, many of them were shown with tears streaming down their faces.

When an emotional Kaine first took the stage, Clinton’s running mate stressed, “I am so proud of Hillary Clinton.” When he touted her “amazing accomplishment” of leading in the popular vote, the room erupted in cheers.

He then offered a comparison to the president-elect, who up until election night had remained publicly vague on whether he would accept the results. “Nobody had to wonder about Hillary Clinton if she would accept the outcome in our beautiful democracy.”

He ended on a rousing note by quoting William Faulkner: “They kilt us, but they ain’t whupped us yit!”

The setting of Wednesday’s speech was a far cry from what Clinton had planned. Her official election night party had been set at the Jacob K. Javits Convention Center in New York’s Midtown. She had constructed a stage shaped as the United States beneath the venue’s symbolic glass ceiling, as all polls ahead of Election Day indicated that she would, indeed, be celebrating a historic moment as the first female president of the United States.

Instead, Trump, an outsider with zero political or military experience, stunned Clinton and the nation by winning the electoral votes needed to become the 45th president.

Clinton never ended up attending the Javits Center event, where many of her supporters were seen crying by the end of the night. Instead, her campaign manager John Podesta addressed the audience with brief remarks at 2 a.m., instructing them to go home. “We’re still counting votes and every vote should count,” he said. “Several states are still close to call and we’re not going to have anything more to say tonight.”

In Trump’s acceptance speech, which he delivered late Tuesday night at the site of his victory party at the New York Hilton Midtown, the president-elect vowed to unify the deeply divided nation.

“I say it is time for us to come together as one united people,” Trump told supporters gathered in a Manhattan hotel near his Trump Tower campaign headquarters.

“For those who have chosen not to support me in the past, of which there were a few people, I’m reaching out to you for your guidance and your help so we can work together and unify our great country,” he said, the stage crowded with family and his most loyal allies.

President Barack Obama then addressed the nation at 12:15 p.m., where he and Vice President Joe Biden stressed unity and a peaceful transition.