There’s no shortage of scintillating elements in Hillary and Clinton. First and foremost are two giants of the American stage, Laurie Metcalf and John Lithgow, giving wryly amusing — and occasionally poignant — performances that tantalize with private glimpses into very public figures. Then there’s playwright Lucas Hnath, who seems ideally equipped to explore a modern political power union, having mined subversive humor and stimulating insights on marriage and gender dynamics in A Doll’s House, Part 2, which won Metcalf her first Tony Award. And not to forget Joe Mantello, one of the most reliably incisive directors working on Broadway.

Despite all those considerable pluses, however, Hnath’s play, which reportedly has undergone rewrites since its 2016 Chicago premiere, is so slight that once its densely packed, yet nonetheless skeletal, 80 minutes are over you barely give it another thought. Except to wonder what the playwright’s cryptic feelings about Hillary Rodham Clinton might be, and why we just relived her painful defeat in the 2008 Democratic primaries, especially knowing the even more humiliating clobbering that was to come eight years down the track.

Sure, it’s entertaining; Hnath is too smart a writer, and Metcalf and Lithgow too gifted as actors, not to keep us engaged. But not only does Hillary and Clinton lack illuminating fresh perspective, it lacks drama.

It seems positively ungenerous at this point to have Bill Clinton regurgitate the standard criticisms tossed at his wife during both of her ill-fated campaigns for the presidency — that she’s cold, unemotional, wooden, boring, lacking humanity. Unless, of course, the playwright were going to temper that view by exposing a different side to counter those tired dismissals. Alas, that’s not the case, Metcalf’s mercurial performance aside. The glimmers of compassion in the writing are seldom more than that, to the point where I found a sourness creeping into my response to the play, even as I was laughing at some of its pungent comedy. 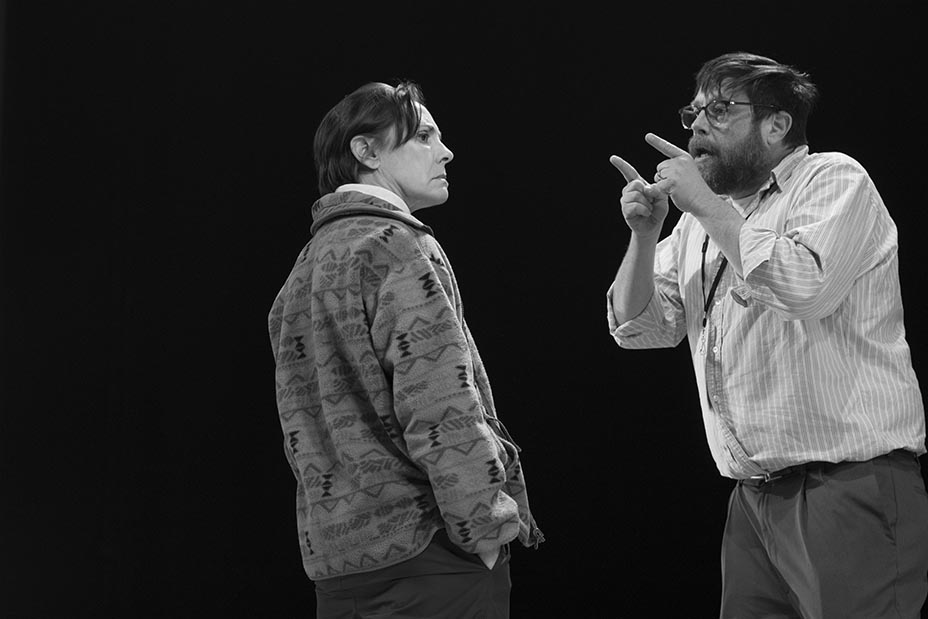 Hnath cautions in his script notes against casting Clinton lookalikes, or having the actors in any way imitate the speech and mannerisms of the real-life subjects. He also goes to laborious lengths to underline that he’s writing speculative fiction, wrapping the action in some half-baked cosmology about infinite universes in which every possible outcome exists.

In this particular version of familiar events, Metcalf’s Hillary is padding around a New Hampshire hotel room — arrestingly designed by Chloe Lamford as an austere white box, edged by Hugh Vanstone’s fluorescent lights — in a baggy turtleneck and sweatpants. She’s been campaigning in the primaries for about a year, and her fatigue is not helped by dwindling funds and predictions by TV news pundits, papers and polls that she’s going to lose the state. The efforts of her campaign manager Mark (Zak Orth, terrific) to bolster her spirits by putting an optimistic spin on things are unconvincing, her skepticism all too evident in the rubberized deadpan looks with which Metcalf shoots him down.

Sensing that Hillary is contemplating calling her husband, who’s off sulking somewhere after being kicked off the campaign, Mark urges her to resist. But the minute he exits the room after extracting a promise from her, she dials the number and Lithgow’s towering frame appears, filling the doorway.

Perhaps one of the most interesting angles of Hnath’s play is that while many of us assume the Clintons have a resilient pact of solidarity and friendship, able to withstand experiences that would break most marriages, the playwright has them living almost separate lives. Hillary still bristles at reminders of his philandering, and of the way people judged her for sticking by him, while he still shows sheepish traces of guilt. But she instantly goes into maternal mode, worrying if he’s been eating or getting out enough. 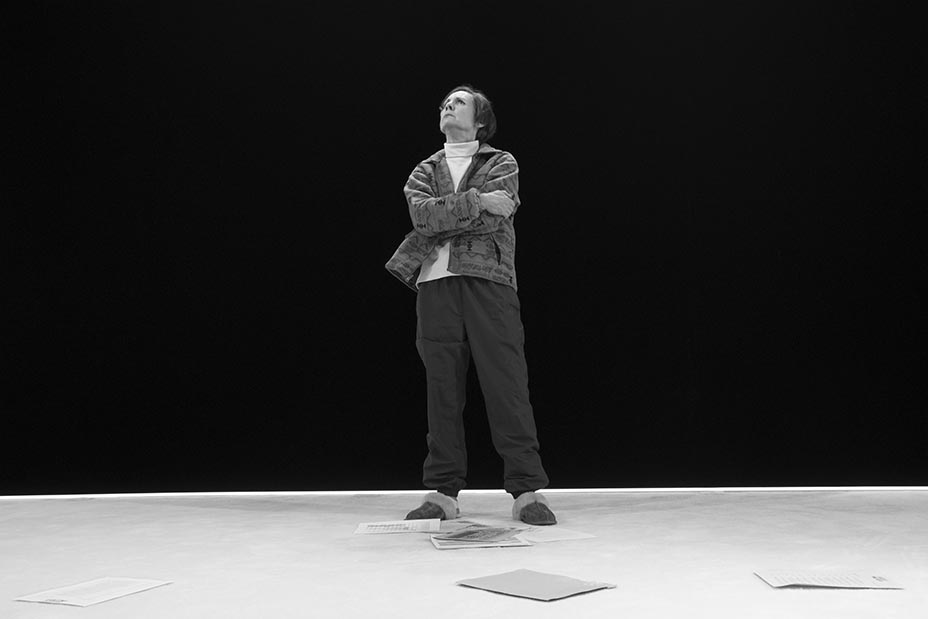 “I just like being useful,” he whimpers, in a petulant admission that conveys how much he’s missed the political arena. “I’ve been erased,” he whines later. “Like I never existed.”

There’s a zesty showdown between Bill and Mark, who has no use for the former president and his meddling. Lithgow’s bored impassivity throughout the campaign manager’s verbal assault is hilarious, not least because his long legs are dangling out of ridiculously skimpy running shorts. But this ain’t no Veep, and it’s when Hnath moves away from the specifics of the campaign — possible bargains with the Obama side, a surprise victory, the evidence of Bill’s hand in it — that the play acquires some nuance.

The closest thing to a heartbeat in the writing is the interplay when Hillary and Bill are alone, weighing the workings of their complicated marriage against their political moves, with a candor that could apply to any union between two equally driven partners.

The most affecting moments are when Hillary articulates the frustration of being the thankless half of the relationship, forced to listen as everyone tells her how inspiring Bill is, how he’s such a great listener, while she’s left feeling unheard and invisible — including to him. If people look at her at all, she thinks they see only disappointment. Metcalf is wonderful in these disclosures, bringing just the right edge of bitterness to her hurt. 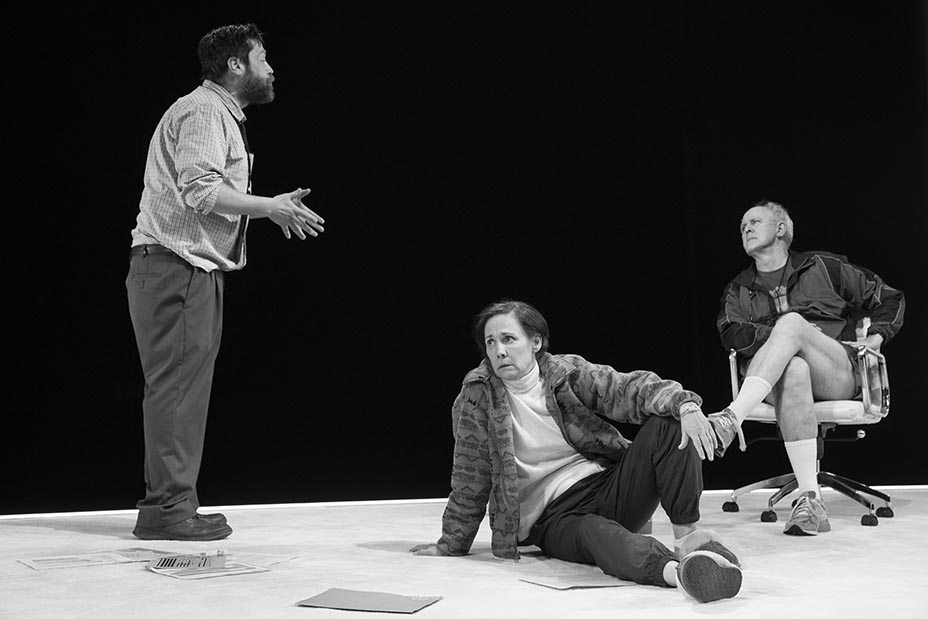 At its sharpest, the play reveals the Clintons to be each other’s biggest assets and biggest liabilities. Metcalf plays Hillary as a tenacious fighter, while Lithgow shades Bill’s tenderness toward her with antagonism, lending credibility to her underlying suspicion that he’s uncomfortable with the prospect of her winning. Whether this holds true for the actual Clintons is known only to them, but it applies to many marriages in which equal ambition is not matched by equal success.

Hillary alludes frequently to the injustice of all her knowledge and experience and achievements being invalidated by the preposterous issue of her likeability. That would seem to be an opening to explore the extent to which the simple fact of being a woman has undone her White House bids. But Hnath never really goes there, at least not with any satisfying depth, which feels like a missed opportunity.

Any reward generated by the more intimate exchanges between Hillary and Bill pretty much evaporates in a misguided scene in which a smug Barack Obama (Peter Francis James) steps in to do damage control. If Hnath seems ambivalent in his esteem for Hillary, his take on Obama is even murkier; this is a character who should have remained unseen.

There’s a numbing sense of futility in listening to Hillary predict in 2008 how an Obama presidency will play out: “It will take you four years to learn how to do any of it — and by then it will be too late. The people who want to end you will have formed their attack — and you’ll be on the defense for the next four, if you get a next four.”

Given the heavy liberal bias of New York theater audiences, you have to wonder what Hnath was aiming for as the play turns from a tragicomedy into a downer. Ultimately, it feels neither sufficiently contemplative nor revelatory, its ruefulness becoming merely a punishment.