The Democrats’ big loss could be MSNBC’s gain: The network of Bush-era backlash again finds itself in the opposition. But the impending Donald Trump presidency comes at a unique crossroads for cable’s left-ish news net. Reassured by much-improved ratings, MSNBC must choose between leaning back into a proven formula (covering a unified GOP government with a liberal slant, as it did to great success during the Iraq War) or preserving the mandate to focus more on breaking news. “Being in the opposition is always better for ratings,” says USC journalism professor Gabriel Kahn. “That has been true for Fox News during President Obama, and it should hold true for MSNBC during Trump.”

There’s little evidence of how MSNBC plans to handle the future — mostly because breaking news and politics continue to be one in the same. The network has made one key decision by keeping The 11th Hour With Brian Williams for now. The politics-focused late-night show originally was planned to last only through the election. Sources at the network say MSNBC still will become less partisan — an edict from Andy Lack, who assumed the role of NBCUniversal News Group chairman in 2015 and was tasked with igniting a ratings turnaround. “We made a conscious decision to not be just politics and point-of-view during the day,” says MSNBC managing editor Rashida Jones. “Politics will be a big part of our coverage through the inauguration. But it really is a daily assessment of what’s important.” 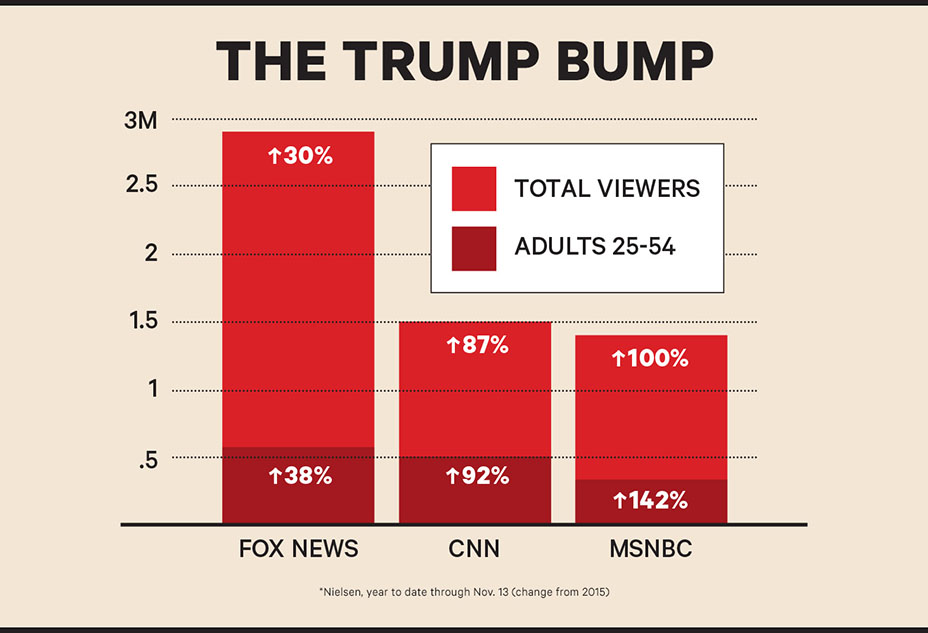 Although the network trails Fox News and CNN, MSNBC this year has grown its primetime average an unrivaled 142 percent among adults 25-to-54. Much credit there goes to lauded liberal Rachel Maddow, whose show remains the network’s top-rated. Another bankable success is the equally politicized Morning Joe, where host Joe Scarborough gives MSNBC its most consistent victories over CNN. Analysts say MSNBC might evolve into a hybrid — sandwiching broader news coverage and primetime commentary. Says Kahn: “This is a golden moment to stake out that ideological ground. In a crowded news environment, it doesn’t make sense for them to try to be anything but vaguely partisan. Otherwise, you’re melba toast.”