In the wake of Donald Trump’s failure to denounce neo-Nazis in Charlottesville quickly or sternly enough to satisfy his detractors, Hollywood has become a no-go zone for supporters of the president. “Don’t believe it? Try wearing a ‘Make America Great Again’ baseball cap on a film shoot,” quips one person who works in the industry.

THR reached out to more than 50 members of Friends of Abe — a private group whose membership is made up of conservatives working in Hollywood — to gauge their support, or lack thereof, for the president. Ninety percent refused to speak on the record. “Too hot. No way,” said one filmmaker. “No upside,” said another. Asked one actor, “Are you trying to get me killed?” Another said, “I’m staying away from politics for the foreseeable future.”

Actor Scott Baio has no such hesitation. “I don’t give a shit about Hollywood liberals,” he tells THR. “They’re gonna hate the guy no matter what. If he cured cancer, they’d be on him for putting oncologists out of business.” Baio, who became arguably entertainment’s highest-profile Trump supporter after speaking on his behalf at the Republican National Convention, says his support hasn’t waned and that everyone in his circle of acquaintances feels the same way, all the more so since Charlottesville — largely because of what they see as relentless attacks coming from late-night hosts, stars and the press.

“All this does is help Trump because people have had it. Conservatives in Hollywood have had it,” he says. “We know who Trump is, and we don’t believe the propaganda, and I don’t think most of the country does, either. The media is almost irrelevant. It’s predictable and boring. I want the man to get his agenda through, and everything else is a sideshow.”

Trump supporters in Hollywood “uniformly believe he is being attacked from all sides and that his quotes are being taken out of context,” says producer Frank DeMartini, who’s considering a run at unseating California Congresswoman Maxine Waters. “I’ve heard no one at all lose faith.”

The controversy in Charlottesville, where a woman was killed by an alleged white supremacist, went into overdrive after Trump condemned both sides — alt-left and alt-right — and Hollywood was incensed. “Equating neo-Nazis to those protecting civil rights is disgraceful & crazy,” tweeted Barbra Streisand. Americans “shouldn’t have to shame or pressure the president into saying Nazis are bad,” Seth Meyers said on TV. And that’s just scratching the surface on the amount of outrage.

But Justified actor Nick Searcy says many of his left-leaning colleagues in Hollywood are playing fast and loose with the president’s words. “Trump didn’t say some nice people were Nazis; he said there are some nice people who don’t want monuments torn down. This movement to erase the history of the Democrats’ support for the Confederacy and the KKK is ridiculous.”

Searcy says his own political opponents often take him out of context, so he knows what it’s like for Trump. “I’ll say the communist ‘Antifa‘ is bad, and they’ll twist it to say, ‘Nick Searcy defended Nazis.’ They’re so self-righteous,” he says. “It’s not that they disagree, it’s that they’re better people. They’re not better than me because they voted for Hillary Clinton.”

Searcy says he’s not sure whether he’s already lost work because of his politics, since no one alerts him when he’s eliminated from casting decisions. “It’s never been safe to declare you’re not a Democrat,” he explains before joking: “If you use my quotes, you’re going to have to support me — I mean by sending me money!”

That the president’s support has actually (mostly silently) increased since Charlottesville was a theme among Hollywood conservatives. “It has grown as the unhinged nature of the left has become desperate and hysterical,” says Evan Sayet, a former writer on Politically Incorrect who has helped write speeches for Trump.

“Compare the media coverage of Charlottesville to when President Obama failed to condemn terrorists,” says Sayet. “I even remember Obama trying to cover up for Islamic terror by dubbing the murders in Ft. Hood nothing more than ‘workplace violence.'” 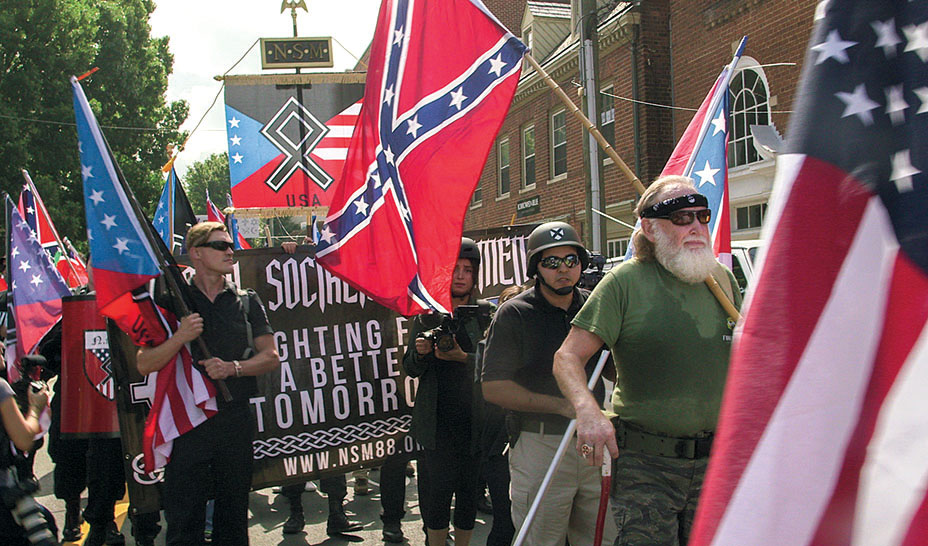 Mell Flynn, an actress who was a Trump delegate at the Republican convention, says the president has more supporters in Hollywood than many realize. “Hollywood conservatives are very hesitant to speak out in support of Trump because they fear that they will never work again,” she says. “There’s a lot of truth to that.”

She adds: “One producer told me Trump was right to call out the leftists who attacked the white supremacists since the latter had a permit and the former did not, but if he says this out loud, he’d never work again.” [Note: Trump’s claim that counterprotesters didn’t have a permit was rated “pants of fire” by Politifact, who published a copy of the permit.]

Baio is undeterred. “I don’t give a shit if I ever work again,” he says. “My country comes first. I guess I’m just an old, angry, successful white guy who stole everything he has from someone else.”

Haim Saban on Trump: “He’s Not an Anti-Semite”

“I disagree with the president with what appears to be a moral equivalence being drawn between the Nazis, who are shouting, ‘Kill the Jews,’ and the protesters who came to counter that statement,” says Haim Saban, the billionaire Univision chairman and Clinton backer. Still, “I do not believe that President Trump is a Nazi or anti-Semite.” Black Lives Matter, meanwhile, “is clearly an anti-Semitic, anti-Israel group,” he tells THR, citing BLM’s official platform that calls Israel “an apartheid state” responsible for “genocide.” — Tatiana Siegel