In a booth on the Westside of Los Angeles sit a trio of conservative provocateurs plotting their next “street art” prank on a liberal celebrity destined to be thrust into the limelight for reasons beyond the person’s control. The restaurant has become a watering hole for conservatives who work in Hollywood and don’t usually share their political opinions with their liberal colleagues for fear of retribution.

Friends of Abe, the private group of Hollywood conservatives, used to meet at the same place. The three artists, in fact were often spotted at FOA gatherings, where actors like Tom Selleck, Gary Sinise, Robert Duvall, Kelsey Grammer and Patricia Heaton generously hobnobbed with others in the entertainment industry who lacked their fame and fortune.

One of the street artists usually works independent of the others, but recently they’ve banded together to focus their efforts on Harvey Weinstein and all those who, they claim, allegedly enabled his predatory behavior for decades. Their aim is to call out Hollywood for its “hypocrisy,” they say. Two of them have careers in the industry to protect so they remain anonymous, and their anonymity is fodder for detractors who take to social media to call them out for cowardice and slander.

One justifies his secrecy by noting he’d surely be fired for his very public artwork — which sometimes amounts to attacks on actors, movies and TV shows he is associated with through his full-time job. Another is a freelancer in the industry who used to design interactive media for Steven Spielberg.

These three are the artists who were responsible for the latest images targeting Meryl Streep, where posters were peppered throughout town featuring her image next to Weinstein’s with the text, “She knew,” across her face, a reference to allegations made by actress Rose McGowan that Streep did not speak out sooner against the disgraced mogul. Streep next appears in Spielberg’s The Post, a movie about the Pentagon Papers that 20th Century Fox is opening today.

“They’ve injected themselves into politics so audiences can no longer suspend belief. They’re ruining Hollywood,” says one artist. “I love Streep, but she’s a weapon on the left, and we have to take out the left,” says another.

The Streep posters made global news, including TV outlets across the country and in Europe running stories about them. It was one of the rare collaborations of the three artists: one pitched the concept with “I knew” written in black and white across Streep’s face and only a hint of an image of Weinstein; another added more Weinstein; another changed the text to “she knew” and made the strip across her face red, a nod to artist Barbara Kruger, who pioneered the look.

Streep didn’t respond to a request for comment but previously issued a statement denying McGowan’s claims. “I want to let her know I did not know about Weinstein’s crimes, not in the ‘90s when he attacked her, or through the subsequent decade when he proceeded to attack others,” she said. 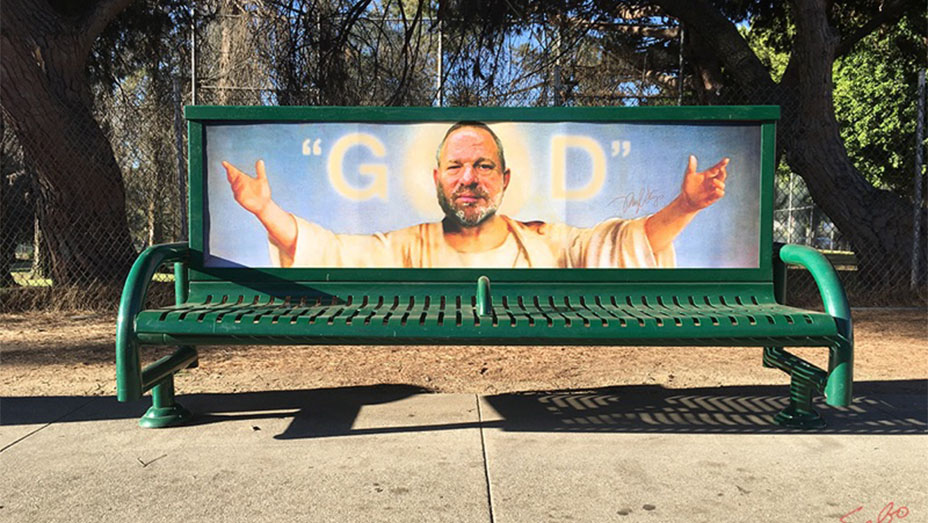 On Friday morning, one of the artists, Sabo, hit Streep, Weinstein and The Post again, and this time added Tom Hanks. On bus benches near Los Angeles, he has Weinstein, arms stretched as if he’s Charlton Heston as Moses in The Ten Commandments, with the word “God” across his image. Other benches have Streep and Hanks, backs turned, with word bubbles: “I knew,” Streep says. “We all knew,” says Hanks.

These anonymous street artists feel that conservatives are less outspoken on social issues and apparently want to even the score. “You can count them on one hand, and they’re not grabbing microphones and pontificating. Jon Voight only gives his opinion when he’s asked,” one says. (Though they acknowledge exceptions, like when Clint Eastwood and Scott Baio spoke at different Republican National Conventions.)

Two of the artists often work as a team and claim they are financed by wealthy conservatives who pay them $5,000 to $20,000 per mission, each one set up through intermediaries so that most of the time they’re not sure who is paying them. Sometimes they’re left alone to create, sometimes the financier needs to grant approval before the work is posted for all to see. “For $20,000, they’ll get $200,000 in impressions,” says one.

After a terrorist killed 49 people at a gay nightclub in Orlando last year, the artists created a combination Gadsden flag, with the don’t-tread-on-me snake, over the rainbow flag with the text: #ShootBack, and posted them all over West Hollywood. “The mayor spent the rest of the day saying things like, ‘The poster doesn’t represent our values,’ but in all the comments of the news stories that were generated, gay men and women were saying they agreed with us and that they were planning to buy a gun,” one artist claims. 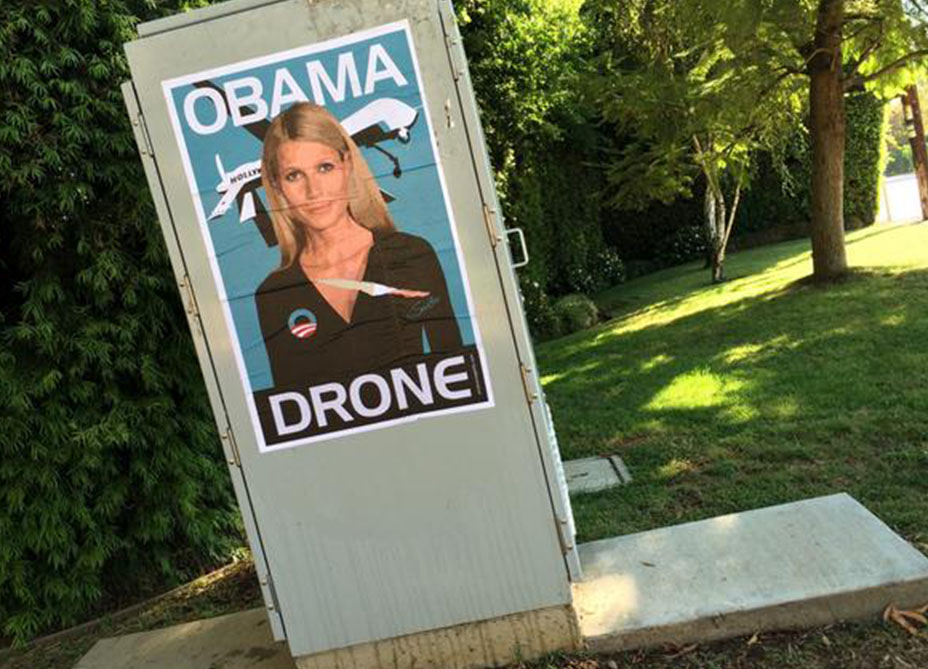 Another piece that got a lot of attention consisted of a photo of President Barack Obama next to the American flag, but the image was ripped in half to separate Obama from Old Glory and the text read: “Conscious Uncoupling,” a phrase made popular by Gwyneth Paltrow when she split from husband Chris Martin. The posters appeared all over Paltrow’s neighborhood in 2014 on the day she hosted a fundraiser for Obama at her home.

The third artist in the booth is a semi-exception to the unwritten rule of anonymity. He finances his own efforts then sells versions of the street art on his website, and he goes by the pseudonym Sabo. Since he earns a living as a freelance artist he doesn’t fear workplace retribution, or even visits from law enforcement. Such was the case in 2014.

In that instance, Sabo, too, hung posters near the Paltrow fundraiser — his calling the actress an “Obama Drone.” Afterward, he tweeted: “It really would be a crying shame if someone called to report a man with a rifle in the area on this night,” then he tweeted again, “Dear God! I hope you make zombies real and the first one I hope reanimates is Oswald.” When he was alerted he would be paid a visit by two Secret Service agents, he prepared by wallpapering his apartment with the word “Oswald” over and over, then he videotaped the encounter and posted it on YouTube.

At this particular gathering of artists, the attendees are talking strategy. Sabo’s idea is to create faux milk cartons with Matt Damon’s photo on them as a missing person, a reference to the actor skipping the premiere of Downsizing. Damon said it was because he was dealing with a family matter, but conservative media reported that it was because he was facing backlash from a Business Insider interview where he defended men in Hollywood who are innocent of sexual harassment. Damon did not respond to a request for comment, which is often the case when a celebrity is featured in street art. 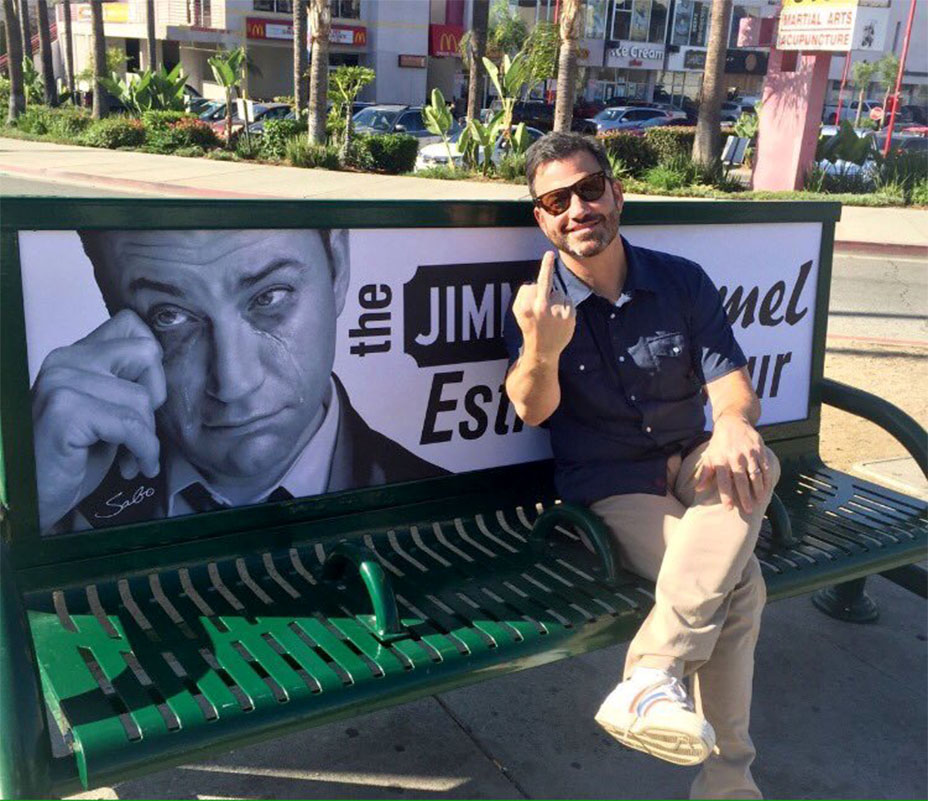 An exception was when Sabo attacked Jimmy Kimmel by calling him a “cry baby” on bus-stop benches all over L.A. In that case, Kimmel responded by photographing himself sitting on one of the benches giving Sabo the finger, then he sent a photo to THR. Posters attached to bus-stop benches are also carefully manipulated to appear like real ads, and their work is usually done at around 3 a.m., after bars in Los Angeles have closed and would-be witnesses are no longer roaming the streets.

In rare cases, Sabo has hijacked entire billboards, like when he added an image of Al Franken to one advertising The Greatest Showman to make it look like the senator was groping Zendaya, who stars in the movie that Fox opened Wednesday. Franken has since resigned amid allegations he groped women.

Sabo is a former tank commander who took his pseudonym from the word “sabot,” a certain kind of projectile fired from a tank gun. He also has fans in conservative political circles, claiming that he knew in advance when a U.S. Army vet was about to accuse Franken of sexual misconduct so he timed his billboard to the event.

Sabo says he hires others to help him post his artwork all over town in the wee hours of the morning before the sun rises, and two of them helped him with the Franken billboard mission, using a 28-foot ladder purchased for Sabo by his friend Milo Yiannopoulos. “I have a crazy person who works for me who didn’t need a harness, and the other didn’t know where to hook on with his harness,” he recalls.

Sabo stood outside, gazing at his handiwork for several hours that day, watching the reactions to the billboard, so he was conveniently there when a TV news crew showed up and obliged them with an interview, and when workers showed up to restore the billboard, he filmed them doing so. The conservative is planning another takeover of a billboard, and all three of the artists are mulling pranks for the Jan. 7 Golden Globe and March 4 Oscar telecasts. 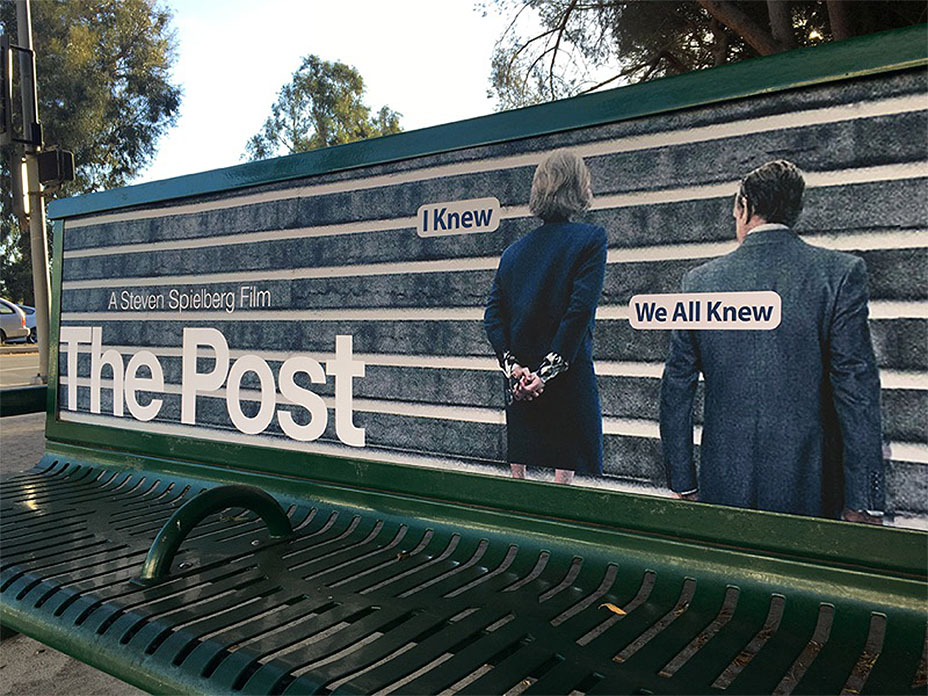