The Miller family belonged to the Santa Monica Synagogue only for two or three years — enough time for their eldest son, Stephen, to graduate Hebrew school in 2001. Miller’s young face, with a grin, peeks out from the corner of that year’s confirmation class photo, which hangs on a back wall of the temple, near a toilet and rec room. “We did our best here to teach Stephen the ethical standards of Judaism,” says Jeff Marx, the Reform synagogue’s longtime rabbi, who tutored Miller and appears with him in the class portrait.

Sixteen years later, Miller’s picture is all over the place, but the progressive Jewish community that helped raise him is struggling to fathom how a native son found an intellectual home with President Donald Trump and his allies. “He certainly grew up here having a knowledge base” of Judaism, says Marx, a bearded, kindly man who shrugs and lifts his hands in a gesture of helplessness, unwilling to say more.

As a senior White House adviser, Miller, 31, is one of Trump’s policy wonks and a regular surrogate for the leader of the free world on talk shows. He’s also a key architect of some of the administration’s most exclusionary initiatives, including the yet-to-be-implemented Muslim ban and the proposed border wall with Mexico. For a Jewish community already wary about anti-Semitic attacks and an uptick in hate speech, Miller’s positions have struck a nerve. Roughly two-thirds of Jews vote reliably Democratic, according to polls. And while millions of Jews went for Trump, Miller’s push to target specific ethnic or religious minorities has Jews in both parties nervous. 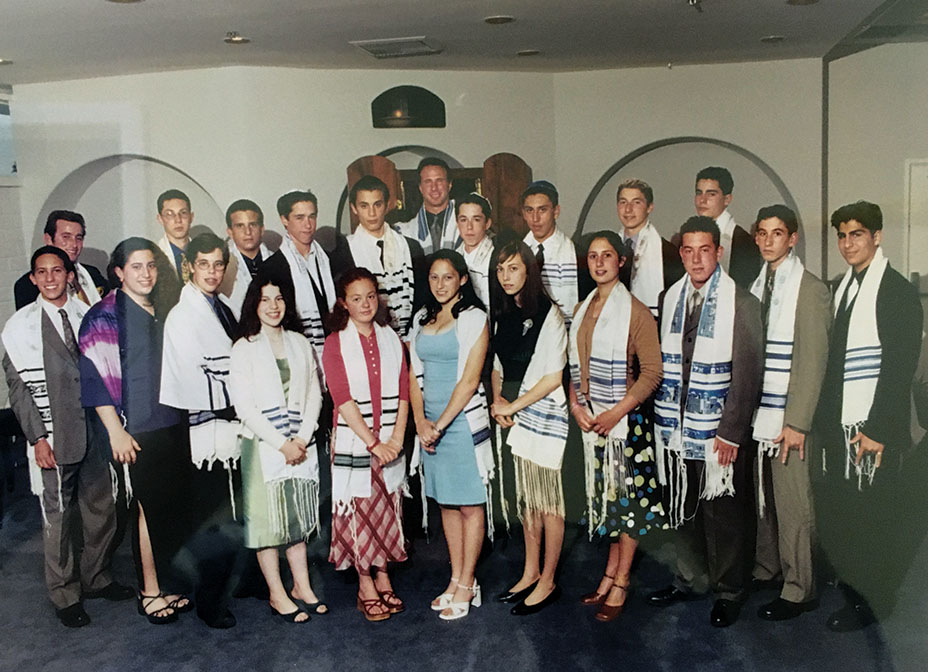 In response, two dozen top Jewish thinkers in L.A. recently formed Jews United for Democracy and Justice, which advocates “against the normalization of hate acts and speech” resulting from Trump policies. The entertainment industry is well represented among its 2,300 members, which include actresses Mayim Bialik and Michaela Watkins, director John Landis, comedy writer Rob Kutner, producer Amy Ziering and TV exec Nina Tassler. “Miller is not the only Jew who is supportive of these policies, but he’s in a position of great influence,” says co-founder Rabbi Ken Chasen.

Although recent media reports have suggested that Miller’s parents were liberals typical of the progressive enclave of Santa Monica, members of the Jewish community insist otherwise. Steven Windmueller, a professor of Jewish Communal Service at the Hebrew Union College-Jewish Institute of Religion who has known the Millers for many years (“a lovely couple”), says their political leanings align closely with their son’s. “They have been and are conservative Republicans,” he says. One person acquainted with the Millers says they departed the Santa Monica Synagogue when it became clear they “weren’t a good fit” with its reform-minded congregation.

Trump’s unforgiving antagonism against perceived enemies aligns closely with Miller’s temperament. At Santa Monica High School, he fought with teachers and students about what he saw as unfair liberal bias. He penned furious editorials in the school newspaper. In one, after 9/11, he railed against Islam and said Osama bin Laden would “feel at home” at Samohi. After much haranguing, he successfully got school administrators to enforce a state law requiring students to recite the Pledge of Allegiance. He made several appearances on Larry Elder’s conservative talk show and became friendly with conservative writer David Horowitz. He belittled diversity clubs and complained about letting Latino students speak Spanish. Often, his ideas fell flat. “There was a general undercurrent of ‘f— that guy,’ ” says Jake Zambas, who was a friend of Miller’s and a fellow conservative for a time. “If he’d gotten beaten up, it would have just reinforced his narrative.”

Miller’s time in Hebrew school didn’t temper his views. Taylor Brinckerhoff, who spent many Passovers at the Miller household as a boy, is confounded about what role Miller’s Judaism plays in his thinking. “I’d be interested to know whether he still identifies as being Jewish,” he says. 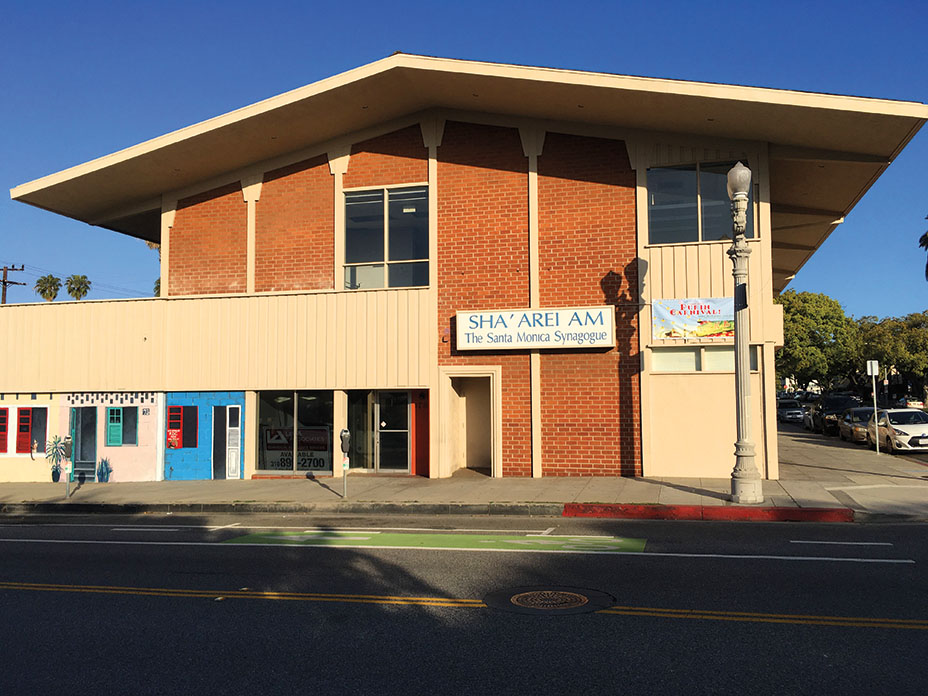 Since the election, Miller has been a constant topic of conversation among former students at the synagogue and at Santa Monica High School. “He never strongly identified as a Jewish person,” says Charles Gould, a comedian with numerous TV credits who recalls the day Miller took the stage in the high school auditorium. He already had a reputation as a contrarian who was openly anti-immigrant (and, in a widely reported incident, had abandoned one friend because he was Latino). On this day, Miller argued that students shouldn’t have to pick up their own trash — that was janitors’ work. Some found it funny, but the crowd booed Miller off the stage. Gould expected Miller to be deflated afterward. “But he was ecstatic,” he recalls. “He said it had gone exactly as he’d wanted.” Now, Gould, who also is Jewish, struggles with Miller’s newfound power. “I can’t begin to explain what it’s like to have actually heard racism come out of the mouth of a person who has influence over legislation in this country,” he says. Adds Justin Gordon, who attended Hebrew school with Miller, “A lot of people who went to school with him are sick to their stomachs.”

Miller’s positions on refugees irk some Jewish thought leaders, who think his views could do lasting harm to America and the Jewish community. His own great-grandparents settled with other immigrants in Pennsylvania. “If I had the chance, I’d ask him about his own family’s history,” says Rabbi Sarah Bassin, of Temple Emanuel in Beverly Hills and a board member of Newground: A Muslim-Jewish Partnership for Change, “hopefully to elicit some degree of empathy for families that are experiencing the plight that I’m assuming his family experienced a few generations back.” 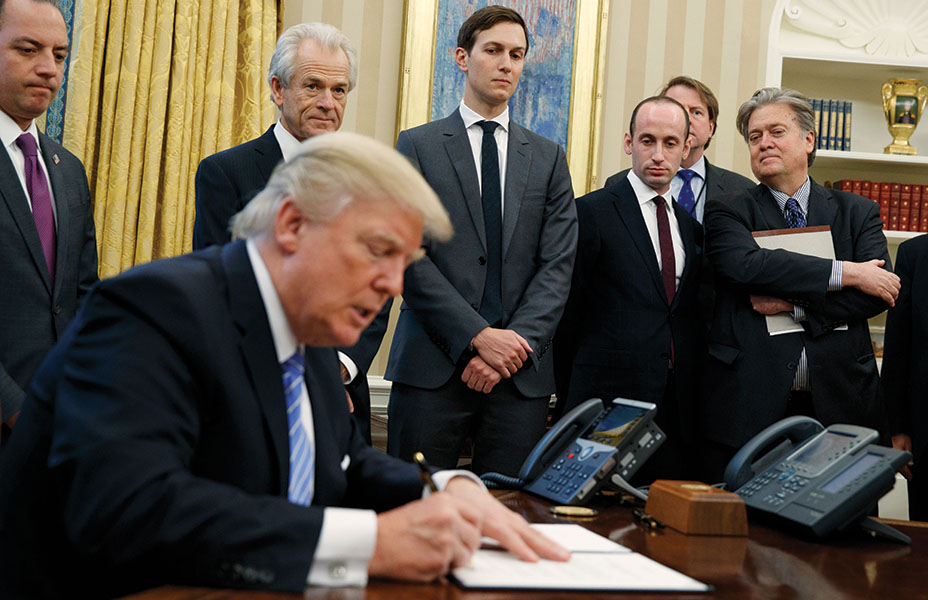 Others wonder how Miller’s upbringing among L.A.’s Westside elite impacted his views. For a time, he grew up north of Santa Monica’s Montana Avenue, which many say serves as a dividing line between the truly rich (those to the north) and the reasonably well-off. They say such tony Westside neighborhoods aren’t the bastion of liberalism they’re made out to be. Gould, for one, recalls a deeply segregated community. “When I was growing up, Samohi wanted to believe its own liberal narrative, but I don’t believe it’s true,” he says. “The area we grew up in was absolutely segregated. I think there was a simmering, underlying racism that pervaded L.A. in general.” Others agree. “We shouldn’t assume that racism doesn’t exist in a liberal environment,” says Oscar de la Torre, who taught Miller in high school. “In Santa Monica, racism, xenophobia, homophobia, all those things exist.”

By all accounts, Miller’s family has felt pressure because of his career arc. One current Santa Monica Synagogue congregant says a few friends have stopped talking to the Millers. A neighbor, also Jewish, is leaning toward posting lawn signs that will read “Refugees and Immigrants Welcome Here,” “No Muslim Ban,” “No Border Wall” and “Our Communities Stand Tall.”

“We’ll try to get as many of these on the block as we can,” the neighbor says. “Maybe the Millers will get the message.”