Continue to The Hollywood Reporter SKIP AD
You will be redirected back to your article in seconds
Skip to main content
February 18, 2019 11:52am

Two separate groups of conservative provocateurs took their fight against what they call the media’s “Trump Derangement Syndrome” to the streets of Los Angeles early Monday morning, posting phony entertainment ads all over the county.

Of the more ambitious efforts, an entire billboard advertising HBO’s Last Week Tonight With John Oliver was hijacked so that now the title is: “The Orange Man Bad Show With John Oliver.”

The giant billboard at the corner of La Cienega Boulevard and Pico Boulevard has an image of Oliver with a thought bubble cursing the Trump presidency and including the words “racists” and “bigots.” At the bottom of the altered ad is the phrase, “Matrix approved NPC programming.”

The endeavor is the second in a series for a secretive group known as The Faction, which in January took over a billboard advertising Real Time With Bill Maher, also an HBO show. Both times, The Faction used “NPC” to belittle the comedians as “non playable characters,” a video game term that has become a conservative meme for media personalities who allegedly work harder at advancing a politically correct narrative than the truth.

The Faction previously made a name for itself by installing dozens of phony Trump stars on the Hollywood Walk of Fame, a reaction to a few anti-Trump activists who destroyed the former TV star’s real one.

Working separately but in the same area on a similar theme, a different street artist criticized Jussie Smollett in several locations over the Empire actor’s assertion he was the victim of a hate crime nearly three weeks ago. In multiple locations in and around Hollywood where ads for movies normally appear — such as at bus stops and Redbox kiosks — Smollett’s image has been inserted along with text designed to demean him.

The phony movie ads are the work of Sabo, who often lampoons Hollywood’s liberal-leaning reputation. For example, a year ago just prior to the Oscars, he hijacked three billboards in Los Angeles for the purpose of excoriating Hollywood over its numerous sexual abuse scandals.

A faux ad features Smollett as the Black Panther — sort of. In the Marvel film distributed by Disney, Chadwick Boseman plays the superhero, though in Sabo’s version of the poster Smollett looks a lot like the real thing, only he’s called “Black Prankster.”

Smollett, who stars on Fox’s Empire, told Chicago police that he was attacked Jan. 29 by a pair of white racist, homophobic supporters of President Donald Trump. On Sunday, though, CNN reported that police “believe actor Jussie Smollett paid two men to orchestrate an assault on him that he reported late last month.”

In another faux ad that Sabo distributed Sunday night throughout the Hollywood area, Smollett is seen on the poster of BlacKkKlansman, director Spike Lee’s film from Focus Features about two cops, one black and one Jewish, who infiltrate the Ku Klux Klan.

In the poster created by Sabo, Smollett, a frequent critic of Trump, is standing in front of an American flag wearing a cap exclaiming, “Make America Great Again,” while written above the stars and stripes are the words, “This is MAGA Country,” the phrase Smollett told police that the perpetrators uttered as they allegedly committed their hate crime. 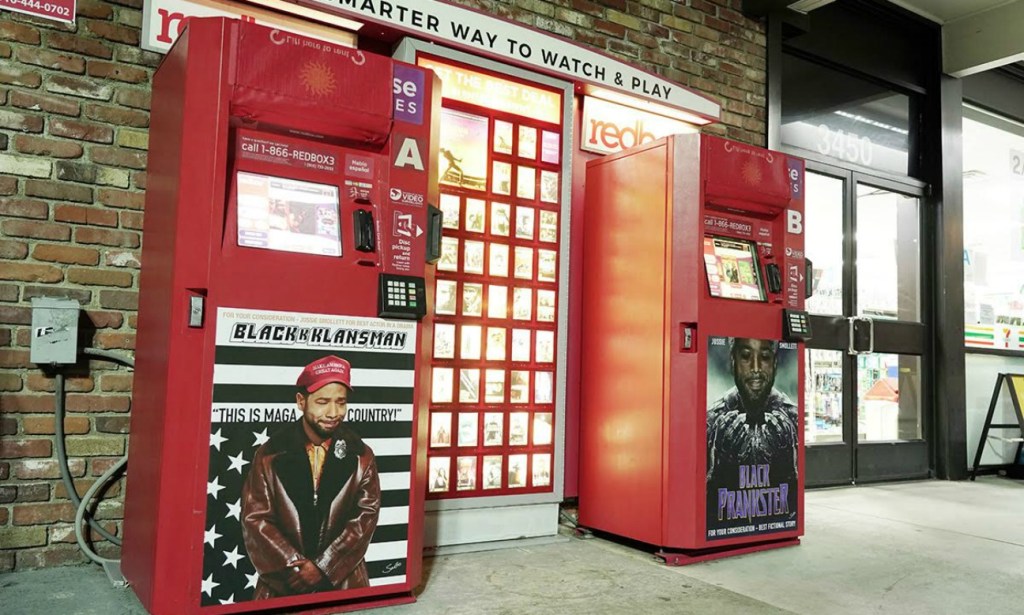