Before he gained fame as Sen. Kamala Harris’ husband, entertainment litigator Doug Emhoff made headlines for his connection to another famous face: the Taco Bell Chihuahua.

Around the turn of the century, “Yo Quiero Taco Bell” was a familiar refrain thanks to a series of ads featuring the live-action pooch that was developed by his client TBWA. The quirky creature sparked a lawsuit from a Michigan company named Wrench, which said it had created the “Psycho Chihuahua” character for Taco Bell. Wrench sued for breach of contract and was awarded $42 million. Taco Bell tried to pin the bill on its ad agency, but in 2009, after multiple trips to the 9th Circuit, Emhoff kept TBWA off the hook.

Emhoff’s legal career has put him on the path toward potentially becoming the first gentleman of the U.S. In 2013, PR consultant Chrisette Hudlin set up the divorced dad of two on a blind date with her friend Harris, then California’s attorney general. When asked for details, he quips that they’re all in her book, The Truths We Hold. It’s true: Harris describes everything from their first text exchange (which happened while Emhoff was at a Lakers game) to how she wore Chuck Taylors and brought cookies when she met his kids. (Their engagement story is too cute to spoil.) They married in 2014, and she quickly rose through the political ranks (she’s now climbing in the Democratic primary race polls, chasing Joe Biden and Bernie Sanders). 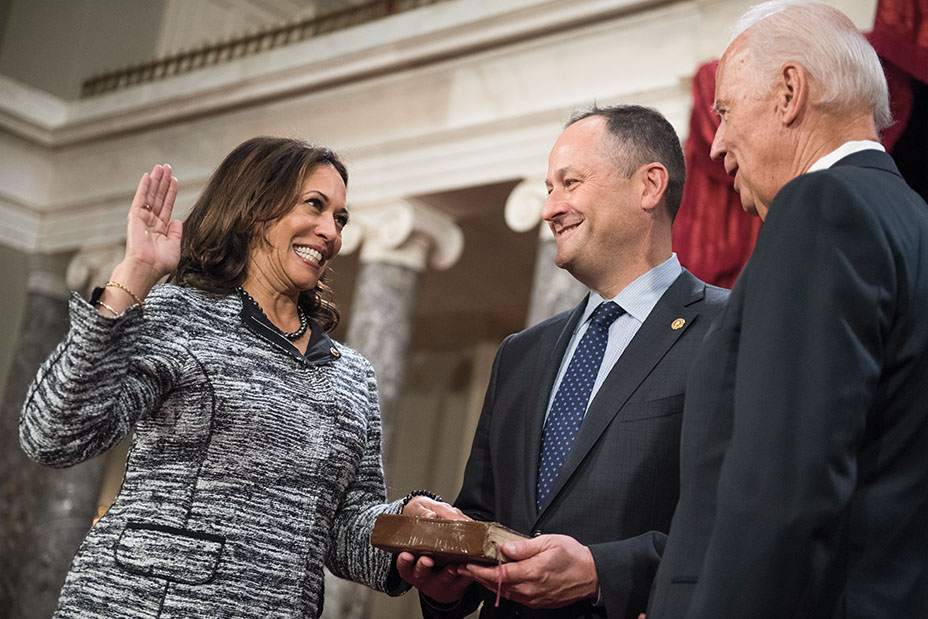 Meanwhile, Emhoff, 54, has continued to build an entertainment litigation practice representing studios and streamers in everything from copyright disputes to contract issues and antitrust matters. He joined DLA Piper from Venable in 2017 and now splits his time between Washington, D.C., and L.A., where he’s lived since high school. (Emhoff was born in Brooklyn “before it was cool” and moved to SoCal as a teen.) The Agoura High alum says he wanted to be a lawyer as a kid and the dream stuck.

After graduating from the USC Gould School of Law, he took a job downtown in Pillsbury Winthrop’s litigation group. He found the idea of entertainment litigation compelling but wasn’t able to explore it until the late ’90s when he moved to a boutique firm on the West Side called Belin Rawlings & Badal. “That was my shot to not only build my own practice but also to break into the field,” he says. One of his first cases was defending Hollywood Video in an accounting dispute with Fox, which led to ongoing work with the studios — and representation of dozens of production companies in an industry-wide late-payment class action in the early aughts. In 2000, he opened his own Beverly Hills firm with fellow USC alum Ben Whitwell. It grew to 12 attorneys before it was acquired in 2006 by Venable, where he spearheaded the firm’s West Coast expansion.

“With all this other stuff that’s happening in my life right now, it’s great to have [my practice,] because it’s something that I love and I’m good at,” he tells THR. And by “stuff,” of course, he means his wife’s campaign for president.

The experience has been “endlessly fascinating” for Emhoff, who says he now gets stopped for selfies. He’s focusing on business as usual as much as he can until November 2020, while doing what he can to help her on the side. Emhoff won’t tip his hand on whether he intends to practice full-time in D.C. if Harris wins the election, though he’ll quickly correct that it’s a “when,” not an “if.”

A version of this story first appeared in the March 27 issue of The Hollywood Reporter magazine. To receive the magazine, click here to subscribe.