Despite the fact that Human Rights Campaign honoree Christina Aguilera was absent without explanation from Saturday’s evening gala, the Ritz Carlton/JW Marriott LIVE event was well attended by members of the LGBTQ community and allies coming together to celebrate diversity and common goals. Among the VIP guests were Democratic Sen. Kamala Harris, Sen. Cory Booker, actress Yeardley Smith and political strategist Chad Griffin, all of whom addressed the crowd with energetic speeches that touched upon critical social and political issues facing Americans today.

Prior to the main event, a blue carpet set a comfortable tone for the honest conversations that took place over the course of the night. The Hollywood Reporter asked Betty DeGeneres, the mother of comedian Ellen DeGeneres and a rigorous LGBTQ activist, how the idea of equality has changed for her over the years, to which she replied, “Not enough. We seem to have taken a few steps back with this current political climate, so we just have to keep on speaking about acceptance for everybody.”

Asked whether gay or sexually fluid roles should be limited to authentic performers, Marcia Gay Harden recalled to THR that she played a trans role about 15 years ago and her son Hudson had said to her, “Mom, you shouldn’t have done that.” Of the current social climate, Harden said, “Now, it seems like there are enough trans actors around who can really do it.” Hudson, who was beside her on the carpet, added, “There are trans actors who have really lived their lives and deserve those roles.”

On the idea of evolving equality, Harden continued, “When I was growing up, no one talked about gay people…until my first boyfriend was gay,” she laughed. “I’ve been in the theater, I’ve been in this business for a long time, it seemed like a whole awakening of a different world, and why is this world not known and publicized like any other world?”

HRC honoree Smith, the voice of Lisa Simpson, spoke to THR about what it means to receive a recognition of national leadership as an LGBTQ ally. “It’s so humbling, I’ve been a big supporter of LGBTQ rights for a long time. You certainly don’t do it for recognition, you do it because you believe in it and it means something to you and you’re moved by any little measure of progress that we make.” Considering the character of Lisa and why she is still held in such high regard throughout all these years of The Simpsons, Smith shared, “She’s one of the best characters of all time — compassionate, empathic, genuinely curious about people — who are you, what is your experience, how can I know you? I do think that curiosity keeps your mind open, and as soon as you lose that curiosity, all is lost. Despite the fact that the writers in every episode give her something and then take it away, that girl has more resilience than anyone I know.” 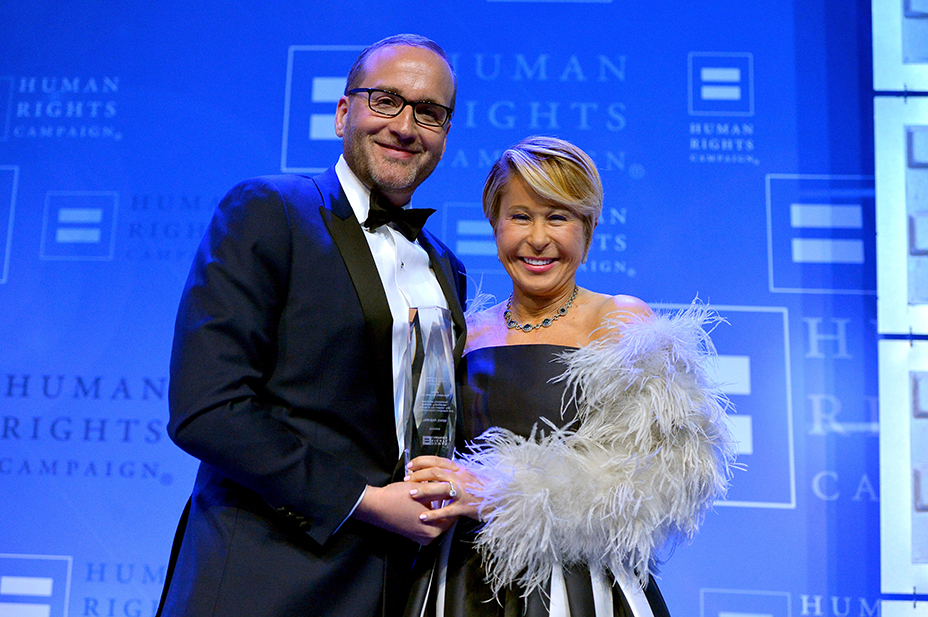 Lea DeLaria from Orange Is the New Black offered a view of what overall equality would look like to her and her family. “The color of my skin, what I weigh, how short my hair is, who I put my fingers inside and whether I sit down to pee or not — none of that matters anymore, and what makes us what we are is our opinions and what we do in life and we all start on a level playing field,” the actress shared with THR. “That doesn’t exist now, we know it doesn’t. I have to be twice as competent as the next person just to be thought of as not incompetent, you know what I mean? So when that no longer exists, then we have equality.”

Inside the auditorium, figure skater Adam Rippon reminded the audience that 50 percent of Americans live in one of the U.S. states that doesn’t have full protections for LGBTQ citizens. The Equality Act was reintroduced into Congress on March 13, its themes highlighted in the Americans for Equality Act video, featuring Sally Field, that was then shown.

“I’m proud to be an American for the Equality Act.”@Sally_Field & her son @SamGreis discuss the need for Congress to pass the #EqualityAct, which would extend non-discrimination protections for LGBTQ people nationwide, in a video series from @HRC, @DLanceBlack & @Harparbar. pic.twitter.com/tldIjtkVXB

Singer Shea Diamond took to the stage, followed by HRC directors Gwen Baba and Chris Boone who thanked Griffin for transforming the organization into a “political powerhouse.”

Next up at the podium was Rob Reiner, a longtime supporter of LGBTQ rights. Having known Griffin since he was 19 years old, Reiner spoke about how the activist “transformed equality in the deep South” and was the “mastermind behind [the undoing of] Prop 8.” He went on to consider the way forward for politics, telling the audience, “We all know what we need to do in 2020.” The director added that, after the Senate and White House are ours, “maybe we can have a decent country.” 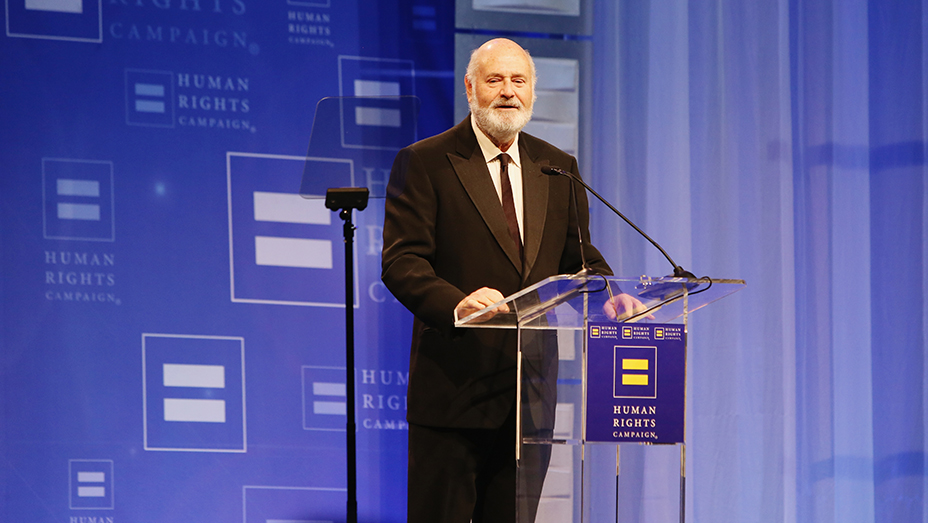 In the HRC video, Griffin said, “The LGBTQ community is as diverse as the fabric of our nation, and when you attack one of us, you attack all of us.” At the podium, he recalled the time when he told Reiner and his wife that he was gay, going on to describe their positive reaction.

Referencing the current political state of affairs, Griffin said, “We are living through some dark times, and the headlines couldn’t be any worse.” He then added that despite everything, he remains more hopeful than ever in the power to make change. “We are on a path toward a brighter tomorrow. More women, more people of color and more LGBTQ people are running for office,” Griffin said. He described LGBTQ voters “turning out in force” and gave a message for anti-LGBTQ politicians: “If you come for us, we’re coming for you on election day.” Griffin, who is departing the organization in 2019, received a standing ovation from the HRC audience.

Taking the stage to share a personal story, Blossom Brown talked about growing up in Mississippi where she had to change her field of study from nursing to public health because she was not widely accepted as a trans student. Brown went on to become the first transgender woman to graduate from the Mississippi State College for Women, and is now a “proud transgender woman of color living with HIV.” She told the crowd that most trans women don’t live past the age of 35, encouraging guests to support the HRC and fill out pledge cards.

Upon her turn, comedian Dana Goldberg announced, “We’ve survived two years of this administration.” She talked about how, in over 30 U.S. states, you can still be fired for being a member of the LGBTQ community and how trans people are in “grave danger” in public. “We have to remain steadfast as we move toward the 2020 election,” said Goldberg after she orchestrated the auction and raising of $50,000 toward the HRC’s efforts.

As Sen. Booker took the podium, he, too, referenced the current political climate. “We have a moment now where outrageous things are happening,” said the 2020 presidential candidate, going on to talk about the Trump administration’s discriminatory attitudes toward LGBTQ issues. Booker described a woman who lived in his apartment building long after her son was murdered there, recalling what she said when he asked her why she didn’t move somewhere else: “Hope is the active conviction, despair will never have the last word.” Booker used the rest of his time on the stage to encourage the audience to “swear an oath” where we stand up as an equal nation, a nation of love.

While receiving her award from Griffin, Smith joked about many “sleepless nights” in trying to come up with an appropriate speech. “I am so glad I’m here, because at the center of this extraordinary honor is the chance to thank you,” said the actress. Then came another joke, “Being an icon and having a pile of money brings the chance to make a difference.” Striking a serious note, Smith said that she’s often asked in interviews why she’s such a strong supporter of LGBTQ rights, but that the question makes little sense to her because the fight is an obvious one. “You do not get to cherry-pick someone’s rights,” she said simply. “I am here to vote to stop the systematic assault,” Smith added, referring to the current administration.

Sen. Harris said at the podium, “We are in the midst of a whole situation, this is an inflection point in our history.” She invited everyone to look in the mirror and ask the question: “Who are we?” Answering it for herself, Harris said, “We are better than this.” She continued by noting that this inflection point is inspiring us to “restore the importance of truth and justice,” adding that “speaking the truth can make people uncomfortable,” yet implying it must be done. She said that we all must speak our truth to rise above the homophobia, xenophobia and anti-Semitism in our country, which are “born out of hate.” Harris added, “We must stand together and never let anyone stand alone in their fight.”

“Let’s speak the truth about what’s really going on,” said the Democratic Senator. “Let’s pass the Equality Act in the U.S. Until all of us are equal, none of us are equal.” She concluded that the majority of us “have more in common than what separates us,” calling our nation “aspirational” and “founded in noble ideals.” Said Harris, “We’ve not yet reached those ideals. [But] don’t let the bad guys win.”

As the event wound down, Australian singer Betty Who gave an a cappella performance as the microphone gave out. The technical team swooped in by the second song, a cover of “I Love You Always Forever” by Donna Lewis.

Talking about how the LGBTQ community has made her feel more comfortable as a performer, the singer concluded, “Being on stages in front of LGBTQ audiences are the best shows I’ve ever played.”