Unlike millions of people who were checking news reports into the wee hours on election night, actor and activist Kendrick Sampson decided not to monitor incoming results.

“I made a commitment a long time ago that I wasn’t going to stress myself and be on an emotional roller coaster, but I would focus on my mental health,” Sampson, who stars on HBO’s Insecure, tells The Hollywood Reporter. “So I personally did not watch any election coverage that night. I spent time with people who I love truly and dearly. We had a little social distance card game, played spades, and ate good food and loved on each other.”

The next day though, Sampson, founder of the racial justice group BLD PWR, was celebrating, even despite the lack of a call in the presidential race and reports that Democrats were likely not to flip the Senate. That’s because early reports were showing that a progressive shift was underway in Los Angeles, led by early results showing that self-styled reformist prosecutor George Gascón was likely to oust incumbent Jackie Lacey to become L.A. County’s next district attorney. For months, Sampson had shown up nearly every Wednesday to join a weekly protest that had been led for three years by Black Lives Matter L.A., chanting “Jackie Lacey Must Go” over her handling of fatal shootings of city residents by police.

On Wednesday, Nov. 4, Sampson — whose organization BLD PWR began partnering this year with BLM-LA on the Lacey protests — was outside her office once again. This time, the gathering was billed as a “Jackie Lacey Will Go Celebration!”

“BLM-LA has done unprecedented organizing and I’m proud to be in community with them,” says Sampson, by phone, not long after leaving the event. “This is the biggest county in the U.S., which makes it the most powerful district attorney seat. This win is proof that — when we work together, coalition building and organizing — we can and we will hold any district attorney and any elected official accountable in any way we possibly can by any means necessary.”

A number of other races will likely take Los Angeles more leftward as well. In the race for Los Angeles County Supervisor in District 2, State Sen. Holly Mitchell — endorsed by Bernie Sanders — won a decisive victory over L.A. City Council Member Herb Wesson Jr., setting up an all-female board of supervisors for the first time. Activists are also cheering the passage of Measure J, which would require L.A. County to spend 10 percent of locally generated unrestricted funds in its annual budget on alternatives to incarceration, such as job training, affordable housing and mental health services; BLD PWR served on the steering committee of the measure. And urban planner Nithya Raman, former executive director of Time’s Up Entertainment — who was also endorsed by Sanders — is looking likely to oust incumbent David Ryu in a bid for a seat on the L.A. City Council in District 4. 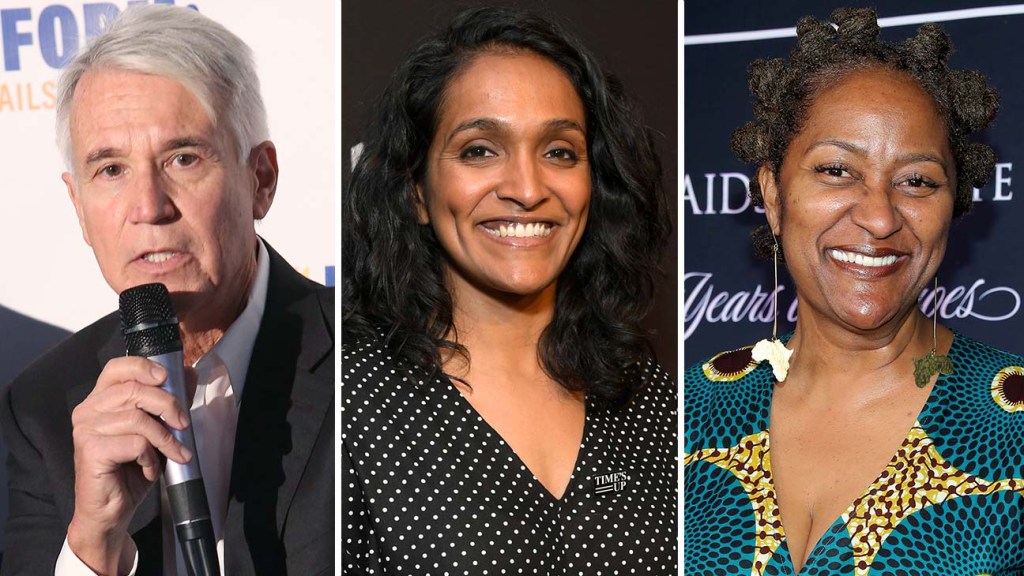 THR spoke with Sampson about these progressive wins, the organizing work that went into them and how he’s feeling amid the ongoing presidential vote counting.

Are you hopeful that George Gascón will be an improvement over Jackie Lacey as L.A. District Attorney?

So to be clear — from my end and my political ideologies — I believe that these systems are rooted in racism and anti-Blackness. They were rooted in slavery and slave catching. I don’t believe they should exist. The legal system here was built up around ensuring that rich white folks, rich white men, keep the land and resources that they stole from indigenous people and keep the Black folks that they stole and to build up systems of policing to control and continue to suppress any sort of rebellion or justice. That’s the way they operate. I am a proud abolitionist. And the work that we are doing is to eventually replace these systems completely with systems that are founded in care and accountability for our community.

So what kind of change could Gascón make within that system?

With this win, hopefully we see more accountability. The main thing was [Lacey’s] failing to hold killer cops accountable, and I am interested and hopeful that the new D.A. will reopen these cases, all of these cases. There’s been I believe 626 murders by police officers in Los Angeles County under the watch of Jackie Lacey and Eric Garcetti. [Note: Mayor Garcetti took office in 2013; Lacey in 2012]. Millions of dollars poured to Jackie Lacey from the sheriff’s associations, from the police associations to make sure that she wouldn’t pursue any accountability. Eventually, I would like to see the entire system replaced, but while they are here, we are demanding that the elected officials act right and if they don’t, they will see the same level of organizing or greater.

What kind of impact will Measure J have?

As we know, abolition is not just about tearing down but also about building up. Measure J will commit resources to our communities. It shows what people actually want in Los Angeles County. It secures 10 percent of the budget for community alternatives to incarceration including mental health, health care, housing and jobs. The Sheriff’s department and their association and police associations came out hard against it. I think there’s a growing realization of how oppression is baked into our budget and how we can shift that and how we can push for the things that we know the most vulnerable in our community need, those things that we know actually keep us safe.

Do you feel like there is a progressive wave in L.A. this year?

A lot of people like to demonize Texas for being so conservative, but almost every elected official in California takes a lot of money from police unions and refuses to hold them accountable. When I started this particular phase of my activism five years ago, I was shocked to find out that Texas had passed many reforms and changes to the legal system there that we still were fighting for in California. I want to put that as a framework for how hard it is to actually fight for change within the legal system here in California and how incredible and outstanding and unprecedented the organization was [this year] to achieve the things we have achieved — of defeating Prop. 25 [which would have replaced cash bail with an algorithm-based system of evaluating flight risk] and Prop. 20 [which would have increased penalties for certain property crimes including shoplifting] and passing Measure J and passing Prop. 17 [which will give people on parole the right to vote]. All of these organizers did incredible work, people like [BLM co-founder] Patrisse Cullors, [BLM-LA co-founder] Melina Abdullah, [La Defensa co-executive director] Eunisses Hernandez, [Reimagine LA co-chair] Isaac Bryan, [Initiate Justice co-founder] Richie Reseda.

There were so many people in Hollywood that got involved this year in these L.A. races and campaigns. Doom Patrol’s Diane Guerrero, Queen Sugar’s Dawn-Lyen Gardner, Jonn Legend and Rosario Dawson among others supporting Measure J.; Natalie Portman, Jane Fonda and so many creatives supporting Nithya Raman. Do you think it made a difference?

Absolutely — led by the grassroots folks in our community. Paying more attention to these local races is important because that’s where the change is happening, especially since at the federal level we have such an uphill battle. You have people actually paying attention to this stuff now, actually talking about budgets, which is the least sexy thing in politics. I think there’s a big shift. And I am very adamant that we maintain this level of engagement as our bare minimum, that we don’t take a break and take a rest. The same way we raised the floor to 10 percent for Measure J, we need to raise the floor for this level of engagement moving forward. 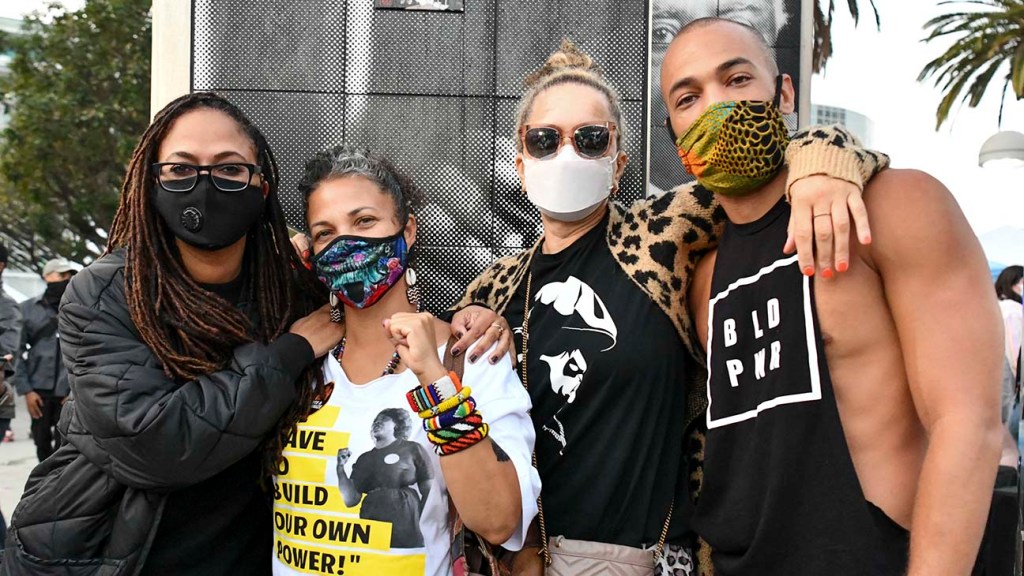 What was some of the work you did around the country on campaigns?

I have done my best. I flew out to Texas. We did a march to the polls. We knocked on doors in Texas at the beginning of this year and [BLD PWR was active] in North Carolina and Washington and South Carolina and Arizona and Colorado. I flew out for Cori Bush [the activist who won election this week to Missouri’s 1st Congressional District]. We’ve been all over the place registering voters and a part of so many campaigns.

What’s your mood like amid the ongoing presidential vote counting?

In terms of how I feel right now, all of these emotions, joy and trauma and depression and hope, determination and at the same time rage and anger — all of this is swirling round from millisecond to millisecond and they exist simultaneously. I feel the duality that I have felt all year, of being encouraged by the incredible organizing that’s going on all over the country and being in radical community and showing radical love to our communities, while also navigating trauma experienced this year on may levels. Experiencing deaths of close loved ones, of being out in these protests and getting beat up and shot at and shocked by police, of watching loved ones go through traumatic episodes with their finances, with their jobs; of loved ones getting sick and recovering or not recovering. All of that is wrapped up in four years of a white supremacist in office, a blatant white supremacist in office. I’m not saying he’s the first. The encouragement of anti-Black violence and anti-indigenous violence and violence against trans folks and the encouragement and glorification of police violence and then really the generational trauma of 400 years of the occupation of indigenous land and the continuation of slavery and slave catching under the guise of the 13th amendment and policing. All of that is what I’m feeling right now. And our work and our goals and our purpose and our vision goes far beyond what [happens at] the top of the ticket, when it is finally decided. As Dr. Melina Abdullah says, “Nobody ever voted our way to freedom.” It is a tool for liberation, but our purpose is much bigger than these systems and we will continue to fight no matter what. I keep saying whenever somebody asks me how I am, I say, “I’m 2020.” And regardless of what I’m feeling right now, we have work to do, no matter what happens with the presidential seat, because at the end of the day, the presidential seat was never intended to be the champion of our communities of Black folks and brown folks and the most vulnerable in our country. Our champion has always been us.