MSNBC is used to taking shots from Republicans and conservative media competitors. But, in the run-up to the 2020 presidential election, the network is facing consistent criticism from some of the people most likely to champion it: progressive Democrats.

“Some members of the public are under the mistaken impression that MSNBC is the progressive counter to Fox News, which couldn’t be further from the truth,” says Adam Green, co-founder of the Progressive Change Campaign Committee. “It’s not a progressive perspective. It’s an establishment perspective.”

Cenk Uygur, who spent six months as an MSNBC host in 2011 before founding the brand The Young Turks and recently embarking on a run to replace Rep. Katie Hill in Congress, has also emerged as a critic. “The problem is having everybody think you’re the progressive standard-bearer when you might be running the most anti-progressive programming on air,” he says.

Political consultant Rebecca Katz, who has advised New York progressive hopefuls like actress Cynthia Nixon and now-mayor Bill de Blasio, says MSNBC is among the cable news networks that “never treated Bernie as a frontrunner,” despite the senator’s success in raising money from a broad coalition of donors. She adds, “Bernie Sanders has raised the most money from the most people of anyone in this race. That he is an afterthought on cable news, after months and months of people saying Mayor Pete Buttigieg could win when he was 8 percent in the polls, is quite the juxtaposition.”

More recently, Democratic candidate Yang has taken shots at the network, accusing Comcast-owned MSNBC of shortchanging his campaign and blaming it for a series of on-air errors that have omitted his candidacy. He has refused to guest on MSNBC until he receives a public apology.

MSNBC personalities, most notably Morning Joe regular Donny Deutsch, also have been criticized for comments made about Sen. Elizabeth Warren’s candidacy. On Nov. 27, Deutsch said that Warren has a “likability issue,” a comment that MSNBC contributor Karine Jean-Pierre pushed back on as a “problematic” and gendered critique.

To be sure, MSNBC veterans — including six former on-air hosts, contributors and producers speaking with THR — don’t see a conspiracy against the more progressive candidates in the race, and the network has shown no interest in publicly feuding with them.

“We are proud to have a diverse range of voices from all political perspectives in our lineup, which includes smart opinion programming in primetime as well as breaking news coverage,” an MSNBC spokesperson says. “We’ve made a concerted effort to invite balanced and thoughtful discussions to provide clarity on the critical stories that are shaping the nation.”

A former Democratic contributor for MSNBC argues that the network has been very consistent in having a “pretty mainstream progressive view,” rather than “following the energy of their political base in the same way that Fox News does.”

Assessing the situation, the ex-contributor says the network’s progressive critics are probably “frustrated that the kind of energy that they’re feeling among their base and at the grassroots level and across the campaign trail … is not the same kind of energy they’re feeling at MSNBC. It’s not because MSNBC is treating them unfairly, it’s that they don’t understand what MSNBC is about.”

In an effort to defuse tension with the Yang campaign, the network has not discussed the feud publicly and recently attempted to smooth things over in a Nov. 23 conference call with his advisers. S.Y. Lee, a spokesman for the Yang campaign, rejects MSNBC’s contention that it apologized during the call but declines to speak further about the strained relationship.

Despite their concerns, even the network’s biggest critics have largely positive things to say about the primetime opinion lineup, most notably host Chris Hayes. And Rachel Maddow, of course, is MSNBC’s biggest star and ratings draw, holding her own against Fox News’ ratings king, Sean Hannity.

Viewers have been responding in big numbers throughout the Trump era, though viewership has dropped this year compared to 2018. In the third quarter of 2019, MSNBC bested CNN in total viewers for both total day (880,000) and primetime (1.53 million), though CNN won both categories in the 25-to-54 demo and Fox News was the overall winner. In November, MSNBC boasted four of the top 10 shows in cable news, with Maddow in third place (3,175,000 total viewers), Lawrence O’Donnell’s show in eighth place (2,266,000 total viewers), Nicole Wallace’s afternoon show in ninth place (1,994,000 total viewers) and Chris Hayes in tenth place (1,984,000 total viewers).

While the network’s ratings have slid, it is projected to generate more advertising revenue in 2019 ($614 million) than in 2018 ($578 million), according to Kagan, a media market research group within S&P Global Market Intelligence.

MSNBC also has faced public criticism about the diversity of its hosts. “It had a diverse lineup and they did away with that,” a former on-air host says. The lineup once included daily shows from Joy Reid and Al Sharpton, both African American, who now host only on weekends, along with the since-departed Tamron Hall, Touré, Ronan Farrow and Jose Diaz-Balart (now with NBC News). But, in recent years, the network has added Craig Melvin, Ali Velshi, Ayman Mohyeldin and Yasmin Vossoughian as diverse weekday hosts.

MSNBC chief Phil Griffin and NBC News chairman Andy Lack have taken flak for some of these departures and for hiring both “Never Trump” Republicans and pro-Trump conservatives like Hugh Hewitt, who was given a Saturday morning show that was canceled in June 2018 but is still a contributor for the network.

While that formula has largely been successful, a former manager at the company predicts that more changes will be made to the dayside lineup to make the transition from news programming to opinion commentary “cleaner.” For example, Wallace’s show, Deadline: White House, is a largely opinion show that is sandwiched between two shows hosted by journalists, Velshi at 3 p.m. and Meet the Press Daily (and weekly) host Chuck Todd at 5 p.m.

For MSNBC’s sake, progressive activists are urging the network to course-correct and tap into party energy on the left before it’s too late. Uygur notes, “If throughout this election cycle they never have progressives on, there’s no way to undo that damage.” 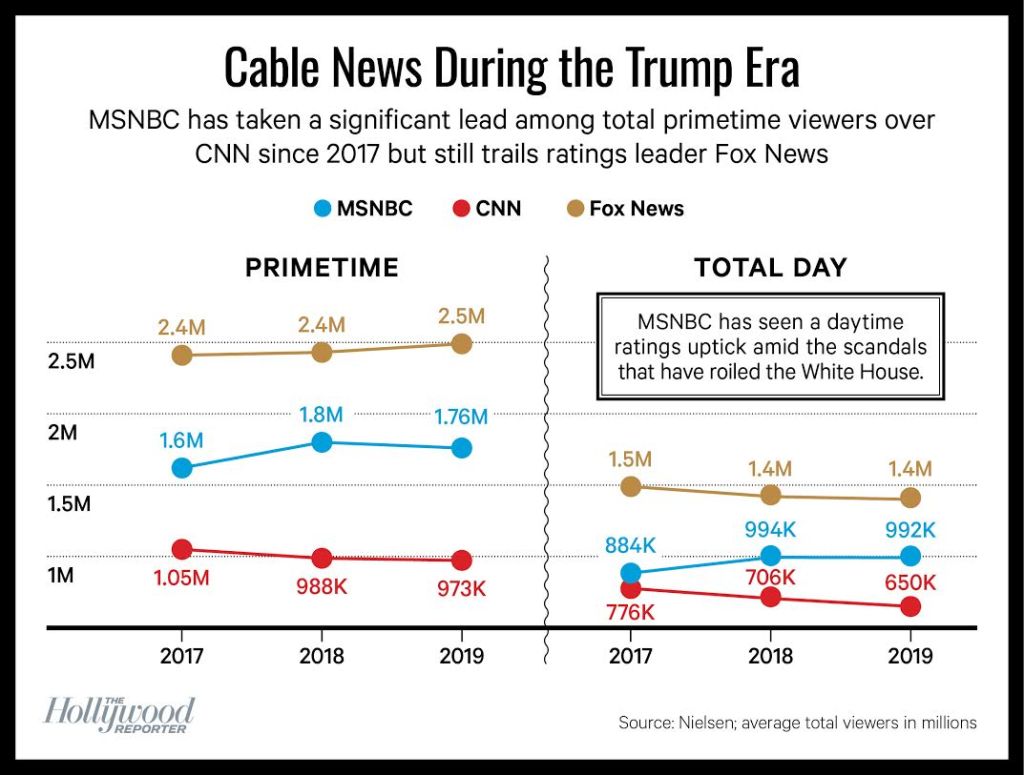