Behind an unmarked door in a building on the Sunset Strip in West Hollywood, actor Noah Centineo and entrepreneur Josh Heller, the co-founders of the nonprofit charitable organization Favored Nations, are giving a tour of their latest project.

Called Fuck This I’m Voting, it’s an art experience-meets-influencer house, all in the name of making voting feel less like a civic chore and more accessible and engaging, with some irreverent sloganeering — such as hats for sale that say “Give a Shit 2020” — along the way.

The pair, who started Favored Nations six months, show off a room where people can take photos in front of voting-themed set-ups that talk about issues such the environment and equality. There’s an interactive wall where visitors — the house is invite- and appointment-only — can write on a wall about what motivates them to vote. In another room is a light exhibit that Centineo calls Galaxy, that’s a small-scale version of LACMA’s Infinity Room, that’s meant to be a mind-expanding experience. And, finally, there’s a trippy, head-spinning room with two square keyboards, each with 16 buttons that activate flashing lights, and six flatscreens, which play clips of politicians speaking and a rotation of images. Centineo calls it the “immersion room.”

The entire installation — in partnership with Flight House, a TikTok content studio, and Castle, a yet-to-launch private members club — has also been turned into a virtual-reality experience, accessible at vr.fuckthisimvoting.org.

Centineo, 24, explains the aim of his nonprofit and its new project. “Favored Nations as a whole is focused on leveraging mass social media platforms to raise money for other charities,” says the actor, “but during this election we decided we wanted to focus on voting, especially with the younger generation, as there are literally millions of new voters in the last two years and they’ve never done it before. We wanted to kind of destigmatize the idea of voting. A lot of people are not voting out of protest because they think it doesn’t serve them, which is something I believed for a long time and now I don’t believe that. I think I have a little more information now.”

The number of people allowed in the installation at any one time is limited and masks must be worn inside. “It’s COVID compliant,” promises Centineo. “We clean after every group goes through.” The gallery is open through Oct. 29.

The Fuck This I’m Voting campaign is purposefully nonpartisan. “This whole campaign is focused a lot around those people who just feel like their vote doesn’t count. It’s not fuck the current administration. It’s not ‘fuck red’ or ‘fuck blue’. We’re motivating them to say, you know what ‘Fuck it. I’m voting for the environment or I’m going to vote for the candidate who focuses on mental health or equality,” says Heller, 33, the owner of Heller PR. Adds Centineo, “It’s about, ‘Fuck this. I’m involving myself. It’s that moment where we decide to take action.”

Part of Favored Nations’ fundraising approach has been to create a collection of branded goods with proceeds going to support a variety of causes, including COVID relief and the Florida Rights Restoration Project, which works to re-enfranchise formerly convicted citizens. For the launch of its voter initiative, Favored Nations has introduced a new capsule collection of T-shirts and hoodies that feature QR codes on the back of the apparel. The codes, says Heller, “take you to register to vote, show you how to vote and to different sections on our website.” Adds Centineo, “We’ve partnered with [voter-registration group] HeadCount. When you scan the QR code, it takes you so you can make a plan based by the state you are in and your zip code. You can see what propositions are up, you can understand what’s on the ballot.” Plus, one QR code is a playlist of music with selections crowd-sourced through the Favored Nations community of followers. 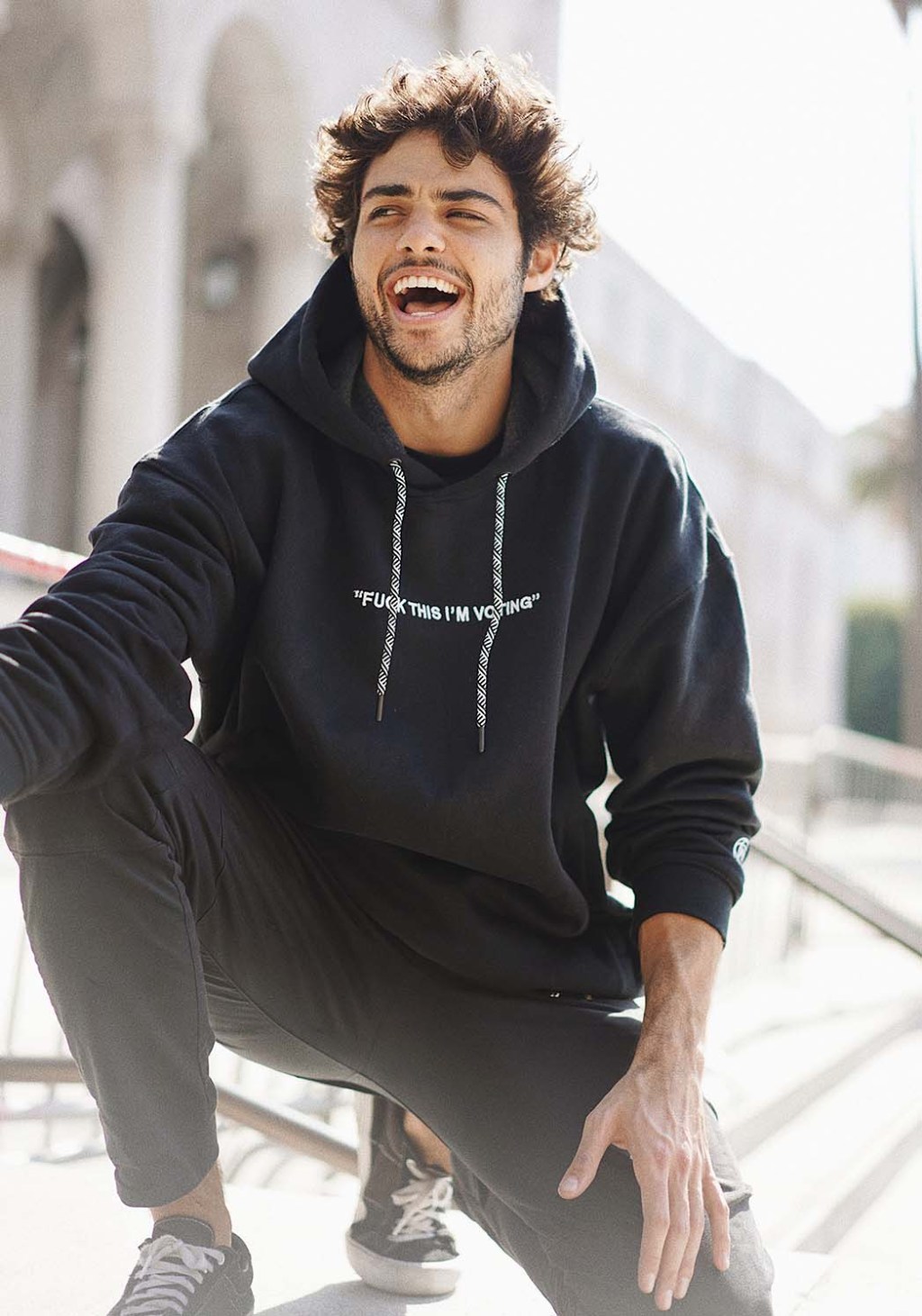 The voting campaign follows up on a presence Favored Nations had at the March on Washington on Aug. 28, where the group partnered with ethically produced, fair-trade chocolate brand Tony’s Chocolonely on its Tony’s Chocotruck, which worked to register voters at the event. Favored Nations has also partnered with the brand on a limited-edition run of chocolate bars — which sold out — that featured the message “Vote. Use Your Voice.”

In June, Centineo did a Favored Nations live virtual event with his fellow To All The Boys star Lana Condor, along with Black Lives Matter co-founder Patrisse Cullors, featuring table reads from the movie franchise that raised nearly $90,000 for such racial justice organizations as Black Lives Matter, Color of Change, The Bail Project, The Center for Policing Equity and Know Your Rights Camp.

And when Favored Nations launched in March, its initial run of apparel sold out in just three days, raising more than $40,000. No money raised by Favored Nations goes to its founders (business manager Paul Leighton is also a co-founder of the group) or executive team, whose work on the nonprofit is 100 percent donated.

Centineo has had extra time to work on Favored Nations due to the entertainment industry’s break in filming due to the COVID pandemic. While he did film an extra scene for the upcoming To All The Boys: Always and Forever, Lara Jean in Vancouver last summer, he won’t start his next film, DC’s Black Adam, in which he stars as Atom Smash opposite Dwayne Johnson, until next year. Says Centineo of getting the opportunity to focus on giving back this year, “Doing something purpose-driven has enriched my life in a way that I don’t think many vocations could.”