On Jan. 26, the day after documentary American Factory made its world premiere at Sundance, a small group converged at the quaint Washington School House Hotel in Park City, which Netflix takes over during the festival. Huddled by a fireplace were Higher Ground Productions co-head Priya Swaminathan and Submarine Entertainment’s Josh Braun, hammering out a $3 million deal with Participant Media, which financed the doc about a Chinese billionaire who opens a factory in an abandoned General Motors plant in Ohio, and Netflix business affairs executives. Everything related to the dealmaking was on lockdown, with factions within Submarine and Participant unaware of who exactly was interested. That would be Swaminathan’s bosses, Barack and Michelle Obama, who had seen the film remotely days before. That level of secrecy was maintained for more than three months, until the Obamas announced that the film was on their slate.

When Netflix streams it Aug. 21, American Factory — directed by Steven Bognar and Julia Reichert — will mark the Obamas’ first release, 15 months after they inked a splashy exclusive agreement to produce films and series with the streamer. In doing so, they became the first high-profile politicians to make a serious run at Hollywood post-office (Arnold Schwarzenegger and Ronald Reagan parlayed their movie star status into political offices, not vice versa). American Factory offers a window into the kinds of humanistic projects that are attracting the power couple as they settle into their new role as producers. 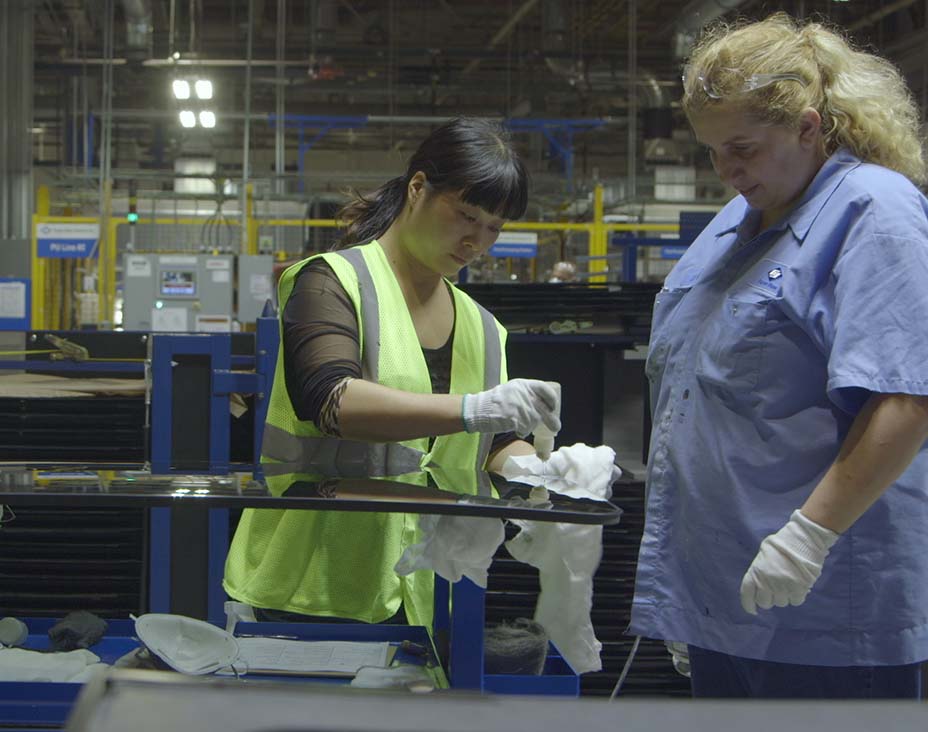 “Their team is smart, focused and know what they’re looking for. They honed in on certain films right away,” says Braun, the only agent who has sold two projects to the Obamas: American Factory and the doc Crip Camp, which follows a group of disabled teens at a New York camp in the late 1960s and will likely hit Netflix in 2020.

L.A.-based Higher Ground has filled out its staff of six, hiring Chernin Entertainment’s Tonia Davis, who will serve as co-head with Swaminathan (sources say the Obamas also pursued Amazon’s Julie Rapaport and Netflix’s Tendo Nagenda for top jobs). Other initial projects include a feature adaptation of David W. Blight’s best-selling Frederick Douglass: Prophet of Freedom; Bloom, an upstairs/downstairs post-World War II drama series written by Callie Khouri; the scripted anthology series Overlooked, based on the New York Times‘ ongoing obituary column; the kids nutrition series Listen to Your Vegetables & Eat Your Parents; and a docuseries based on Michael Lewis’ The Fifth Risk: Undoing Democracy, which takes aim at the Trump administration — perhaps the lineup’s only arguably partisan offering.

“Other production companies have to develop things and then hope it gets on air. The fact that they are working directly through Netflix means they have a guarantee that the content they are developing is going to be [available to 150 million people],” says UTA’s Darnell Strom, who met with Obama at the Brilliant Minds conference in Stockholm in June when the president addressed a no-press audience that included Netflix chief content officer Ted Sarandos.

Sources familiar with the Obamas’ deal say it stems from an already deep relationship with Sarandos, whose wife, Nicole Avant, served as the ambassador to the Bahamas during the Obama administration. In fact, Sarandos sits atop the list of advisers the president leans on most heavily for Hollywood advice. (A former Obama staffer says the president already had friendships with Tom Hanks, Kevin Costner and James Cameron and has since forged strong ties with J.J. Abrams’ wife, Katie McGrath, and Shonda Rhimes.)

The relationship with Sarandos cuts both ways, with the exec using Obama to entice reluctant talent. A source says that the TV-allergic Denzel Washington took a meeting with Sarandos in the fall, and Obama just happened to be in Sarandos’ offices, extolling the merits of the streamer. Still, Washington has rebuffed any offers to star in Netflix films, though he did move Ma Rainey’s Black Bottom, a project he is producing, from HBO to the streamer. (A source says the latter had nothing to do with Obama’s pitch.) When Netflix was battling Warner Bros. for the rights to the Will Smith starrer King Richard, about Richard Williams, father of Venus and Serena, Obama spearheaded the pitch. (Higher Ground would have produced, but Warners won out.)

Netflix staffers describe the surreal experience of an office visit from the president, who reportedly enters the building via an underground tunnel connected to the parking garage. Some have found themselves in a spontaneous conversation with Obama about a project, while others are delighted when he remembers their name from a previous meeting. According to agents, meetings with Obama proceed “surprisingly normally,” because he makes small talk.

The biggest question mark is how much time the Obamas will dedicate to Hollywood. “He’s engaged, spending a lot of time on this, but he’s in the middle of finishing his book,” says one source. Insiders expect the president to increase his level of attention in the coming year. Michelle has wrapped her Becoming book tour and is shifting her gaze to Higher Ground. She is particularly passionate about Listen to Your Vegetables because it dovetails with her work as first lady.

“They don’t only want to do politics or things that feel narrowly progressive,” says an agency source. “They were open. They weren’t coming in saying, ‘Where is our Game of Thrones?’ It was human scale-type stories. The main thrust was, ‘Don’t think of us as sanitized, like a project has to pass a political smell test. Think of us as a general entertainment company.’ “

Rebecca Keegan contributed to this report.

Hollywood Stars Who Are Helping Migrant Families at the U.S.-Mexico Border