President Donald Trump has left the White House, ending a four-year term that saw him impeached twice, left him banned from his preferred social network and scorned by Hollywood over his policies and temperament.

On Wednesday, shortly after 8 a.m., Trump boarded Marine One and flew to Joint Base Andrews where he gave a farewell address to supporters on the tarmac. Trump recited some of his favored accomplishments, including the establishment of Space Force, the passage of the Tax Cuts and Jobs Act and the appointment of more than 300 federal judges and 3 Supreme Court justices.

“I just want to say, you are amazing people, this is a great great country, it is my greatest honor and privilege to have been your president,” Trump told the crowd. “I will always fight for you, I will be watching, I will be listening and I will tell you that the future of this country has never been better, I wish the new administration great luck and great success, they have the foundation to do something very spectacular.”

Immediately after his speech ended, “YMCA” by the Village People blared over the loudspeakers, and Trump shook hands with attendees, and walked a red carpet up the steps of Air Force One, bound for his Mar-a-Lago club in Palm Beach, Florida, as Joe Biden is set to be inaugurated as the 46th president of the United States.

Although Trump declined to attend Biden’s inauguration, he did continue the tradition of leaving a note for his successor, with Biden later telling a gaggle of reporters that the letter was “private” but “generous.”

Trump, a real estate scion-turned-media personality, was a fixture of the New York and Hollywood social scene and a regular presence in news, film and TV for more than 30 years before being elected president in 2016.

The son of New York developer Fred Trump, Donald Trump became a regular boldface name in the city’s tabloids in the 1980s, leveraging those mentions into guest appearances (usually playing himself) in TV shows like The Jeffersons, The Fresh Prince of Bel Air and The Nanny, and movies like Home Alone 2: Lost In New York, Zoolander, The Little Rascals and the 1989 flop Ghosts Can’t Do It, which earned him a Razzie Award for worst supporting actor.

But it was a reality TV show, NBC’s The Apprentice, which rejuvenated the Trump brand after it debuted in 2004. Created with the mega-producer Mark Burnett, The Apprentice crafted a whole new image for Trump, ignoring his bankruptcies to present him as a savvy corporate icon, and associating the Trump name with charity and giving.

According to The New York Times, Trump earned hundreds of millions of dollars from the show, for which he served as the host and producer, and from endorsement deals that followed. The Hollywood Reporter’s Kim Masters reported that Trump leveraged his status at NBC to secure large donations to his charitable foundation, which he in turn used to bolster his own brand by donating that money to other causes.

That new Trump brand, of the charitable, successful businessman, was a key driver of his 2016 campaign, for which he ran as an outsider who could not be bought by special interests. Once elected, he combined traditional Republican priorities like tax cuts, deregulation and conservative judicial nominees with his divisive “America First” policies, which targeted immigrants and imports, antagonized allies and frustrated Democrats and Reagan Republicans.

Ultimately, Trump would be impeached twice, once for pressuring the president of Ukraine to announce an investigation into Biden (and withholding U.S. funds in the process), and again for inciting the insurrection at the Capitol on Jan. 6.

In office, he would use his Twitter account to vent about cable news segments, announce new policies or even fire cabinet members. Twitter banned him from the platform following the riot at the Capitol. He hired a number of veterans of conservative media to key roles in his administration, including former Fox News executive Bill Shine and former Fox & Friends co-anchor Heather Nauert, before turning on Fox News after the 2020 election, after it became the first TV network to call the state of Arizona for Biden.

Through it all, despite being anathema to the entertainment world’s elite, the Hollywood money never stopped flowing for Trump, even after he took office. Trump earned more than $1.7 million from his Hollywood work in 2019, according to financial disclosure forms, including pensions from SAG and AFTRA, more than $1.5 million from reruns of The Apprentice, and even a residual check for between $200-$1,000 from Universal for playing “Waldo’s Dad” in The Little Rascals. He only had one line in the film: “Waldo, you’re the best son money can buy.”

At the end of his tarmac speech, Trump suggested to the crowd and viewers at home that he had no plans to leave the public eye.

As Trump left, a number of Hollywood stars took to Twitter to celebrate his departure, with Cynthia Nixon, Tracee Ellis Ross, Amber Ruffin and George Takei among those expressing happiness to see Trump leave.

Others were more pointed in their messages for the outgoing president.

Mark Ruffalo wrote, “He is finally gone. The nightmare has come to its fitful end. A bunch of trump elite criminals pardoned in the shroud of night. The Golden Toilet Presidency is over. A turd is a turd no matter where it lays. We are going to be okay. From the wreckage there will be renewal, from the wounds will grow compassion and character, from the division will come clarity, from the despair will come wisdom, from the loss will come community.”

And Michael Moore added, “He has just left the White House for good. We the people have evicted him. I will go ahead cancel the U-Haul. He now flies over the wreckage he has created, knowing we are not done with him. Trial. Conviction. Imprisonment. He must pay for his actions – a first-ever for him.”

Judd Apatow said, referencing the coronavirus pandemic that has caused at least 400,000 deaths in the U.S., “No man has ever expressed less grief over the deaths of 400,000 people. They were just an obstacle to his thirst for power.”

Ava Du Vernay meanwhile tweeted the video of Trump and Melania leaving, writing simply, “Our votes did this.” And Jim Carrey marked the occasion with a Wizard of Oz-inspired painting. Stephen King, Dan Rather and Alex Gibney were among the media and Hollywood figures to celebrate as Trump exited the stage.

Trump’s Leaving, But Hollywood Must Confront Trumpism In Its Storytelling (Guest Column)

Hilary Lewis contributed to this report.

2:37 p.m. This story has been updated with Biden’s comments on Trump’s letter. 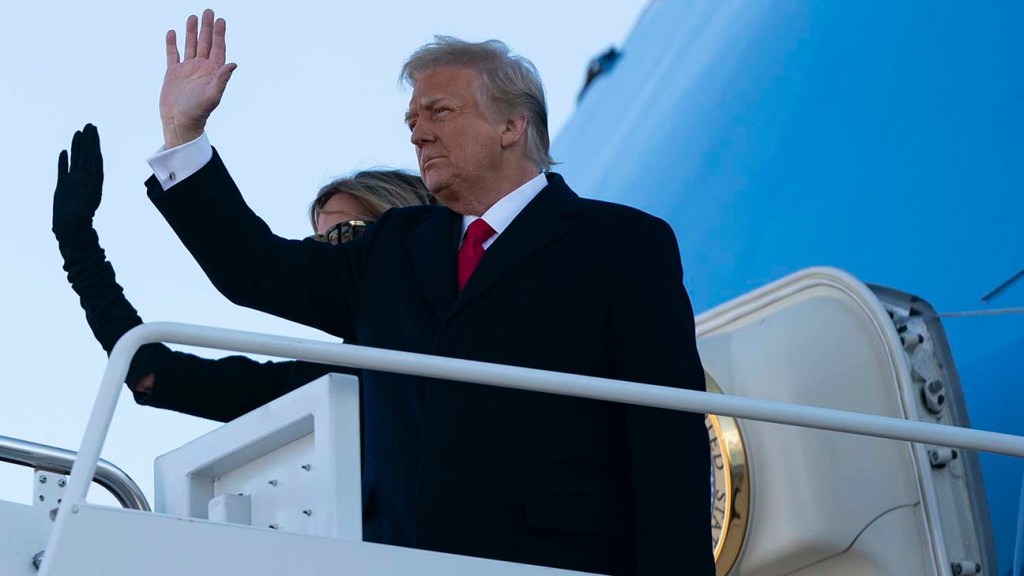