When President Donald Trump hosted Sarah Palin, Kid Rock and Ted Nugent at the White House on Wednesday night, the trio decided to seek out Hillary Clinton for a photo op.

After a private dinner and tour of Trump’s Oval Office, the former Alaskan governor and GOP vice presidential nominee, along with the two rockers, posed for pictures in front of the former first lady’s portrait, which hangs in the Cross Hall of the White House.

Palin, an outspoken Trump supporter, took to social media to thank the president for the invite and shared the photos. “A great night at the White House,” she wrote.

One of the takes shows the trio mocking the former Democratic presidential nominee. 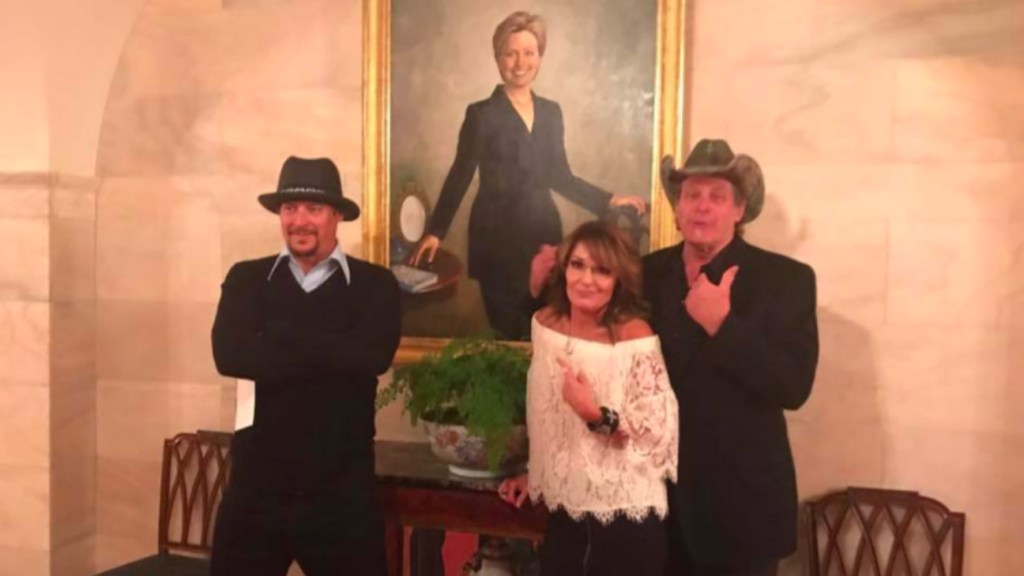 Palin said Trump reached out to her and asked her to bring some friends with her to the Washington, D.C. dinner, where the group discussed policy proposals that she says everyone present could relate to.

“I invited my buddies Kid Rock and Ted Nugent, some bold, courageous, all-American dudes who I knew would have good conversation with the president and get to express a lot of middle-class, worth ethic-type of issues and policy proposals that they could all relate to and that’s exactly what happened at the dinner,” she told CNN’s Jake Tapper on Thursday. Joking about her picks, she added, “Jesus was booked.”

Conservative activists Kid Rock and Nugent are both reportedly eyeing runs for the Senate in Michigan — a race that The Late Show‘s Stephen Colbert described as something that would “only happen in Trump’s America.”

The White House has yet to release any information on the visit, which spurred many “Caption This”-style tweets on social media.

See the posts from Trump’s guests below.

Not from The Onion. Trump’s guests at the White House last night: Ted Nugent, Kid Rock and Sarah Palin.

A great night at the White House. Thank you to President Trump for the invite!

Had and unbelievable and epic evening with Governor Sarah Palin and her team, and Kid Rock and fiancée Audrey, visiting…

So today is the 242nd anniversary of The Shot Heard Round The World is it! Well well well looky looky here boogie…