The work of a conservative street artist known for skewering the liberal politics of celebrities and corporations has been deemed “hate speech” by Facebook, which shut his page down on Sunday.

The notice comes just days after the artist known as Sabo attacked Facebook founder and CEO Mark Zuckerberg with posters disparaging his alleged presidential aspirations. “F*ck Zuck 2020,” read the posters, the symbol after the “F” being a middle finger. They were hung in the dead of night last week in various California cities. 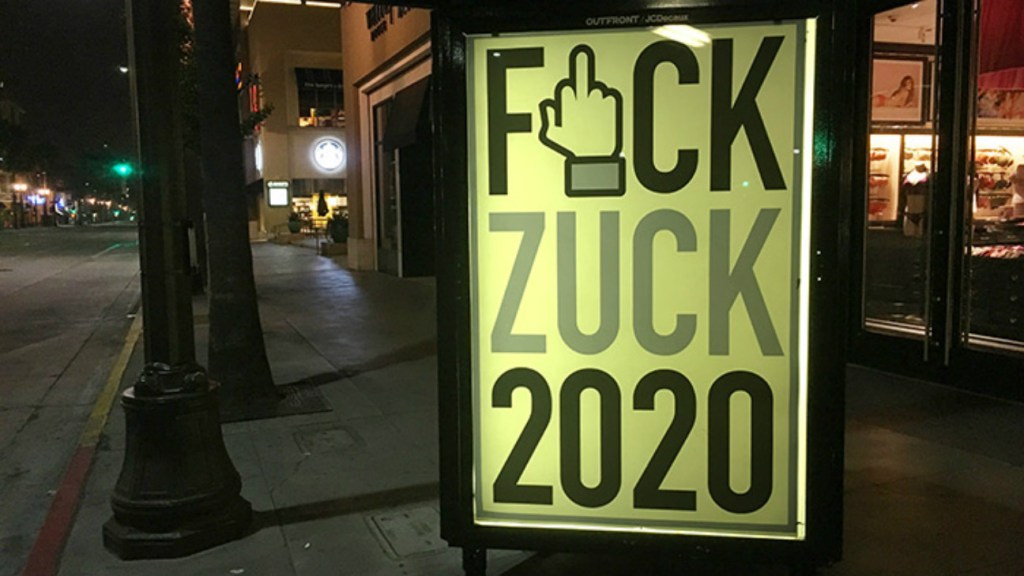 “Your page has been unpublished for using hate speech,” read the message at the Unsavory Agents fan page run by Sabo.

Sabo is the artist’s pen name and Unsavory Agents is the name of his website and business where his artwork is sold.

Sabo last struck on Friday when he plastered fake ads and posters around Google and YouTube offices in Venice, California. Those ads, some as large as 30 square feet and some plastered onto bus stop benches, ridiculed Google as a place that is hostile to free thinkers, a reference to the recent firing of an employee who penned a 3,000-word memo to co-workers critical of his employer’s focus on diversity in its hiring practices.

All of it is politically incorrect, Sabo freely acknowledges, but not “hate” worthy of censorship.

While Facebook wasn’t specific as to what it objected to, Sabo assumes it is retribution for his attack on Zuckerberg. Facebook may also have objected to recent posters featuring commentary on the Black Lives Matter political movement. Those faux ads, made to look like a genuine movie poster for War for the Planet of the Apes, feature the image of a well-armed ape on horseback with the text: “BLM: Kill Whitey.”

Then again, it could be a host of things that Facebook doesn’t like, considering Sabo has demeaned progressive sacred cows like climate change, affirmative action, transgender issues and much more.

But even though it’s not the first time Facebook has tried to correct his behavior, Sabo is convinced his banishment this time has something to do with the company’s leader.

“It took a week, but it finally came down,” Sabo tells The Hollywood Reporter. “Zuckerberg isn’t only a thief, he’s thin-skinned.”