Conducted by Whitman Insight Strategies and MRC Data in partnership with DISQO, the survey polled 1,103 likely voters (48 percent male; 52 percent female) across the United States from Oct. 8-13 to examine the intersections of entertainment, influence and politics ahead of the Nov. 3 election. MRC Data is a division of MRC, part owner of The Hollywood Reporter.

Celebrity influence has long been assessed to determine the impact stars have using their platforms to shed light on issues or persuade the public one way or another. The new study arrives at a divisive time in the United States both culturally and politically as elected leaders grapple with a viral pandemic and calls for racial and social justice against the backdrop of a heated election cycle. It also comes amid widespread if not unprecedented get-out-the-vote initiatives by celebrities. Whitman and MRC Data Researchers asked voters to specify whose opinion they trusted most, as well as name the issues they wanted celebrities to address, such as COVID-19, racial justice, healthcare, climate change, women’s rights, income equality and LGBTQ equality.

Overall, 12 percent of voters reported that an entertainer or athlete influenced their thinking regarding the election. Influence is higher among Black voters (28 percent), Hispanic/Latino voters (20 percent), LGBTQ (17 percent), Gen Z and Millennials (both 17 percent). Down the party line, Democratic voters are more likely to be influenced by athletes or entertainers than Republican voters at 17 percent to 9 percent. Among all voters, 36 percent said that James has done the most to raise awareness and motivate people regarding voting. Taylor Swift came in second with 13 percent, Johnson at 9 percent and Winfrey with six percent. Tying with five percent were Cardi B, Beyoncé and Colin Kaepernick. James (22 percent), Swift (18 percent), Beyoncé and Cardi B (8 percent) all swayed Gen Z voters but Kanye West entered the mix in the age group by taking 11 percent. Swift’s positive sway among voters comes during a year when the superstar singer-songwriter has been consistently using her massive platform (87.3M on Twitter) to speak out on political issues.

Asked to name the person whose opinion they trusted the most regarding political or social issues in America, Hanks came in first among total voters by tallying 49 percent. He was followed closely by Johnson with 45 percent, Winfrey with 38 percent and James with 32 percent. Broken down by Democratic voters, the results were similar with Winfrey (55 percent) followed by Hanks (53 percent), Johnson (47 percent) and James (44 percent).

Rocker Kid Rock, a vocal supporter of Trump who recently appeared as a special guest of the president at last week’s debate, ranked as the most influential voice for Republican voters by snagging 46 percent of the votes. He was followed by Ted Nugent (43 percent), Hanks (42 percent) and Johnson (41 percent).

James previously said engaging Black voters was his main goal heading into the election. In a New York Times piece, the Los Angeles Lakers superstar said he would be focused on the voting rights organization More Than a Vote to combat systemic racism at the polls. “We believe that Black people, our community, we’ve been pushed away from our civic duty. We’ve been fed misinformation for many years. And I’m in a position where I can educate people and, through More Than a Vote, educate people on who important this movement is, and how important their civic duty is.” 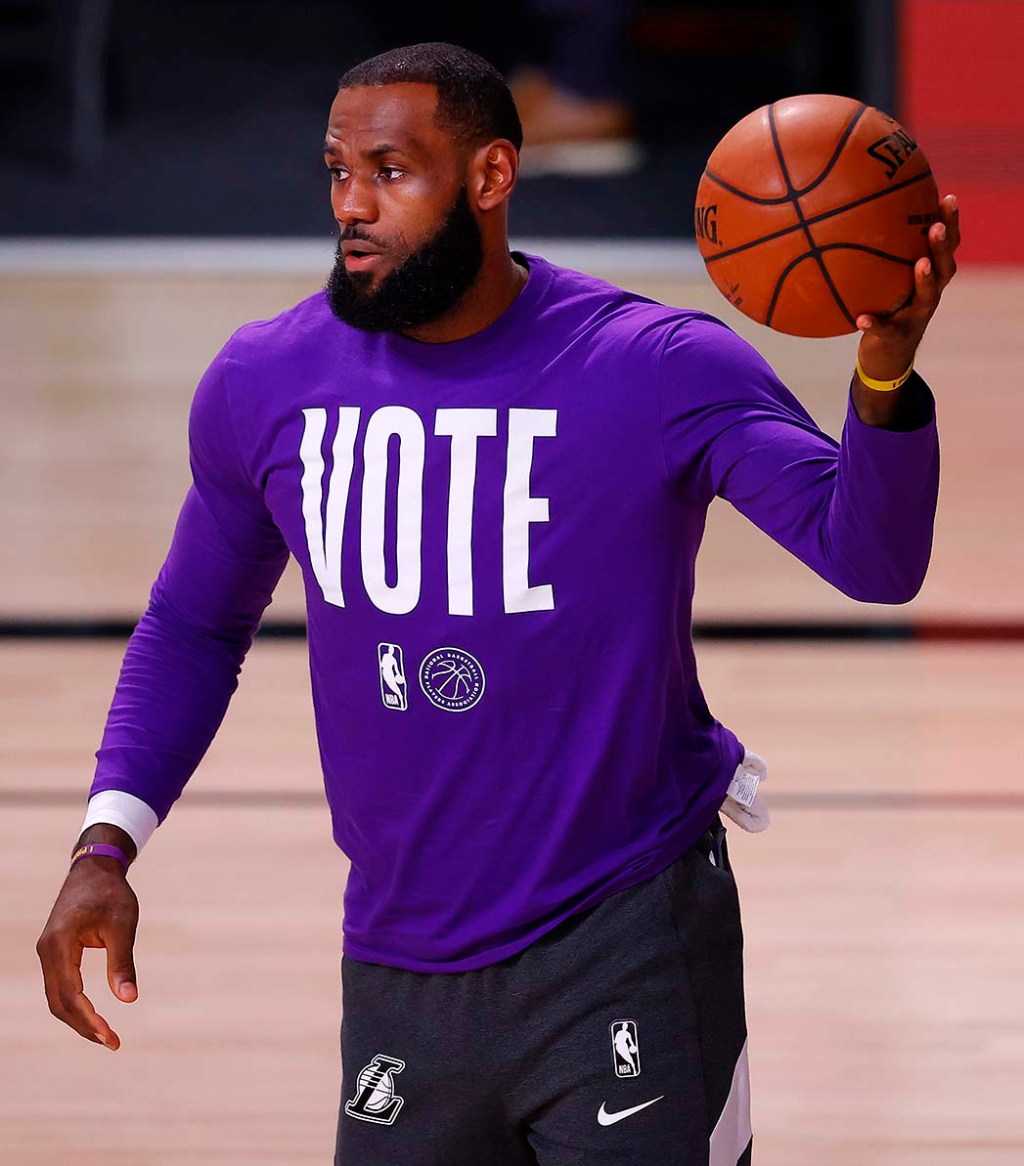 Johnson’s appearance as an influential voice is notable in that the WWE legend turned box-office superstar officially made his first public endorsement of a political candidate in September when he announced on social media that he was backing the Joe Biden, Kamala Harris ticket. He also shared the top spot in the favorability rankings in the Whitman Insight Strategies and MRC Data poll, with 74 percent of those surveyed listing him as favorable alongside Hanks, long called the nicest man in Hollywood. Rounding out the top 10 most favorable names: Reese Witherspoon, Alicia Keys, Leonardo DiCaprio, Neil Patrick Harris, John Legend, Dr. Anthony Fauci, Robert De Niro and Chris Evans. The bottom of the list, receiving a majority of unfavorable votes were Trump (57 percent), Kylie Jenner (49 percent), Kanye West (55 percent), Mitch McConnell (52 percent) and Kim Kardashian (56 percent).

Asked for whom they would vote for if the election were the day they completed the survey, 54 percent of respondents said they would cast for Joe Biden, while 42 percent of respondents said President Donald Trump. Only three percent were undecided. As early voting continues to hit record numbers across the country, the survey found that 59 percent of voters said they were more actively engaged this cycle than in 2016 with Democrats (63 percent), Republicans (56 percent), and Gen Z (70 percent) all reporting increased engagement.

One of the survey questions looked into the favorability of President Trump versus Dr. Anthony Fauci. The veteran immunologist, who has served as the director of the National Institute of Allergy and Infectious Diseases since 1984, is part of the White House coronavirus task force but has found his work and recommendations routinely criticized by the president. Per the findings, Fauci was deemed favorable by 62 percent of the respondents as compared to 42 percent for Trump. Also unpopular: Supreme Court nominee Amy Coney Barrett who was voted unfavorable by 39 percent of respondents, making her the most unpopular court nominee since Robert Bork in 1987. Bork was nominated to the post by then-President Ronald Reagan but a Democrat-controlled Senate rejected the bid.

In terms of issues, 75 percent of voters said they wanted to see entertainers use their platforms to address social and political issues, specifically addressing the COVID-19 pandemic, voting and racial justice in America. By party, however, those numbers change with 93 percent of Democrats saying they are open to it, as opposed to 54 percent of Republicans. The survey also polled voters on a buzzy Hollywood topic: Should stars use awards shows to deliver politically-themed acceptance speeches? Sixty-two percent of Democrats voted yes, compared to 29 percent of Republicans. Majorities of Gen Z, Millennials, Black/African Americans, Hispanic/Latinos, Asian Americans and LGBTQ voters agreed with every category turning in upwards of 60 percent of the votes.

The survey also showed that fans of specific artists approved issue-based speeches: Lizzo (74 percent), Cardi B (73 percent), Billie Eilish (70 percent), Beyoncé (67 percent), and Ariana Grande (63 percent), to name a few.  Leonardo DiCaprio’s early voting post on social media proved to be the most “energizing” for followers among election-related content, followed by Beyoncé, Johnson, Kerry Washington and James. Beyoncé’s Oct. 1 voting post on Instagram shared with her 155 million followers proved to be the most influential among Gen Z voters with 80 percent saying that it energized them to vote.

In another category, researchers asked voters to determine who had “done the right things” in response to such issues as election participation, COVID-19, racial justice and climate change. In each category, Biden came out on top followed closely by celebrities in each category except climate change which saw stars tie with Democrats. Trump and Republicans didn’t fare as well, coming in at eighth and ninth, respectively in election, COVID-19 and racial justice categories. Climate change saw slightly better results with Trump at No. 7 and Republicans at No. 8 out of 10.

Taking a look at news consumption, researchers asked voters to identify their favored news source. Democrats selected CNN which took 53 percent of the votes while Republican respondents selected Fox News with 55 percent of the votes. Gen Z overwhelmingly selected YouTube with 59 percent, followed by Google with 58 percent and Instagram with 54 percent. Millennial voters selected Google with 51 percent, Facebook at 49 percent and YouTube with 47 percent.