As part of a new political initiative by Meme2020 — a collective of social media content creators founded by Jerry Media CEO Mick Purzycki — the group has released an animated short film today in which President Donald Trump engages in a rap battle with the ghost of Ronald Reagan. The seven-minute piece, funded by LinkedIn co-founder Reid Hoffman, is the first of a half dozen rap cartoons — all poking fun at Trump — that will be rolled out over the course of the next few weeks, says Beau Lewis, the founder and CEO of Rhyme Combinator, which conceived and produced Reagan vs. Trump Debate.

Pitched it seems mostly to Republican audiences (and some independents), the first video delves into questions of political legacy and loyalty within the party, as debated by caricature versions of the current and former presidents, with animated cameos by Mitch McConnell, Susan Collins, Lindsay Graham, Rudy Giuliani and Mike Pence.

The videos are part of a larger Meme2020 campaign that began rolling out social media content this week with a focus on promoting vote-by-mail registration. (Trump has repeatedly criticized widespread voting by mail and made unfounded claims that it leads to voter fraud.) Meme2020, which is a separate entity than Jerry Media, initially gained attention when it formed earlier this year and debuted a meme campaign in February in support of Mike Bloomberg’s short-lived presidential campaign. Also involved in the effort is The Lincoln Project, a political action committee composed of Republicans who oppose Trump’s re-election, known for its widely shared videos pillorying the president.

Lewis says he hopes the video series will succeed in persuading 2016 Trump voters to drop their support for him this year — people, says Lewis, who would never be swayed by typical political advertising.

“It may sound kind of funny — and our projects are funny — but it’s also a serious strategy,” says Lewis. “Rap is in my opinion the most efficient medium for communicating dense information in a way that gets recalled by an audience. And, you know, it’s hard to find an American without a strong opinion on Trump. We did some tests with randomized control sample audiences that showed attack ads that have been the standard for TV — while effective at getting attention — elicit an immune response against the attack.”

“Basically people are like, ‘Wait a minute. I don’t believe that” immediately,” says Lewis. “And that can even reinforce their existing opinions. On the contrary, we found that humor can access [people] even more. These rap cartoons can lower the viewers’ immune response so they are open to receiving information. That’s a long-winded way of saying we took a surprisingly scientific approach to arrive at light-hearted content. It’s sort of like the South Park effect, if you think about how many serious issues that show has tackled with viewers.”

Lewis, who pitched Hoffman on financing the project, worked with the LinkedIn executive chairman on a 2019 short in which figures including Alexander Hamilton explain crypto-currency. The animation for the Trump/Reagan short was created by the studio Six Point Harness (known for its work on the Oscar nominated 2019 short Hair Love). Other creators involved with the video include Epic Rap Battles of History’s EpicLLOYD  (who voices Reagan); comedian and 2 Broke Girls actor Jonathan Kite (who voices Trump); battle rappers Frak and Illmac; and a mix of conservative and liberal writers and researchers. In previous elections, various other creators in Hollywood have created PSAs in support of candidates and causes, such as a star-studded PSA that Joss Whedon put together in 2016 to boost Hillary Clinton.

The rest of the lineup of films from the campaign — which range from one up to seven minutes in length — include “rap cartoons [which] explore scenes like what happened in Trump’s bunker, the worst location for a rally and what the news channels really want to say to each other,” says Lewis, who is also currently working on developing a hip-hop musical, called Co-Founders, about Silicon Valley.

“Really our goal,” continues Lewis, “is create rap cartoons to bring a diversity of people together, both liberal and conservative, for a common cause of voting — against Trump ­— including Gen Z and millennials who don’t yet have a long voting history and may believe their votes don’t matter.” In regard to his own political beliefs, Lewis describes himself as a “liberal entirely” though “not always a Democrat.”

“I’m not trying to hide. I voted against Donald Trump and I will vote against Donald Trump again. Anyone who has values of country over politics — and is against nepotism and sexism and racism and is for reason and equity — I am aligned with.” He says that he’s enjoyed connecting with the Republicans behind The Lincoln Project. “I have more in common with them than I thought. Working with them has given me hope in the possibility of our country coming together beyond what I thought was possible before this project. Our hope is that our rap cartoons and memes can cut through the noise and hold people’s attention to help them laugh their way through some serious issues on the way to the ballot box and we hope a new president.” 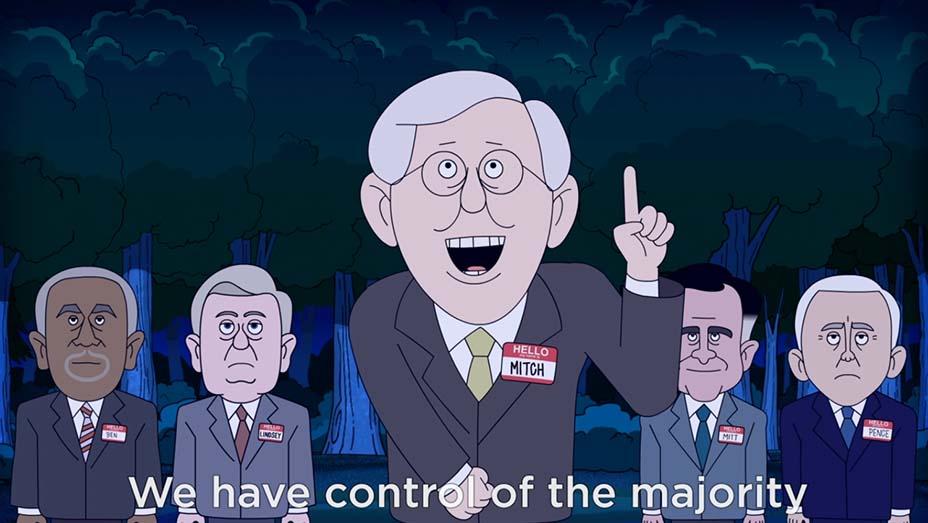