OGE has sent a tweet! That’s the Office of Government Ethics to the uninitiated, and its tweet links to President Donald Trump’s newly filed disclosure report. As before, his income includes a Screen Actors Guild pension, as well as other entertainment income, nestled among the larger hauls from real estate and golf ventures, among other things.

That SAG pension brought Trump $84,292, the document says. That’s presumably a 2016 figure, but the report doesn’t actually seem to indicate the period covered. A reference to July 2011 suggests that Trump has been receiving his pension since he turned 65. The last time The Hollywood Reporter looked, in 2015, the then-candidate reported $110,228 from his SAG pension.

Why and how the figure declined isn’t clear. The SAG Pension Plan did not immediately respond to an inquiry.

Pensions are generally not means-tested, and SAG pensions don’t preclude earning other income. Indeed, other entertainment ventures were more lucrative for Trump. According to the filing, Trump Productions yielded him $1,103,161, while a couple of his books — such as the Art of the Deal — each brought in between $100,000 to $1,000,000. 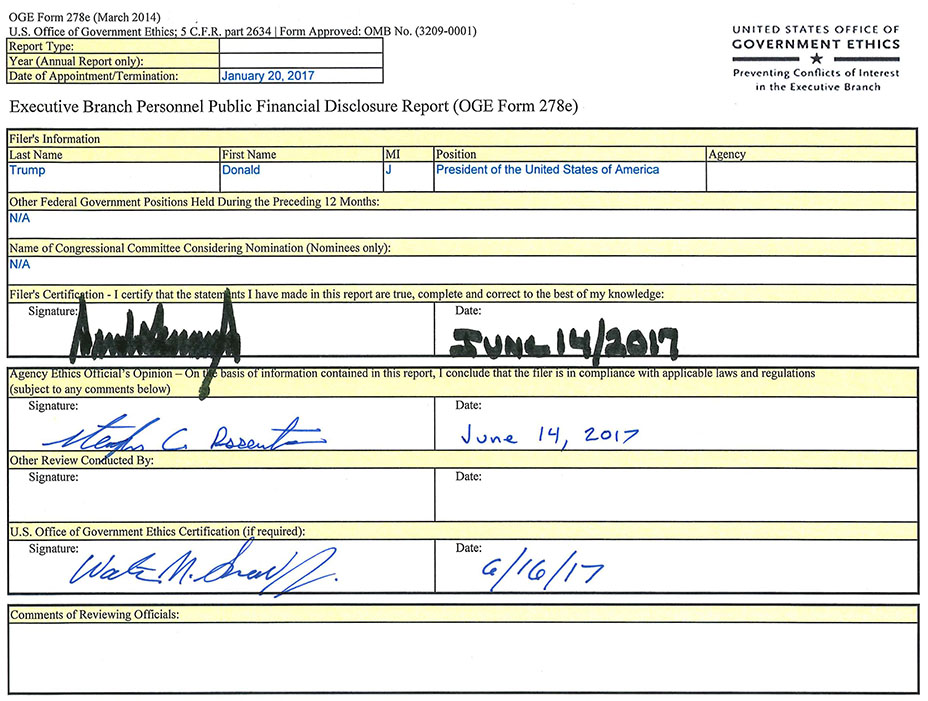 Still, even bigger money was to be found in Washington, D.C., and environs, where Trump booked $19,666,129 from his Trump International Hotel in the government-owned Old Post Office building and $17,508,270 from the Trump National Golf Club in suburban Virginia.

In Los Angeles, a companion Trump National Golf Club yielded Trump $14,982,417 in golf-related revenue and $12,035,000 from land sales. The remainder of the form reflects licensing, golf, real estate and other revenue from around the world.

Some of Trump’s revenue is the subject of pending lawsuits alleging violation of the Constitution’s Emoluments Clause, which says that “no Person holding any Office of Profit or Trust … shall, without the Consent of the Congress, accept of any present, Emolument, Office, or Title, of any kind whatever, from any King, Prince, or foreign State.” Trump has called at least one of the cases “totally without merit.”