On Thursday afternoon, legions of Donald Trump fans gathered on the National Mall for the “Make America Great Again! Welcome Celebration,” the pre-inaugural concert that had Hollywood talking more about who wasn’t going than who was.

An hour before the President-elect’s big kickoff concert, there’s a long line outside the Russell Senate Office Building waiting for inauguration tickets.

Most of the people in my immediate vicinity were Trump supporters waiting to get their tickets. The Iowa and Nebraska delegations were mentioned, and while they stood in line they talk amongst themselves about things like how they haven’t seen too many protesters so far. Which was true, at least in that heavily policed area, for that moment. One man shared glowingly with the group that a friend-of-a-friend just got a job as a speechwriter for Trump.

After credentialing, it’s off across the Mall, and the endless sea of guard rails and porta-potties, venders selling Trump merchandise and the President-elect’s supporters talking about whether they’ll make it in time for the start of the concert. Plenty made it; the public area I was in was packed.

“We left at 3:30 am this morning and we’re going to stay as long as it takes to go through all this stuff and be part of it and just soak all this experience in,” a New York-based Trump supporter wearing a “The Witch Is Dead” T-shirt explains, saying the performer he looked forward to seeing at the concert was “Donald Trump.”

Here’s an on-the-ground view of what was seen at among attendees at the Lincoln Memorial concert:

Around 3:50 p.m. ET: At the entrance I’m walking in, there’s a lone protester holding a “This Is F—ed Up” sign that nearly everyone has to pass since the gate entrance is relatively small. The protester’s name is Kieran, and he was quickly able to rattle off all the reasons why he made the sign: Trump’s planned mass deportations, a Muslim registry, climate-change denial, money in politics.

4:00 p.m.: At the Lincoln Memorial area close to the stage but still part of the public access (non-ticketed area), a lone man starts a “Who’s going to pay for the wall?” chant. Few other Trump-attired supporters took up the call and response.

4:20 p.m.: As attendees mill around and a marching band plays, talk in the group I’m standing in turns to that Trump singles website (slogan: “Make Dating Great Again”). “I mean, he won,” shrugged one man.

4:25 p.m.: Seems like more than a few people aren’t even aware of who is playing. “Toby Keith and I don’t know who else,” says a woman talking on her cell phone through the national anthem preamble.

4:27 p.m.: Mild applause for DJ Ravidrums. “Am I missing a lightshow?” asks an apparently unimpressed attendee. 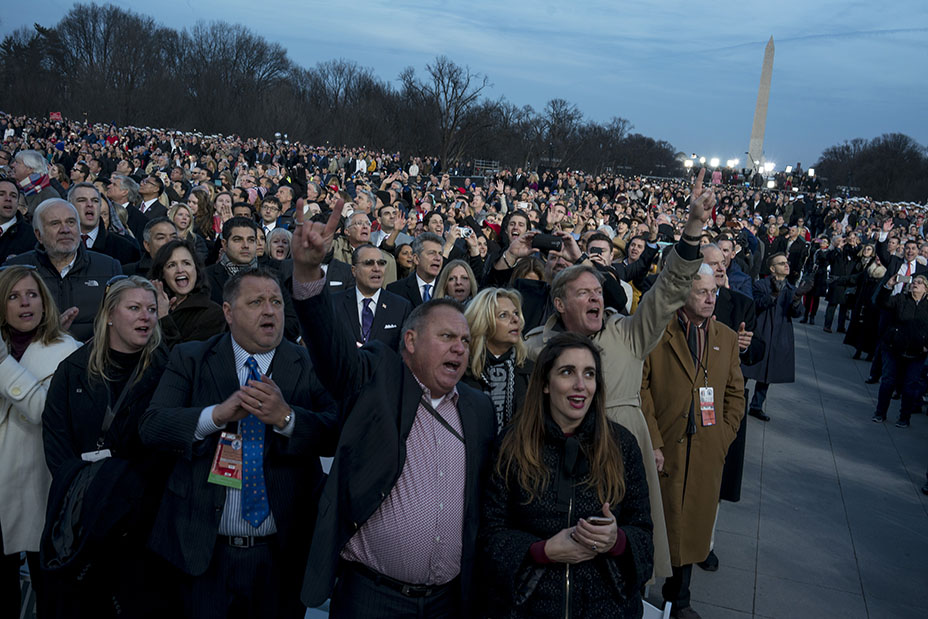 4:29 p.m.: Individual state names start whizzing by on the big screens at the side of the stage, a play to a crowd packed full of supporters coming from individual state delegations.

4:30 p.m.: One of the headliners, Jon Voight, gives his remarks, taking a cue from John McCain with his repeated “My friends…” refrain.

4:39 p.m.: Polite applause for the period costume drummers. Attendees in my area took this as an opportunity to mill around or check phones.

4:46 p.m.: Got cigarette smoke blown in my face, then realized that this is the first concert I’ve been to in a while where pungent wisps of marijuana clouds are not wafting through the air. (All the protesters were on K Street at 5 p.m.-ish I’ve been told, so that’s that.)

4:47 p.m.: “You Can’t Always Get What You Want” starts playing, Rolling Stones interlude continues. Man close by jumps in with a “… get what you need!” on cue. The song seems less fun now after the election than during the campaign. 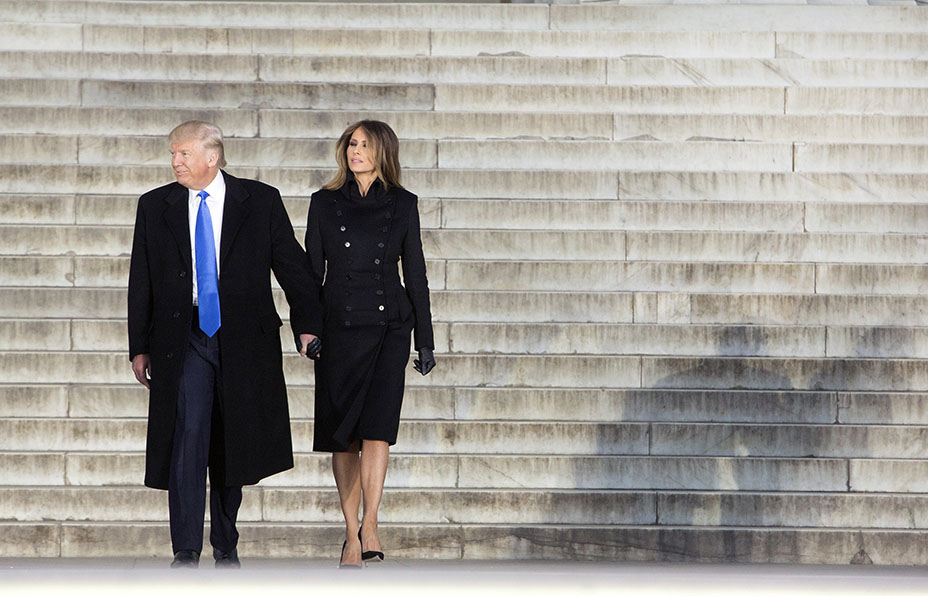 4:53 p.m.: President-elect Trump is announced, waking up the crowd. I hear “Let’s get it on, big daddy!” loudly from someone close by. The mogul and the incoming first lady walk down the steps of the Lincoln Memorial in respectful silence, then Trump chants start.

4:56 p.m.: It seemed like Trump was going to say something but — nope, there’s country artist Tim Rushlow on and there’s a “Texas!” shout.

4:59 p.m.: I’m realizing how small the narrative of “Hollywood boycotts the concert” really is. The performers are mostly background noise to the celebration that’s going on, and there’s no loud protesters that I see. The people are here for Trump, he really is the star.

5:01 p.m.: There’s a slight rush of people up a small embankment where I hear applauding. I ask an attendee what the extra applause is for. One guy tells me that it’s because “Blacks for Trump” supporters just passed by. He also says that there were transgender supporters of Trump heading the other way. I would never see either group the whole evening. 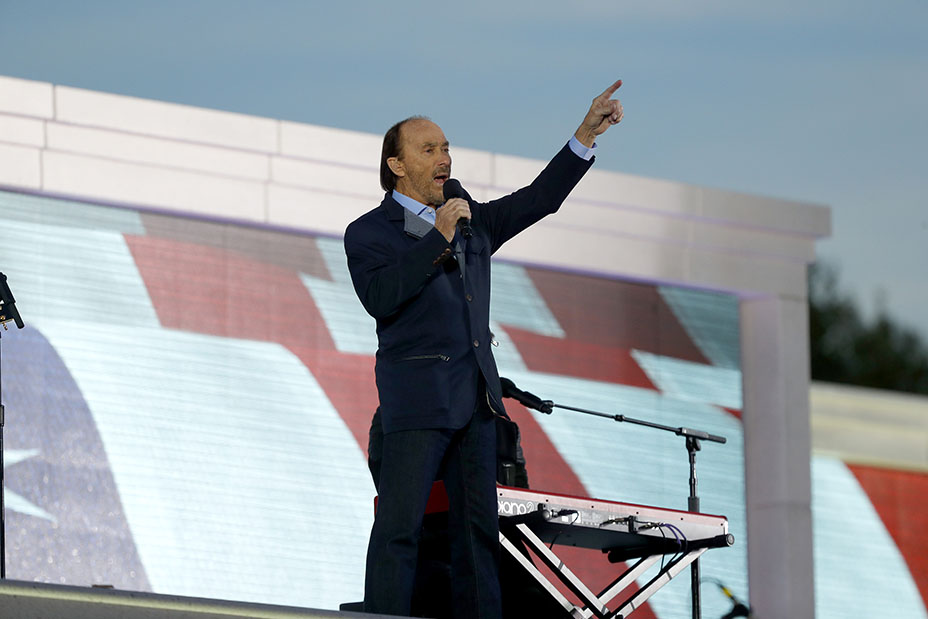 5:12 p.m. : 3 Doors Down is here. “Good for them for coming” and “Who cares?” are a smattering of responses. Getting the sense that “Kryptonite” would have to come on in order to rouse the crowd. Moments later, “When I’m Gone” starts playing and that does the trick.

5:20 p.m.: Yep, and there’s “Kryptonite.” The glare from the sun in my eyes is mostly gone, so I can see the statue of Abraham Lincoln brightly illuminated with shadow as the 3 Doors Down guitarist plays power chords onstage.

5:33 p.m.: DJ Ravidrums is back for another round, seems like he’s the filler set.

5:35 p.m.: Piano Guys introduced as the having one of the most viewed channels on YouTube. They have the most comforting track of the night, “It’s Gonna Be Okay.” Yep: “No matter what you’ve been through here you are/ No matter if you think you’re falling apart.”

5:45 p.m.: DJ Ravidrums is drumming again with what seems from far away to be a explosions-confetti-USA-backdrop.

5:48 p.m.: And here comes headliner Toby Keith. You know he’s the headliner because this is when the phones come out to start recording. “Freedom don’t come free,” y’all.

5:52 p.m.: A rare mention of President Barack Obama from Keith, thanking him for his service as a segue to talking about Trump’s big day tomorrow.

6:04 p.m.: After Keith, there’s “Trump, Trump” chants, but we get Trump Inaugural Committee chief Tom Barrack instead. He reminds everyone that this event was designed to be “of the people.” And maybe it’s just because I’m viewing it through my Hollywood lens, but it comes off as an oblique message about keeping the focus away from the stars that have vowed to boycott the President-elect. 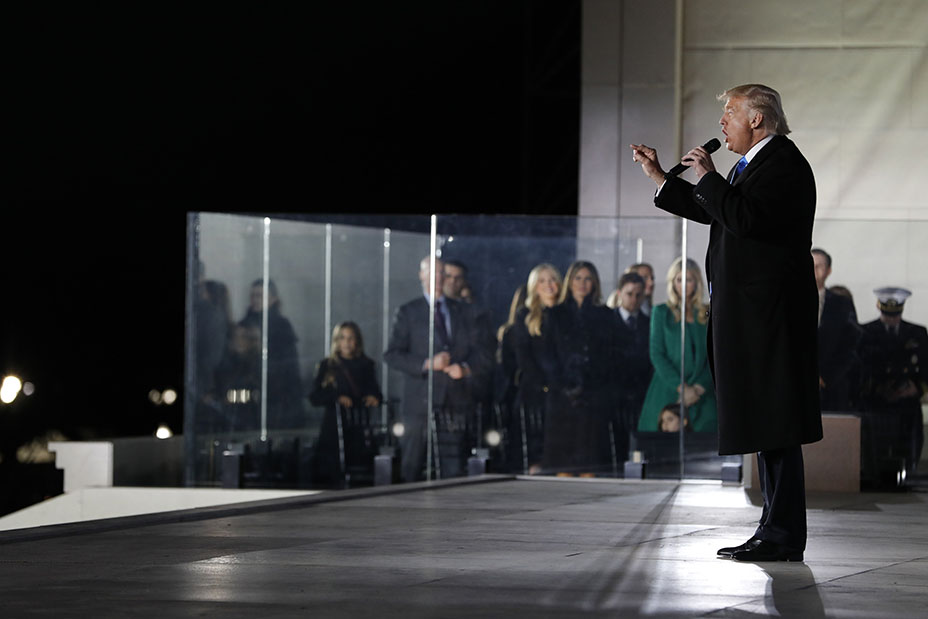 6:07 p.m.: Trump is speaking, puts on a low-key gracious hat, thanks performers and the military and calls himself the mere “messenger” for the movement (far from the “I alone can fix it” line from the Trump Republican National Convention last July).

6:10 p.m.: First outspoken protester I’ve heard, can’t hear what was said but the person was “booed” and whatever was happening seemed to go away.

6:13 p.m.: “Fake news!” yells a guy, around the time Trump was talking about the final months of his campaign and the challenges.

6:15 p.m.: Trump has a feeling it’s going to be “beautiful” weatherwise tomorrow. Fact check: As of this moment, The Weather Channel says there’s a 70 percent chance of rain in D.C. for the inauguration. 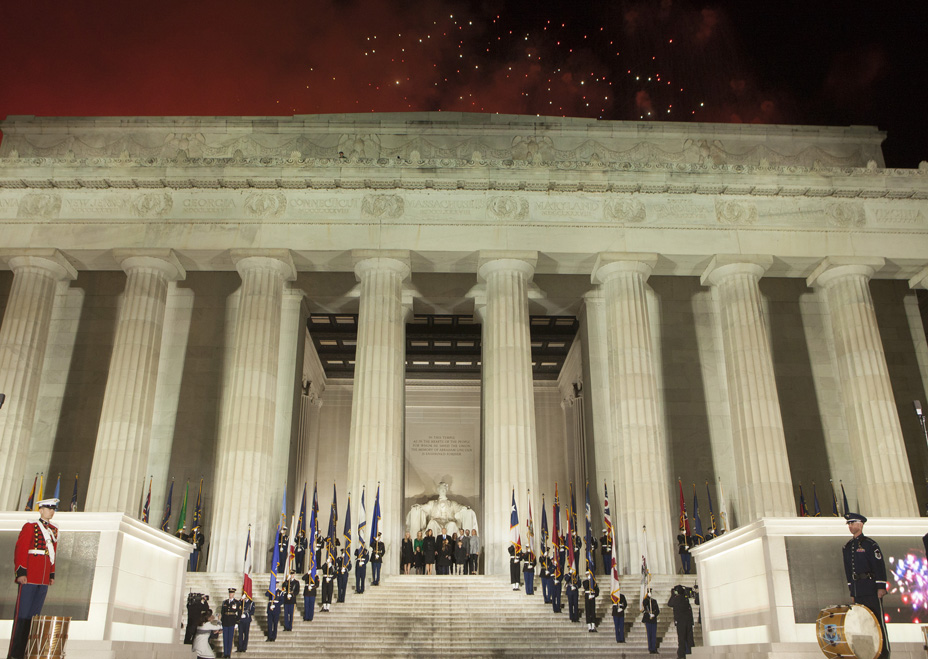 6:16 p.m.: Phones out, fireworks time set to the “Battle Hymn of the Republic” as they light up the faces of everyone in the red Trump hats. “Glory, Hallelujah!”

6:23 p.m.: Fireworks are over, and the masses slowly mill out as Journey’s “Don’t Stop Believin'” plays on the loudspeakers. Then a minute or two later, it’s “I Want It That Way” by Backstreet Boys.

6:25 p.m.: “Where are the protesters?” asks someone next to me as we keep filing out. It’s true, aside from the “This Is F—ed Up” sign guy who greeted everyone at the entrance, I saw no big anti-Trump signs. I guess that’s for Saturday. The real show is tomorrow.