Donald Trump continued his beef with CNN on Tuesday night, once again using the bully pulpit of his Twitter account.

The president slammed CNN for losing out in the inauguration day ratings, while also pointedly congratulating Fox News on coming first. Trump added that the “public is smart” for not watching CNN. According to a Pew Research Center survey, Fox News was overwhelmingly the “main source” of election news for Trump supporters leading up to the 2016 presidential election.

Hillary Clinton Explains Her Inauguration Day Attendance With One Tweet

The latest tweet continues Trump’s feud with CNN, which he continues to deride as “fake news” and also described during the election campaign as the “Clinton News Network.” In recent days, CNN, as well as a number of other news organizations, has earned the Trump’s increased enmity for repeatedly calling out the president and his team for lying about voter fraud and his inauguration crowd sizes.

And on Tuesday, the network fired back on Twitter with a statement of its own: “According to Nielsen cumulative numbers, 34 million people watched CNN’s inauguration day coverage on television,” CNN communications said in a tweeted statement. “34 million watched on Fox News. There were an additional 16.9 million live video starts on CNN Digital platforms.”

On a busy evening of tweeting, Trump also wrote that if Chicago didn’t sort out its violent crime rates he would “send in the Feds!.” He added that Wednesday would be a big day on national security, emphasizing that “among many other things, we will build that wall!” 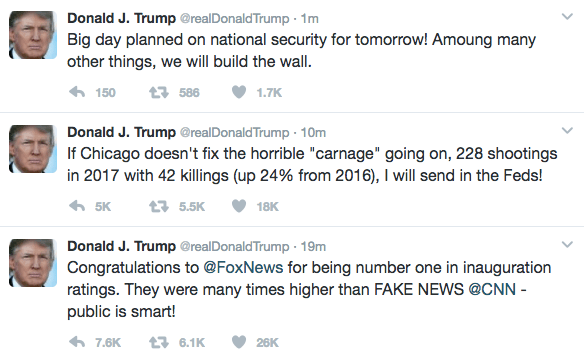