Despite the sunny swimsuit weather, older families in Palm Beach, Florida, long have turned up their noses at too much exposure, holding fast to the adage that one only should be in the papers at birth, marriage and death. “The Old World Palm Beach people wouldn’t dream of going to a restaurant — they entertain in their homes or clubs,” says Shannon Donnelly, a longtime society columnist for Palm Beach Daily News, aka “The Shiny Sheet” by locals. “If they go to a charity ball, they ask not to have their pictures taken.”

Then along came Donald Trump — and the conversion of his Palm Beach Mar-a-Lago estate into the winter White House. (His Trump National Golf Club in Bedminster, New Jersey, is predicted to become his summer “Camp David North.”) And though Palm Beach is a town he has sued repeatedly — $50 million during the early 1990s for blocking his plan to build mansion subdivisions on Mar-a-Lago, $25 million in 2006 for not allowing him to fly a mega-American flag, among others — suddenly he’s its biggest draw. “He has done more for the brand than Lilly Pulitzer,” says society chronicler R. Couri Hay. In the immediate aftermath of the election, the stores and restaurant owners on Worth Avenue, the major high-end shopping strip, were terrified of Trump’s new status. But now, it turns out, they are benefiting from his presence. “There was a 15 percent decline during his first visit [postelection] because people were confused and afraid of the traffic,” says Marianna Avvate, a spokeswoman for the Worth Avenue Association. “But we just had a board meeting, and it turns out there has actually been an uptick of 40 percent.”

A fixture since 1985, when he paid less than $8 million for Mar-a-Lago, the sprawling estate of cereal heiress Marjorie Merriweather Post, Trump ironically has something in common with the old guard: He rarely leaves his home and club. But even though he stays put, the election has elevated him from town curiosity to major force, and his visits affect everyone in the area. “When he first arrived in Palm Beach, people didn’t want him here because he was too flashy,” reports a local socialite. “Now that he’s president, people are more mixed. Some are proud to have him.” Adds Donnelly, “We haven’t had a winter White House since JFK.”

President Trump's Impact on His New York Neighborhood: "It's Bad for Business"

True, the change has wreaked some logistical havoc on the town. The first February weekend the president arrived involved the closing of coastal road A1A and the grounding of private planes and boats. And after he turned up three weekends in a row, “we were told the closures would be in effect every weekend until May, just in case Trump arrived,” reveals a local homeowner. When Air Force One arrives at Palm Beach International Airport, nobody is allowed to take off or land until Trump has been whisked away.

But the election also has resulted in some other unexpected victories for Trump. One of his famous lawsuits was in 1995 for $75 million to stop planes from flying continually over Mar-a-Lago. The noise was so profound that conversation was brought to a temporary halt during what locals called the “Palm Beach pause.” Now, finally, the election has achieved what legal hammering could not: Due to security concerns, planes no longer are allowed to fly over Mar-a-Lago when he is in residence.

Like most cities, Palm Beach has seen protests at every presidential visit, including a middle-school student hurling a slab of wood at his motorcade. Town officials hurled their own figurative stone in March, saying Trump’s frequent visits were costing Palm Beach about $60,000 per stay in overtime, largely due to security measures, and asked that the president or government foot the bill. Few, however, are complaining about the newfound financial upsides of hosting the most famous man on the planet.

Trump's Palm Beach: Where to Go, What to Do — An Insider's Guide

Though there was a sighting of Ivanka in March, the last actual glimpse of Trump himself on Worth Avenue was in December, as he stepped out of Tiffany, a store he is so obsessed with, he named a daughter after it. Still, some retailers are putting aside Palm Beach’s traditional haute vibe of glittering Kashmir sapphires and couture and seizing the moment. Bibi’s chic pet boutique added Trump chew toys, which already are on back order, and Sherry Frankel’s Melangerie is displaying cheese plates inscribed with “Make America Grate Again.” Says Frankel, “I just sold 50 of them.”

Local eateries are benefiting, too. Restaurant Costa (which offers a Trump chocolate tower cake) “initially lost business but is now up 200 percent,” says Avvate. Local institutions with A-list regulars — including Mediterranean hub Bice, where Howard Stern, Sarah Jessica Parker and Billy Joel have lunched, and The Cooper, a hot farm-to-table spot that brings in PGA professionals and top athletes such as Jack Nicklaus and Michael Jordan, are as packed as ever. 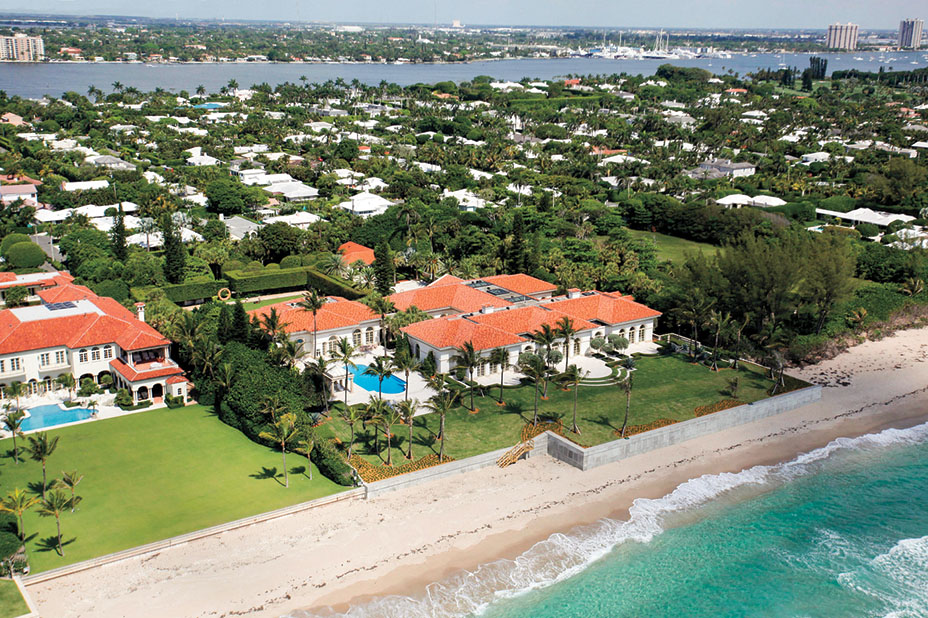 “There are a lot more tourists hoping to get a glimpse of the president or his family,” says Avvate. “Trump has been great for our brand awareness.”

This means the town’s iconic hotels stand to benefit, too, including The Breakers, where Sofia Vergara was married; The Colony, which served as the summer residence for the former Duke of Windsor and Wallis Simpson; and the Four Seasons, which hosted out-of-town guests for Blackstone Group CEO Stephen Schwarzman’s 70th birthday in March. Chinese President Xi Jinping stayed at the Eau Resort and Spa in Manalapan, just up the road from Mar-a-Lago, when he visited for meetings with Trump starting April 6.

The Trump bump also has been felt in the local real estate market. “Prices are going up, and suddenly the ads for mansions are saying, ‘with a view of Mar-a-Lago‘ or ‘near Mar-a-Lago,’ ” reports Angela Koch, an agent at Douglas Elliman (and ex-wife of oil billionaire Bill Koch, brother of GOP supporters Charles and David Koch). Rod Stewart and Stern are among Trump’s neighbors on Palm Beach Island, where in November, Russian billionaire Dmitry Rybolovlev sold for $34 million a parcel of the oceanfront property he purchased from Trump in 2008. Two in Trump’s political circle, Rudy Giuliani and Wilbur Ross, also own homes on the island.

HUD Secretary Ben Carson, meanwhile, has a house nearby in the ascendant enclave of West Palm, traditionally more affordable and diverse than the island, but also the home of the Trump Plaza condos (not to mention Trump nemesis Rosie O’Donnell). And in nearby Boca Raton, where Trump brought Japanese Prime Minister Shinzo Abe to the Morikami Museum and Japanese Gardens — and where Adam Sandler and Ariana Grande have residences — the market is so tight that there are virtually no oceanfront homes available, according to broker Rhonda Scott. 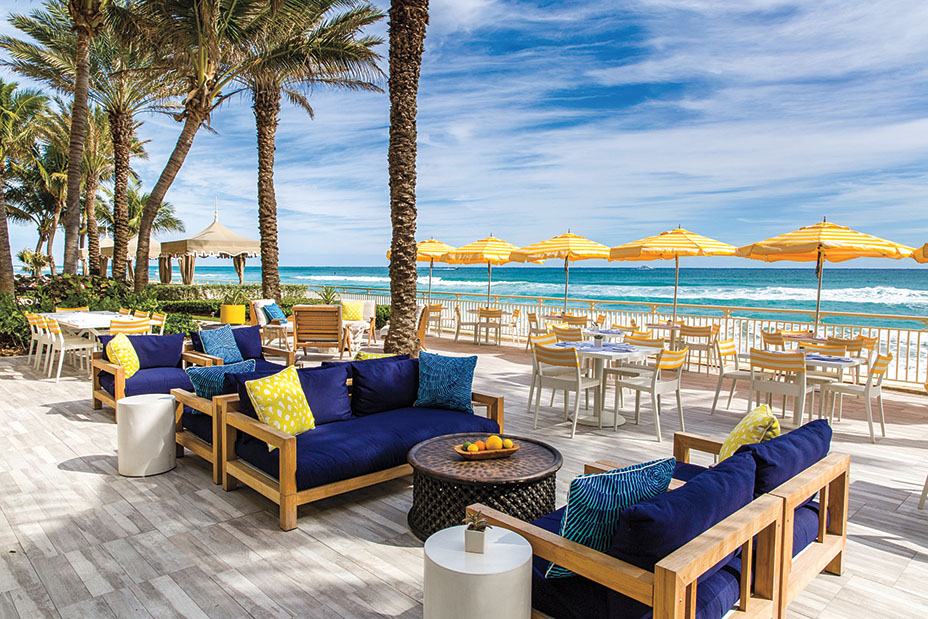 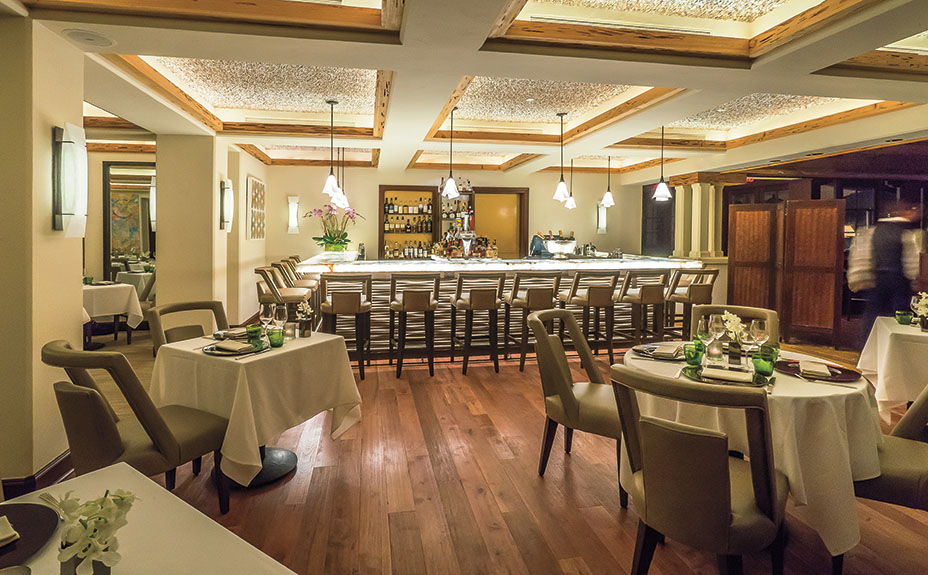 THE PERKS OF MEMBERSHIP

It was out of financial necessity that Trump opened his Mar-a-Lago estate as a club in 1995. In the years since, Michael Jackson and Lisa Marie Presley honeymooned there; Celine Dion and Joel performed; and Sean Combs and Jennifer Lopez reportedly had sex in front of the windows of the adjacent uber-exclusive Palm Beach Bath & Tennis Club. This past New Year’s Eve, Sylvester Stallone was at Mar-a-Lago’s party, and attendees freely posted selfies. “You had to go through checkpoints, and they opened the trunk and hood of your car, but once inside, Donald was very friendly, shaking hands and letting people take pictures,” says philanthropist Jean Shafiroff. Access to a president never has been easier, at least for the rich — on Jan. 1, Trump doubled the club’s initiation fee to $200,000. The situation prompted Democrats to introduce a bill in March called the Make Access Records Available to Lead American Government Openness Act, or the MAR-A-LAGO Act, which would require the disclosure of the names of people who visit “any location at which the president or the vice president regularly conducts official business.” 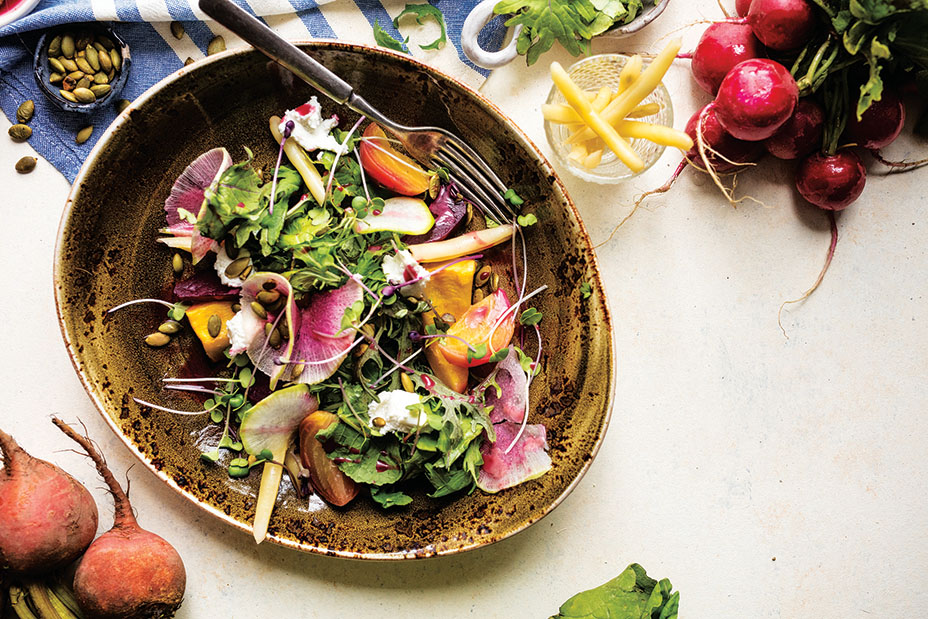 Trump famously denounced his Bath & Tennis Club neighbor for not allowing Jews or African-Americans to become members, and late-night reveling by high-profile guests (including Arnold Schwarzenegger before their Twitter feud over The Apprentice ratings) did not charm B&T club members. “Bath & Tennis doesn’t want anyone visiting you would turn your head to look at,” says Donnelly. Now that Trump is president, however, the front entrance to Mar-a-Lago is closed off for security when he is in town, so “members and guests are diverted to a parking lot across the street, which happens to belong to the B&T,” says author and social chronicler Michael Gross. “He is even unavoidable to the very people who thought they could keep him out.”