EGOT musician and activist John Legend is now officially a shoe designer. The Voice coach and his longtime stylist, Dave Thomas, have teamed with Sperry on a collection of men’s footwear, which landed Sept. 20 on sperry.com and at Nordstrom online and in select stores.

Legend and Thomas reimagined three of the heritage boating-shoe brand’s silhouettes, infusing the singer’s musical influence and personal style along with his penchant for comfort and luxe materials such as suede, leather and buttery-soft lambskin. The result: Sperry’s signature boat shoes in suede and available in baby blue, elephant gray, tan and salmon pink; 10-eyelet leather boots with a lug sole available in black and brown; and the seven-eyelet Commodore boot inspired by the brand’s best-selling chukka and available in white, brown and tan leather.

Priced from $120 to $250, the shoes feature Vibram soles and Sperry’s lightweight Plushwave midsole and outsole, as well as motifs from Legend’s musical career (think a keyboard print on the footbed of one pair, and the musician’s quotes on the tongue of another). The collection marks the continuation of Legend’s collaboration with Sperry, for which he previously curated a selection of styles.

“I always liked kind of a preppy style; when I was in high school that was a thing to do, wearing the Sperrys and the Eastlands and even though I wasn’t from any kind of preppy environment,” Ohio-bred Legend told The Hollywood Reporter yesterday during an appearance at Nordstrom at The Grove in Los Angeles, where he met with fans who pre-ordered shoes from the collection. “That was something that we would wear and it was kind of aspirational. I think that’s Sperry’s always been that kind of brand, a leisure brand, an aspirational brand. I wanted to honor that tradition, but also introduce some new ideas.”

As for the design process, the 42-year-old star explains that he and Thomas began with “understanding [Sperry’s] heritage and all of the things they’ve made over the years, and trying to figure out how to overlay and intersect my sensibilities and my brand with theirs. And so that was the process. We just kind of said, ‘Here’s some things we love about Sperry, here’s how to bring it together with my sensibility and my style, here’s some things from my closet and things that I would wear.’ [The goal was] how do we bring that together into a collection that’s cohesive and who I am, and also respects and brings forward the tradition of Sperry?” 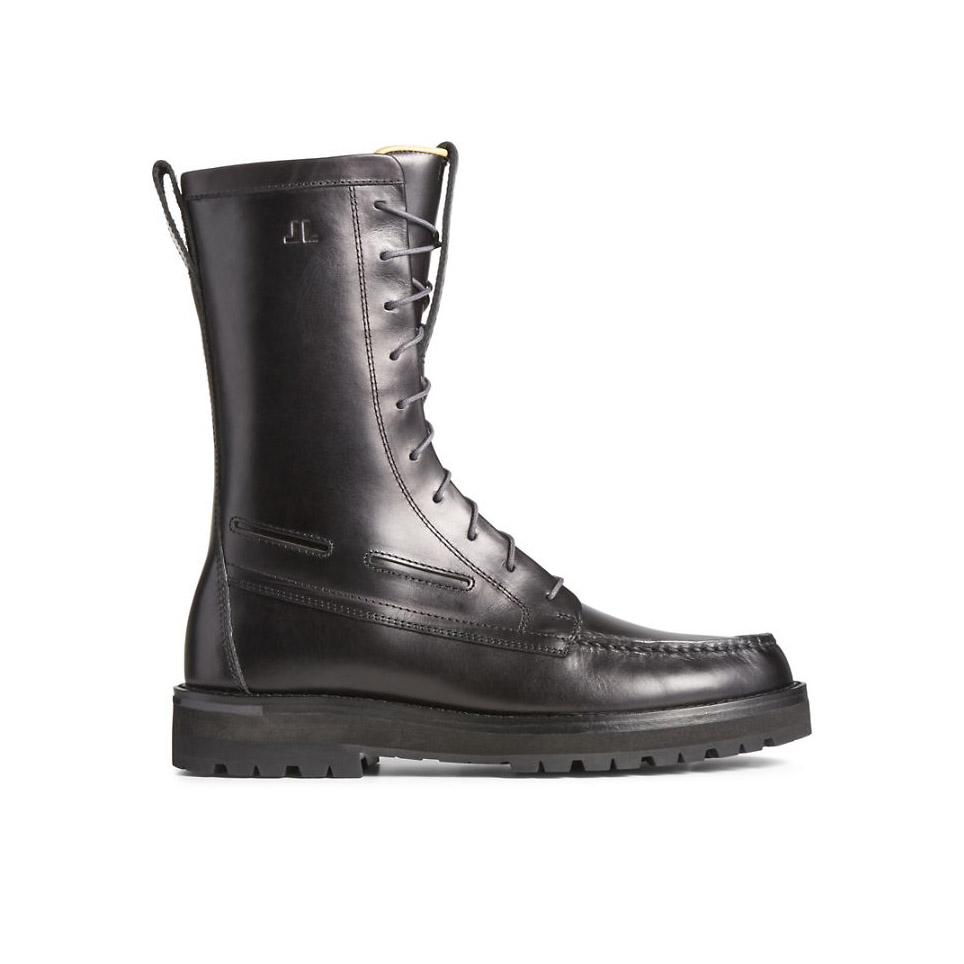 Among the fashion mashups that Legend and Thomas introduced to Sperry was the Authentic Original Vibrum Lug Boot, a “high boot that [Sperry has] never really done anything like before. It’s something I’ve been wearing from other brands over the years and we thought it would be cool. It felt urban, it felt really bold and different for Sperry, and a good fusion of my sensibility with theirs. You see some elements of the heritage of a loafer on it, but it still has that kind of higher bolder construction to it. That was kind of the process for everything; finding ways to introduce new elements, bring my sensibility together with theirs and create something fresh for them,” says Legend.

Ahead of his Nordstrom meet and greet, Legend sat down with THR to chat about the latest season of NBC’s The Voice (which premiered Sept. 20), his latest social justice initiatives and more. Shop the collection online at Sperry and Nordstrom, and read on below for more from the conversation.

The 21st season of The Voice premiers with your newest coaching colleague Ariana Grande, who you also sang with on Beauty and the Beast. What was it like working with her on the show?

It’s been me, Kelly [Clarkson] and Blake [Shelton]; we’ve been there for quite a while together and this is my sixth season with them. Blake’s been there since the beginning and then Ariana is brand new, and she’s been a fan of the show. I don’t know if we’ve ever had an artist that’s so high on the peak of her career and so relevant and so exciting for our show. She is one of the most talented artists in the world right now, and one of the most successful artists in the world. For her to be on our show is such a great thing for us.

We can’t wait to see the debut coach performance with you, Ariana, Blake and Kelly to open the season, too.

We did a mashup of [the 1966 Sam & Dave hit] “Hold On, I’m Coming,” and [Aretha Franklin’s] “Respect,” that’s going to be so much fun. All three of them are just incredible talents in their own rights. They kind of come from different places in the music galaxy. But everybody is so good at what they do and for us to be able to sing together, it’s one of the perks of the job.

It’s nice to finally get out of the house right? I know we’re still in the pandemic, but how did your own style change during the lockdowns?

I was on so many Zooms! Some people were like, “You know, you gotta do a Zoom background,” but for me, I was like, “My shirt is gonna be my thing.” So I got a lot of print shirts during the pandemic. I think I was embracing more of these types of shirts with the camp collar. I hadn’t done a lot of that prior to the pandemic.

It’s a great change from all of the sweat pants, and we love how you paired the salmon shoes with your pink suit, too.

Thank you! And yeah, everyone’s excited to get out of the house and go to things! 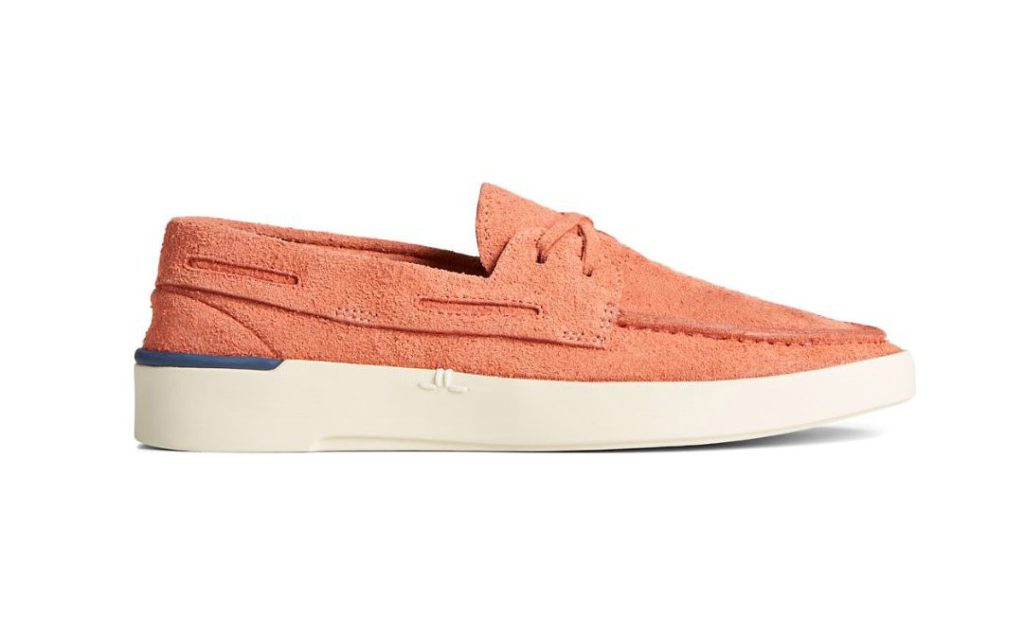 I know we’re here to talk about shoes, but your activism is, for lack of a better phrase, all of you. We’re guessing that it’s why Sperry also wanted to work with you.

Yeah, any brand that works with me, they know who I am, they know I’m going to tweet about closing Rikers as much as I’m going to tweet about shoes and music and all of the other things that I do. I think brands these days, I think there was a time when brands were a little bit more afraid to work with artists that had a voice about politics, about things that might be considered controversial.

But I think our audience and our fans want artists to be authentic, they want artists to tell the truth. Even within the shoes, the quote that we have inside the tongue of the shoe is about authenticity and being yourself. I think Sperry respects that about me and they know that I tell my truth, and I convey that to my fans. And I think it makes it more authentic when you connect with a brand because people understand that you are doing it from an authentic place.

One of the things you recently spoke about is voting rights, which is so top of mind right now given the efforts being made to pass the Freedom to Vote Act. What are your thoughts on why it’s important to support that?

I think it’s so fundamental to who we are as a nation. I feel like we’ll be stronger, we’ll be more free, we’ll be more just and more equitable as a nation if everybody has a voice in what’s going on. The more we can include people and the more we can give them a voice, give them the opportunity to vote and not put all of these artificial barriers in the way. We’ll be stronger. We’re better off when everybody is better off. That means a democracy that’s more inclusive and an economy that’s more inclusive. Voting won’t solve all of that, but voting is definitely a key part of that, having everyone’s voices heard. And making sure that the voter’s voice dominates over people with big money and all of these other things.

Speaking of which, what are some upcoming initiatives that you’re excited about?

We’re working in conjunction with a lot of organizations around the country. And then we announced yesterday the beginnings of a new organization, a new initiative called Human Level, which isn’t about voting, but it’s about making sure our local governments are more inclusive and more focused on equity so that all of the systems within the city are thinking about how we can include people, be more equitable, and make sure resources are divided in a way that’s really fair. And that we reverse some of the systemic racism that we’ve seen over the years.

So Human Level is working with this organization called Fuse Corps to put fellows in city governments all over the country focused on equity and so we announced that on MSNBC, and we’re going to roll out more content informing people about what we’re doing.

Back to fashion. How do you hope that others feel when they step into your shoes?

Well, the shoes are really comfortable, first of all! You feel like you’re wearing almost nothing. I think they make every outfit look a little better. And that’s what you want shoes to do, is to be that icing on the cake for your outfit and bring it all together and look good. That’s what I wanted these shoes to do, and I think they do it.