AMC Theaters Ticket-Takers Sue Over Being Forced to Stand

A proposed class-action suit claims the theater chain forces employees to remain on their feet for hours in violation of California's labor code.

On Seinfeld, George Costanza was concerned about the welfare of a retail security guard who has to stand all day. In a famous episode, George provides a chair, which prompts the guard to fall asleep on the job.

Now, attorney Kelly McInerney is stepping in where Costanza left off, filing a class-action lawsuit against the movie theater chain AMC for making its box-office cashiers and ticket takers "stand although the nature of their work could have readily allowed them to be seated."

McInerney is representing Andrew Allen and all other AMC employees similarly situated, claiming they are being forced to endure long hours on their feet when taking money and checking tickets. The proposed class action alleges a violation of California Labor Code Section 1198 and Wage Order 7-2001, Section 14, which says that "all working employees shall be provided with suitable seats when the nature of the work reasonably permits the use of seats."

AMC has responded in court to the allegations by, ahem, challenging the standing. Among its defenses is that the lawsuit is not suitable for a class action because the claims are "not typical" of the group of people the plaintiff purports to represent -- meaning, not every AMC employee is forced to stand.

The AMC employees are testing this argument. Recently, current and former employees of AMC received a notice about the proposed lawsuit in Alameda County Superior Court. 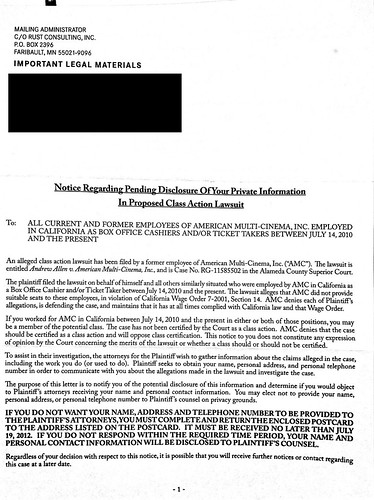 In addition to the standing issue, AMC has raised other defenses, including the assertion that the ticket-takers have waived the right to make the claim, failed to mitigate the damage of being forced to stand and that the statute of limitations on this labor complaint has passed.

This isn't the first time AMC has been locked in a strange class-action battle over the operations of its movie theaters. A few months ago, a moviegoer sued over the high cost of popcorn and soft drinks.

If AMC becomes legally forced to offer ticket-takers seating, is there any danger they'll fall asleep on the job and moviegoers will sneak in without paying? Ask George Costanza.