A Live Nation subsidiary is on the prowl for violations of Charlie Sheen's publicity rights, including "Unfollow Charlie" t-shirts which supported the charity RAINN (Rape, Abuse and Incest National Network)

Now that Charlie Sheen is going on tour and selling merchandise bearing his famous slogans, his reps are clamping down on vendors selling goods that trade off the much-followed Sheen saga. FEA Merchandising, a subsidiary of Live Nation, has been busy in the past 48 hours, sending takedown notices and cease-and-desist letters in an attempt to own the exclusive market on Charlie Sheen merchandise. In the process, the company has stepped on the toes of a woman's rights group protesting the Sheen saga with a charitable endeavor.

As we reported yesterday, a number of companies and individuals have already beaten Sheen to the trademark office, registering such catch-phrases as "winning," "tiger blood," and "Adonis DNA." Without a firm trademark stake over these marks, FEA has been exploiting a different protection maneuver -- claiming that products that bear Sheen's words violate his publicity rights.

For example, Kate Durkin says she was horrified by the reception that Charlie Sheen has been receiving in the media and among people on Twitter. So she, along with several others, set up an organization called Unfollow Charlie, intending to sell the t-shirt design pictured below and donate the proceeds to the charity RAINN (Rape, Abuse and Incest National Network). 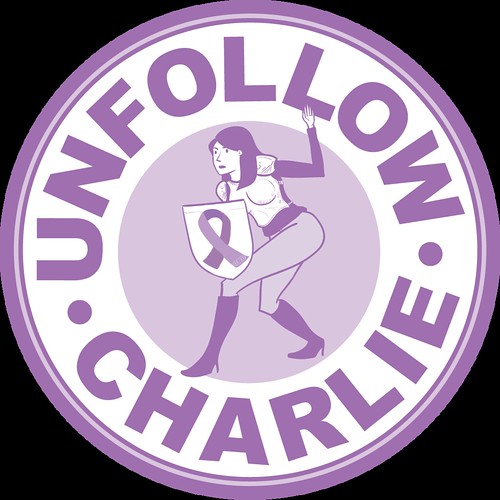 After setting up shop at Zazzle.com, an online retailer that allows users to upload images and create their own merchandise, Durkin was notified that the design would be taken down as the result of infringement. She got an e-mail that stated:

"Unfortunately, your product was removed because it featured a design that does not meet Zazzle Acceptable Content Guidelines. Specifically, your product contained content that violates Charlie Sheen's rights of celebrity/publicity. Charlie Sheen's name and likeness are protected by rights of celebrity/publicity and may not be used on Zazzle products without permission."

Durkin followed up, questioning whether her product was removed because her group was critical of Sheen's following.

FEA doesn't seem overly concerned with Sheen's image, however, as much as attempting to lock down the market. Another Zazzle retailer who was attempting to sell a t-shirt with "#winning" emblazoned on the front reports also being subject to a takedown notice over Sheen's publicity rights.

The use of publicity rights to protect slogans is extremely rare but not unprecedented. Nearly thirty years ago, for instance, Johnny Carson sued a toilet manufacturer who attempted to sell portable toilets bearing the phrase, "Here's Johnny," supposedly inspired by the late night talk show host's introduction each night on his program. Carson was successful in the lawsuit.

More recently, in a lawsuit that involved publicity rights in merchandise, FEA and Live Nation sued Rolling Stone magazine for slapping its famous cover images of musicians on t-shirts, tote bags and other items. The publication asserted in a summary judgment motion that it had a First Amendment right to the merchandise, which a judge declined to grant without seeing more evidence. Before the case got to trial, however, the dispute was settled.

The big issue in FEA's claims is whether it is overstepping its authority. Is a term like "Unfollow Charlie" evocative of Sheen's "personality" to the extent a judge would see it as unfair commercial exploitation of the actor? Does a charity organization attempting to express a viewpoint deserve free speech protections?

FEA hasn't responded yet to our inquiries.