On the verge of a trial, artist Jayme Gordon suddenly withdraws his claim that his work was stolen to make the 2008 blockbuster.

The studio was staring at a potential trial later this year over artist Jayme Gordon's claim that DWA stole his work to create Kung Fu Panda, which grossed $630 million worldwide at the box office in 2008 and spawned a sequel. Unlike many other copyright plaintiffs, Gordon had the rare fortune of surviving a summary judgment motion in April, setting up the potentially big showdown in a Massachusetts federal court.

But on Tuesday, Gordon suddenly backed off. He agreed to dismiss the case with prejudice -- meaning it can't be brought again -- and, according to court documents, he will get no settlement money. The dismissal papers also make clear he got no compensation of any kind.

In the lawsuit, Gordon said he developed the "Kung Fu Panda property" in the 1990s and his work featured "a Kung Fu fighting giant panda who likes to eat; his companion, a rare small red panda who also is a Kung Fu fighter; and a Kung Fu fighting super group known as the 'Five Fists of Fury' that consists of a tiger, crane, mantis, monkey and a venomless snake."

Perhaps most impressive was his 2000 copyright registration and the side-by-side comparison that was offered in his complaint. Here's a look:

Gordon maintained that his work was original. For example, in a deposition in May 2012, he was asked whether he ever took elements from other people's cartoons.

"No, I wouldn't say I took elements, no," he responded.

"So … your works are all original and aren't based on any preexisting cartoons by anybody else?" the defendants' lawyer asked.

Gordon responded: "I grew up drawing a lot of different cartoon characters, so how I interpret things or something down the line, but no, no directly -- I didn't directly take elements from something, no, not that I was ever aware of."

But lawyers for DreamWorks believe they discovered otherwise. The team from Loeb & Loeb was about to submit a motion to dismiss the case based on uncovered evidence of a 1996 Disney coloring book they believe was obviously traced by Gordon. And they had their own side-by-side presentation ready. Here's an example: 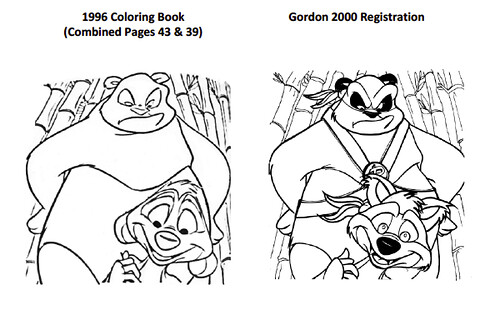 Before the motion to dismiss could be filed, Gordon agreed to drop the case.

We've reached out to Gordon's attorneys at Fish & Richardson for comment and will provide it if we get anything. It's also worth noting that in the April summary judgment ruling, there was some discussion about document shredding and computer file removals.