Just days after NBC Universal settled a lawsuit that claimed the studio had stolen the font on Harry Potter merchandise sold at Universal theme parks, another entertainment company is facing a font-face problem.

Turner Broadcasting is now being sued over the TNT series Falling Skies, a show about an alien invasion that is executive produced by Steven Spielberg. The plaintiff in the case is a German designer who is upset about the way the show has been marketed.

Matius Gerardo Grieck, founder of the +ISM studio, has brought his claims in a New York federal court, and is alleging that TBS and Titleboy Films have breached the licensing agreement on the company's Anthropolymorphics font software.

As discussed in our look at the Harry Potter font lawsuit, fonts can't be copyrighted, but software can be. Some plaintiffs have attempted to protect their designed fonts by enforcing restrictive licensing terms that govern the use of the font software.

Many of the cases filed on the font front have been settled at early stages before the plaintiffs needed to prove to a jury that the font wasn't traced and/or that the similar look was more than coincidental.

One thing that's not a coincidence is the lawyer who has been most pushing these types of claims.

Frank Martinez, an attorney based in Brooklyn, is now representing Grieck. He previously represented the design studio in the Harry Potter case. We've heard that some other big names in entertainment have also gotten cease-and-desist letters from Martinez on behalf of his clients on the issue of fonts.

What is the plaintiff claiming from makers of TNT's Falling Skies?

According to the complaint, Grieck demands at least $200,000 plus a permanent injunction. The plantiffs also want DVDs and anything that bears the result of unauthorized use of the copyrighted software to be turned over for destruction.

Here's an image from the court documents of work that was allegedly created by nefarious means: 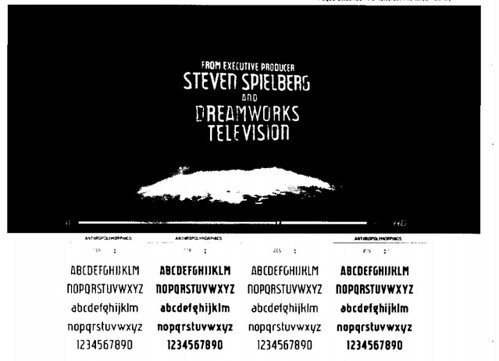