The message that piracy is wrong has never evolved. But from the use of color to subtle changes in language, the FBI's anti-piracy warning has taken on different looks over the last 30 years.

The Federal Bureau of Investigation and the major movie studios have introduced new anti-piracy warnings that will be featured on DVDs and Blu-rays. Here's a look at what home entertainment consumers have to look forward to and a look back through more than three decades of subtle changes to the way the industry and law enforcement have been trying to scare the crap out of would-be copyright pirates.

First, the new warning, which besides the FBI logo, also includes the insignia of ICE's Homeland Security Investigations, a unit responsible for investigating certain cybercrimes and empowered by the PRO-IP Act of 2008 to make coordinated efforts against piracy and counterfeiting. New expanded authority includes the ability to seize websites believed to be distributing copyrighted material, something that's triggered some controversy of late, but for most observers of this anti-piracy warning, it's the prospect of five years in prison that will be noticed, if at all. 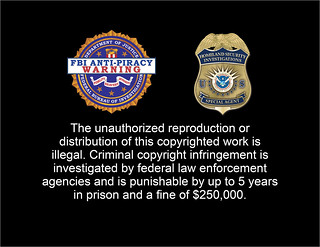 The above anti-piracy warning replaces another, presented on a gentle blue background, which has been used for about six years. Most notably, the new anti-piracy warning looks to be removing language about illegality of copyright infringment that's made "without monetary gain." 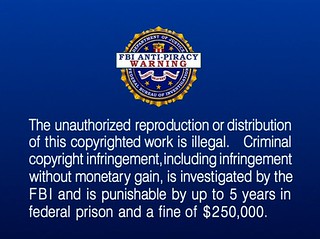 Language has always shifted through the years. Before the above anti-piracy warning, law enforcement was using the below warning. Note that for the last decade, consumers have been specifically told about "reproduction or distribution" of copyrighted works. From the best we've been able to gather, somewhere around the turn of the century, the explicit warning against "exhibition" too dropped off. Who writes the language and what's the process for settling it? From the best we've heard thus far, the decisions are made by the FBI's general counsel office with possible input from the Office of Management and Budget. 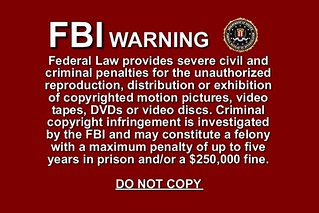 The use of colors is always changing. Above was the late-1990s scary red palette and below you'll see the mid-90s retina-hurting green palette for the anti-piracy warning. In addition, these days, anti-piracy warnings don't mention the type of media, but law enforcement and the industry used to explicitly warn against copying things like video cassettes and laserdiscs. With the increasing pace of technological shift, it makes more sense to err on the side of generic. 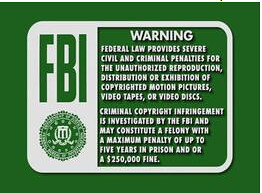 The earliest FBI anti-piracy warning we've been able to locate dates back to 1983. We're unsure how many people have actually been sentenced to five years in prison since that time nor how many people have been pursued by the FBI for copying the anti-piracy warning itself. It turns out that the FBI is protective of the seal, name, and initials on these anti-piracy warnings. On the FBI's website, the agency warns against unauthorized use and goes so far as to make a "word to the wise" that use of the logo for education on the "fair use doctrine" is not to be heeded. Last year, the FBI was said to be on the verge of being more permissive with its anti-piracy warning seal, but as far as we can tell, the agency hasn't officially permitted public use yet. We've reached out to the FBI for clarification, and if we hear more, we'll update. 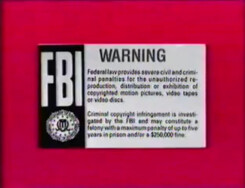 UPDATE: A spokesperson for the FBI tells us, "“The Motion Picture Association of America began using an FBI enforcement message on films while J. Edgar Hoover was director of the FBI. The current anti-piracy warning message, which has been used since 2004, was developed by the FBI and the Department of Justice, in consultation with representatives of the MPAA and the Recording Industry Association of America.”

The FBI doesn't exactly clarify what uses of the anti-piracy warnings are permitted except to reiterate, "Unauthorized use of the FBI’s name, initials, or official Seal is subject to prosecution under Federal Criminal law, including Sections 701, 709, and 712 of Title 18 of the United States Code."