The Trademark Office says consumers are likely to think the term refers to the famous singer.

Frank Sinatra doesn't have a cold. He has a wiener.

On Wednesday, the estate of Ol' Blue Eyes successfully prevailed against a man who named his hot dog truck business "Franks Anatra" and attempted to trademark it.

The United States Trademark Office's appeals board refused the application after Frank Sinatra LLC opposed it on grounds that it falsely suggested a connection with the dead singer.

Bill Loizon, the trademark applicant, argued that the Sinatra estate was wrong in its notion that there was a connection.

Why the hell would a hot dog company be concerned about ducks?

The Trademark Office doesn't know either, saying in its ruling, "There is nothing inherent in applicant’s mark or in his marketing to lead consumers to translate the word “Anatra” to duck. Furthermore, we do not understand how applicant’s mark engenders the commercial impression relating to anything other than a play on the Frank Sinatra name."

So the trademark applicant offered another reason. Anatra refers to the People's Republic of Anatra. which he says was an independent island nation that is "all about the hot dogs." Further, he says that his hot dog truck (pictured below) had a badge of the country on the door of his truck.

Hilariously, the Trademark Office didn't question whether such country exists. Instead, the office only says, "Suffice it to say, we find applicant’s explanation for choosing the mark FRANKS ANATRA to be obscure and find it unlikely that consumers will understand it."

Next, the question turned to whether Frank Sinatra, who died in 1998 at the age of 82, is actually sufficiently famous that consumers would presume a connection.

Loizon argued no, he's not.

"Frank Sinatra is an iconic American cultural figure whose fame and reputation easily satisfy this element of the test for a false suggestion of a connection," the appeals board confirms.

But does the Sinatra estate really intend to go into the catering industry? Well, it's possible.

The trademark appeals board continues, "It is commonplace for performers to expand their product lines to incorporate a diverse set of goods and services to capitalize on the renown of their names and brands."

So if anyone is getting rights over "Franks Anatra," it will be 'Ol Blue Eye, regardless of the fact that he hails from Hoboken, New Jersey, and not the People's Republic of Anatra. 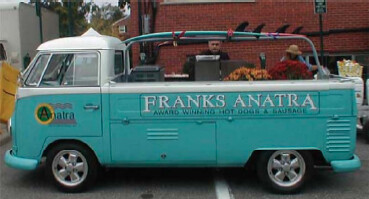