In the ongoing fight over whether YouTube owes Viacom billions of dollars for hosting copyrighted material, Google gets cute with a 1373-page filing.

Google is going for a second knockout punch against Viacom in an effort to dismiss a huge copyright lawsuit against YouTube.

Google subsidiary YouTube has maintained that the Digital Millennium Copyright Act affords it safe harbor because it has removed infringing material expeditiously. Viacom has disputed this, saying that YouTube has willfully blinded itself from rampant infringements on its networks, particularly in the early years of the popular video-sharing website.

The appellate court revived the case after focusing on the question of what standard of knowledge — general or actual — is needed before an ISP like YouTube is compelled to take action. The 2nd Circuit agreed with YouTube that an ISP must know about "specific instances of infringement" and implied that ISPs don't have to shoulder the burden of sweeping monitoring activities, but also was impressed with estimates that at one point, 75 percent to 80 percent of all YouTube videos contained copyrighted material. "These approximations suggest that the defendants were conscious that significant quantities of material on the YouTube website were infringing," the appeals court wrote.

The district court is now tasked with investigating this further.

On Friday, Google/YouTube filed a new summary judgment motion, but at the moment, it is under seal, likely to give the parties a chance to redact certain confidential information. The summary judgment motion contains the argument that Viacom cannot avoid having its lawsuit tossed without proffering evidence for each YouTube clip that shows that a YouTube employee actually viewed the clip, that a YouTube employee recognized the clip as copyrighted content belonging to Viacom, that the employee believed that the clip wasn't actually uploaded by Viacom, that the clip was not fair use or de minimus use, and that YouTube didn't then expeditiously remove the clip.

Hopefully, we'll provide that motion soon, but in the meantime, another document has been made public -- a 1373-page (!) supplemental submission in response to the court's request for an appendix of evidence of knowledge or awareness of specific infringing activity.

In response to questions of what precise information it had or was reasonably apparent in the identification of infringing material on the network, Google/YouTube has gotten cute, with hundreds upon hundreds of pages of URLs in one column and empty boxes in another column of Viacom's evidence, or lack thereof.

Google's point obviously is that it is a know-nothing party. The company says that it is Viacom's job to fill in the blanks "to survive YouTube's motion for summary judgment with regard to the knowledge element." Here's a peek at what this looks like. Viacom declined comment. 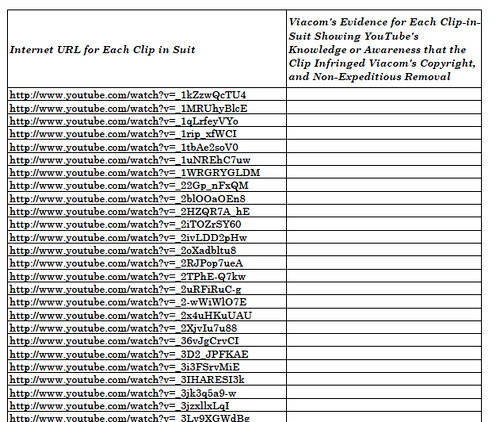