Last week, in the name of transparency, Google reported the takedown requests it was getting. Reaction from the entertainment industry is mixed, with some saying it's a positive step and others demanding more.

Google has released data showing the removal requests it gets from content holders wishing to delete links to infringing content. In a blog post, the web giant says that it has decided to expand its "Transparency Report" to include copyright so that people can understand how it blocks a free flow of information.

The continually updated data shows that NBCUniversal is by far the most aggressive media company when it comes to requesting that Google remove links. The Comcast-owned NBCU trails only Microsoft in targeting search engine links for alleged copyright abuse.

Since Google released the report last week, some entertainment entities have grumbled about it. Most notably, on the RIAA's blog on Wednesday, the trade association said that Google's report was misleading.

First, a look at what Google's data reveals so far. We'll highlight some of the big entities in entertainment and put it bubble form to get a sense of comparison... 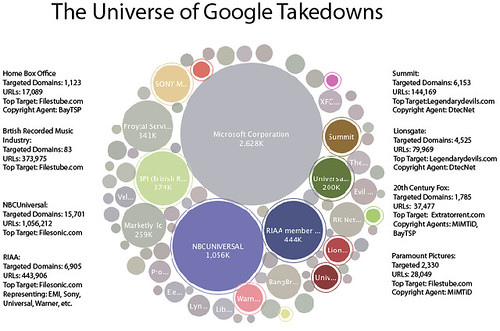 No surprise that music companies, particularly those represented by the RIAA and Britain's BPI, are diligent when coming across content that appears to violate copyrights. Music accounts for at least a third of the 2.5 million-plus URLs that have been removed.

NBCUniversal is responsible for more than a million URLs removed by itself, according to Google, and apparently the company prefers to generate these takedown notices in-house. Other companies such as Fox, Summit, Lionsgate and Paramount appear to rely on help from companies like DtecNet, MiMTiD, and BayTSP to troll the web for possible infringements and send out notices.

"We see this as a positive in terms of awareness," says Rick Cotton, general counsel at NBCUniversal. "In publishing this list, Google is underscoring the massive scale of the problem and, by extension, the need for all the companies involved in the Internet ecosystem to work together to find a solution."

Among the top sites that instigate action from copyright owners are Filestube.com, Torrentz.eu, ExtraTorrent.com, and Filesonic.com.

Google's senior copyright counsel Fred von Lohmann says the majority of takedown requests are legitimate and that the company complies with 97 percent of all requests. But there are errors, he writes on Google's blog, including from "an organization representing a major entertainment company, asking us to remove a search result that linked to a major newspaper’s review of a TV show."

Removal requests to Google appear to be growing. The company says it receives requests to remove some 350,000 URLs per week now, which is more than double what it was getting at the end of last year.

But the data only tells part of the story, according to the RIAA.

The trade association agrees that transparency is important, but writes, "Google’s data misleads by calculating that the DMCA notice requests represent a tiny fraction of the pages on even the most recidivist sites."

Specifically, the RIAA says that Google puts artificial limits on the number of queries that can be made by a copyright owner to identify infringements, limits the number of link removals that can be requested per day and says that constraints on the tools provided to content holders are "are well below what is necessary to identify and notice infringements on the Billboard top 10, much less the entire catalog of the American creative community."

Google's von Lohmann responds, "The 'Transparency Report' lets the data speak for itself, and using that data, independent journalists who did their homework came to the appropriate conclusions about the merits of the RIAA's claims."

The RIAA isn't the only one complaining.

We've also heard from others in the industry who wonder why Google only revealed removal requests on its search engine but not takedown requests sent to subsidiary YouTube. If the company believes in openness, why not publish takedown data from its popular video-sharing website?

"The 'Transparency Report' is a work in progress, and we hope to make additional data from our other products available in the future," says von Lohmann.