Warner Bros. pushes for a restraining order against an alleged trademark infringer by pointing to a study conducted about "Hobbit" confusion.

How many people out there are movie savvy yet also susceptible to ambush marketing?

This isn't a rhetorical question.

Earlier this month, producers of The Hobbit sued the studio behind the low-budget movie Age of the Hobbits, which is set for release the same week in December as the Peter Jackson adaptation of the J.R.R. Tolkien epic. To prevail on a trademark infringement claim, the producers will need to show a likelihood that consumers will be confused about the origin of the so-called "mockbuster." And to show that, new court documents reveal they will present a view of consumers as being both semi-sophisticated and semi-gullible — able to identify The Hobbit as being connected to Warner Bros. or Tolkien or Jackson, yet not able to distinguish Age of the Hobbits from these same entities.

PHOTOS: The Hard Road to 'The Hobbit'

The answer comes from Nielsen National Research Group, which was commissioned by Hobbit producers to investigate the possible confusion. The results were published in court papers this week as the plaintiffs push for a temporary restraining order enjoining the release of Age of the Hobbits to prevent what they warn will be "irreparable harm" should the two films come out at roughly the same time.

Global Asylum, the producer of Age of the Hobbits, has told The Hollywood Reporter that "hobbits" are a real-life human subspecies and that it has a "fair use" right to use the term in the title of the movie.

Notwithstanding that defense, according to the Hobbit producers' legal papers, Asylum is alleged to have made some recent tweaks to its forthcoming movie, modifying the artwork used to promote its film on its website and on Netflix. The new art features the lead actors of Age of the Hobbits above the title, has them pictured, and features other small differences, potentially so that consumers would be less confused.

So the plaintiffs took that new artwork and asked Nielsen conduct a survey, presenting it to consumers as DVD cover art. Nielsen also took a second image where the only thing that changed was the title — instead of Age of the Hobbits, consumers were presented with Age of the Java Men. Here's a look at the images that were presented to those surveyed: 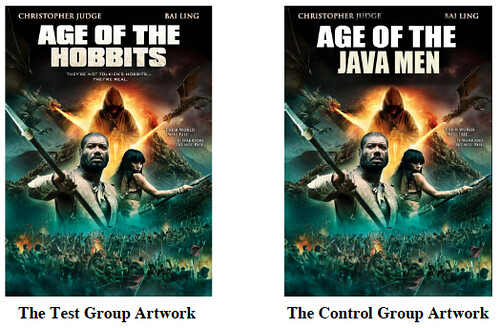 When presented with the "Test Group" and asked who made or distributed Age of the Hobbits, about 30 percent of respondents answered Warner Bros., New Line, MGM, Saul Zaentz Co., J.R.R. Tolkien, or Peter Jackson.

When presented with the "Control Group," and asked who made or distributed Age of the Java Men, that number dropped to 6.42 percent.

STORY: Hollywood's IP Wars: Inside the Fight Over Trademarks

In short, the plaintiffs say that up to a quarter of consumers fit that semi-sophisticated, semi-gullible demographic.

Asylum's opposition papers are due later this week, and presumably, the judge will make a decision about a TRO before The Hobbit hits U.S. theaters Dec. 14.