How Google Got Caught Up in a Jimi Hendrix Copyright Lawsuit

Here's the strange way the web giant is being accused of ripping off photographs of Hendrix and John Coltrane.

Google is being sued for copyright infringement in connection with its Google Music service launched late last year. But this isn't a run-of-the-mill case. It involves photographs of John Coltrane and Jimi Hendrix, the involvement of artist Thierry "Mr. Brainwash" Guetta and a backdrop used to announce Google's new music service.

The lawsuit comes from the estate of Jim Marshall, a photographer who shot influential images from the dawn of rock music. Since dying at the age of 74 in 2010, his heirs have brought a handful of lawsuits against John Varatos, Sony Music and now Google and Mr. Brainwash.

Guetta is a pop artist who works in the legally controversial domain of "appropriation art." He often takes images he finds, photocopies them, and then makes some alterations—sometimes by using bright colors, other times by doing things like piecing together thousands of broken phonographic records onto his image. He was the subject of the Academy Award nominated Banksy documentary Exit from the Gift Shop. Last year, Guetta was sued for copyright infringement by another photographer over an image of Run DMC that he used. Mr. Brainwash lost the case.

Now, Douglas Linde, the attorney who represented the winning side in last year's dispute, is back with a new lawsuit against Guetta on behalf of the Marshall estate. At issue is artwork allegedly derived from Marshall's photos of Coltrane and Hendrix.

So how does Google fit in?

Google is also being sued for copyright infringement for using the alleged Mr. Brainwash work as backdrops to its announcement last November of its Google Music service. The plaintiff says that Google used "huge blow-ups" of the images and it attaches in its complaint an image that ran in the Los Angeles Times as proof. Here's a look: 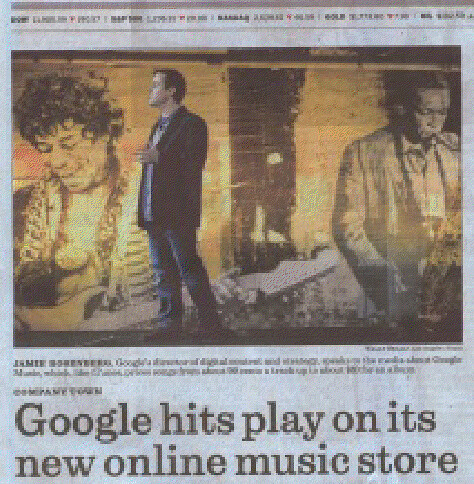 Gueta allegedly authorized Google to use his image without the estate's permission. And then Google allegedly directed others to make copies. The company, according to the complaint, "held an invited commercial event that they had the right and ability to supervise, wherein they invited, directed, requested and authorized others, to photograph the Infringing Backdrop, for the purpose of reproducing the images."

Now, the Marshall estate says the work is all over the Internet, and it wants to punish the defendants for willful copyright infringement, demanding defendants' profits and statutory damages.

Google hasn't yet responded to our requests for comment.