How the Recording Industry Intends to Win Billions From LimeWire

Record labels have scored a victory in their litigation against LimeWire by getting a New York federal judge to agree they are entitled to seek statutory damages on a per-song rather than a per-album basis. The labels are also preparing for the coming trial next month by introducing an argument for why they deserves statutory damages.

On Monday, Judge Kimba Wood made her latest ruling.

The plaintiffs have identified 9,715 sound recordings infringed on the LimeWire system. Damages could run as high as $150,000 per "work," but Judge Wood had to figure out what constitutes a "work."

LimeWire argued that where a record label made available a particular sound recording as part of an album, that record label should only be able to recover one statutory damage award for all the sound recordings contained on that album. Judge Wood disagreed, saying that individual tracks constitute "separate works," even if they are issued "together as a unit."

As a result of the ruling, the tab on LimeWire's damages could run as high as tens, or maybe even hundreds of billions of dollars.

But the record industry believes it deserves the high damages.

In a trial brief, the labels foreshadow the opening argument they will make before a jury:

"The evidence will demonstrate that there has been a $55 billion decline in record industry revenue over the last decade. Plaintiffs and Defendants disagree as to whether mass filesharing through peer-to-peer services has been the primary cause of this decline (Plaintiffs' position), or just one of several causes (Defendants' position). But even if LimeWire caused only a fraction of this decline, Plaintiffs' damages would still be in the billions of dollars. Plaintiffs will offer evidence at trial demonstrating that far greater than a fraction of this harm was caused by LimeWire."

The industry then points out how LimeWire was the most popular file-sharing program, downloaded more than 150 million times, how it was used "overwhelmingly" for illegal filesharing, and caused "staggering amounts of harm."

For those more info-graphically-inclined, the recording industry adorns its trial brief with the following line graph, which is sure to be blown up real big and featured on a placard before a jury. 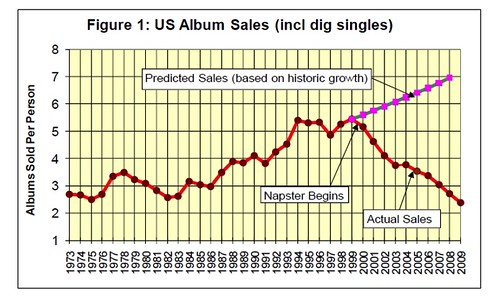 Here's the full trial brief that spells out the plaintiffs' case: