The "substantial" offer for "Jersey Shore" cast member Mike Sorrentino to NOT wear Abercrombie clothing was $10,000 and came after the retailer had put out a press release. Will the First Amendment and Sorrentino's trademark inadequacies protect the company from a $4 million lawsuit over an alleged publicity stunt?

Last month, Mike "The Situation" Sorrentino from Jersey Shore sued Abercrombie & Fitch over what he saw was a less-than-amusing publicity stunt. The retailer had offered him a "substantial payment" to stop wearing its clothes, and introduced a line of clothing that seemingly aped Sorrentino's famous catch phrases. In response, MPS Entertainment, the company owned by Sorrentino and his brother, filed a $4 million lawsuit alleging trademark violations, deceptive advertising and misappropriation of his publicity rights.

On Monday, Abercrombie & Fitch responded in court with a very detailed motion to dismiss. The clothing company tells a slightly different story of what happened. Additionally, the defendant attacks Sorrentino for weak trademark claims and says the Jersey Shore castmember is interfering with its First Amendment right to make light of a troubling situation.

Here's A&F's side of the story, which begins on an episode of Jersey Shore that aired on August 11.

PHOTOS: The Best and Worst Moments of ‘Jersey Shore’

The retailer says it was concerned that "the prominent display of its A&F logo would be viewed as an endorsement by A&F of the raucous behavior on the show."

Reality TV shows often blur out brand names. Not this time, allegedly. So A&F sent a letter to MTV with a request that its marks be pixilated out of future episodes. Along with the demand allegedly came an offer that MTV, Sorrentino and other castmembers would be paid money for not wearing its products. Sorrentino's camp says it never got such an offer, but here's a look at the letter to MTV co-general counsel George Cheeks, revealing that the "substantial" offer to stop wearing A&F clothing was for $10,000: 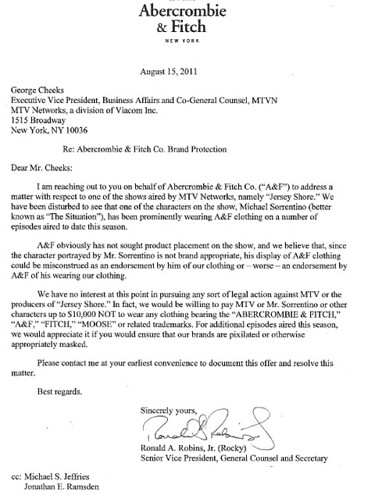 In his lawsuit, Sorrentino says that A&F's efforts to contact MTV were all part of a "marketing ploy." Even if MTV was contacted, the star says that such an offer was never conveyed to him. A&F responds that it doesn't matter. "Whether the offer letter went directly to Sorrentino is immaterial, and does not establish the falsity of the offer that Plaintiffs allege was made," the company writes in its motion to dismiss.

Sounds good. Here's the problem: Was this a sincere and timely offer?

The letter above is dated August 15, yet A&F had already had put out a press release three days earlier noting that it had offered compensation to Sorrentino to cease wearing A&F products. Additionally, although one presidential candidate is getting slammed as being out-of-touch for casually offering up a $10,000 bet in a recent debate, we'll wager that "up to $10,000" wouldn't impress many Hollywood dealmakers as being very "substantial."

A&F says it had placed an order in January 2010 for two t-shirts featuring phrases that parodied Jersey Shore. The company says that Sorrentino was aware of the parody t-shirts  for almost a year and never objected.

The retailer goes on to dispute Sorrentino's trademark dominion over "The Situation" and "GTL," saying the evidence shows merely that the reality star has applied to register those marks. The applications have not yet been granted by the U.S. Trademark Office.

Additionally, the use and "good will" of the mark is questioned. It's noted that MPS supposedly acquired rights to a stylized upside-down "Situation" mark and design from a retailer named Yak Shoes, but A&F questions the validity of this assignment since there has been no transfer of business nor evidence that the mark and design has been used. Besides, A&F points out that the asserted trademark registration and A&F's clothing aren't very similar and its products are unlikely to confuse consumers.

The clothing retailer provides some good reasoning to doubt whether Sorrentino will eventually succeed in registering GTL. It's pointed out that Viacom (parent company of MTV) actually holds a trademark registration for "GYM TANNING LAUNDRY" and has been offering on its website t-shirts for sale bearing "GTL."

"Based on both MTV's and other Jersey Shore castmates' use of 'GTL', Plaintiffs cannot establish that they are the single source of goods being offered under the alleged mark 'GTL', and their unfair uncompetition and false designation of origin claim under 1125(a) must fail," says the brief.

Perhaps most important is the question whether A&F's use of Sorrentino and his catch-phrases is constitutionally-protected free speech. A&F says that its shirts and use of the star's likeness was parody -- clearly a joke, not intended to convey sponsorship:

"A&F's t-shirt bearing the phrase 'The Fitchuation' was a pun or turn of phrase, parodying Sorrentino's nickname for himself as 'The Situation'. As Plaintiffs plead, Sorrentino has appeared on several nationally televised programs and as such is a public figure, subject to being parodied by virtue of his presence in the public eye. Additionally, the t-shirt bearing the phrase 'G.T.L. (You Know The Deal) Fitch', was poking fun at the Jersey Shore castmates self proclaimed habit of doing the 'GTL', i.e. 'gym, tanning laundry.'

We have no idea what makes the average guido in Jersey laugh, and we know the old saying that the best way to kill a joke is to explain it, but was this actually humorous? Whether the judge chuckles and chucks....stay tuned.