Jersey Shore cast-members might live by the creed GTL -- gym, tanning, and laundry -- but suntan lotion alone can't stop Jenni "JWOWW" Farley from experiencing the burn of a lawsuit. The reality star is being sued by a company for allegedly infringing the copyright on a suntan lotion bottle design.

The suit was filed today in Oklahoma federal court by Phigogam, a business partnership of three friends from the University of Oklahoma.

According to the complaint, in 2007 plaintiffs Eric Bramlett, Wesley Cox and Paul Rudnicki started a website called Tantans.com, selling tanning lotions directly to the public. Soon, they realized that their profit margins would be larger if they sold their own line of tanning lotions instead of re-selling popular brands, and to make that happen, they decided that having a celebrity tie-in would provide the proper shine.

That led them to Jersey Shore, the MTV series that's famous for the way its cast love to take care of their bodies. Initially, the plaintiffs tried to recruit The Situation and Pauly D as their celebrity endorsers, but after no response, they reached out to JWOWW, who they felt had the "look and image" for a tanning lotion promotion line.

The plaintiffs say they contacted Farley through her then-agent and boyfriend, Tom Lippolis, and starting in February 2010 and continuing through July 2010, the parties negotiated the look of the Tanning Bottle. The plaintiffs allege they contributed the first bottle design and then took revisions, and finally came up with this image: 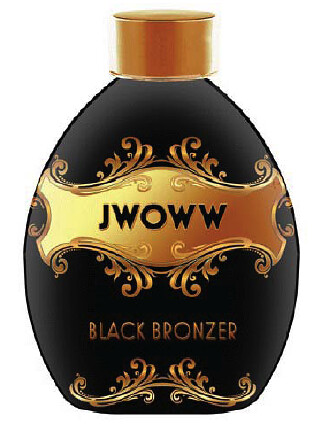 In July 2010, one of Farley's reps, believed to be Lippolis, allegedly suggested taking the idea to Australian Gold, a big producer of tanning lotions. The plaintiffs are said to have been receptive and sent their bottle design to the company for consideration.

Then, the third season of Jersey Shore happened. Lippolis and Farley broke up, purportedly because Farley had a relationship with Pauly D during the filming. The breakup may have indirectly caused a ceasing of communication between the Farley camp and the plaintiffs.

Lippolis is currently suing Farley. The dispute has become most notorious for naked pictures, but Lippolis is also claiming he helped her on the endorsement front, including a tanning lotion deal with Australian Gold.

But now, the three men from Oklahoma say that Farley and Australian Gold have ripped off their bottle and cut them out of the deal. They say the design has been registered with the U.S. Copyright Office and that they are the exclusive owner of reproduction and distribution rights.

The plaintiffs say that JWOWW Black Bronzer set a tanning lotion record, selling 115,000 bottles in five months. And they point to Farley's Facebook and Twitter pages as proof that she's strutting the allegedly copyright-infringing product.

Interestingly, Farley is the only Jersey Shore cast member to have successfully trademarked her show name, which may go some way toward explaining why she's not facing a trademark claim here. Instead, she's being sued for breach of contract, copyright infringement and unjust enrichment.

The plaintiffs demand an injunction against further infringement, all profits, and further damages.