The DOJ's settlement with three publishers drew controversy from many in the publishing business who disagreed with how the government was reading competitive threats.

U.S. District Judge Denise Cote has signed off on the Justice Deparment's settlement with three publishing giants over allegations of an antitrust conspiracy to fix the prices of e-books. The New York judge blessed the agreements on Thursday with Simon & Schuster, HarperCollins and Hachette despite noisy objections from some publishers, book retailers, authors and others.

The U.S. government sued Apple and several publishers last April. The lawsuit was the result of an investigation on Apple's entry to the electronic book market upon the introduction of the iPad.

Before the market entry, Amazon.com was the market leader, using a "wholesale model" where it bought books and sold them at cheap prices. Then, Apple came along, and helped pave the way to an "agency model" whereby publishers set prices and Apple would take a 30 percent commission. The government alleged that Apple had acted as the "hub" of dealmaking where publishers colluded with each other to set floors for e-book pricing.

The government settled with CBS Corp's Simon & Schuster, News Corp.'s HarperCollins, and Hachette, but Apple and some publishers like Penguin held out. (A trial could be held next year for those defendants.) The terms of the deal include stipulations not to use the agency model for two years.

The proposed settlements got about a 1,000 comments from parties such as Barnes & Noble, the Writers Guild and the American Booksellers Association who argued that Amazon's aggressive pricing threatens to put publishers and brick-and-mortar bookstores out of business.

Some of the comments were quite colorful including one amicus brief from Bob Kohn, the chairman and CEO of RoyaltyShare, who used his allotted five pages to express his dissatisfaction in comic form: 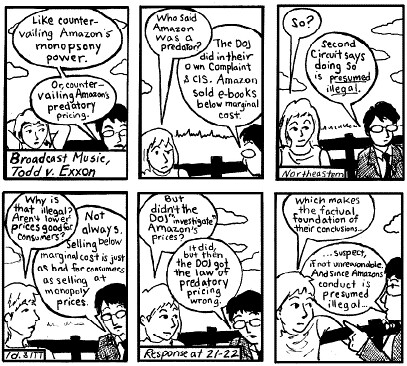 But the heavy objection wasn't enough for Judge Cote.

"Even if Amazon was engaged in predatory pricing, this is no excuse for price-fixing," she ruled.