After Deschanel offers evidence that retailers have been selling a "Zooey shoe," a judge tentatively finds there's triable issues in her lawsuit against Steve Madden.

Zooey Deschanel is on a bit of a hot streak at the moment. Not only is the actress starring in the new Fox ratings hit, New Girl, but she's on the verge of having her lawsuit against shoemaker Steve Madden and various retailers heard by a jury.

When Deschanel originally filed the lawsuit in LA Superior Court against Madden last December, the bare-boned complaint didn't offer much.

In the original lawsuit, Deschanel claimed that her agent negotiated an oral $2 million deal for the company to use the actress's name and likeness in connection with shoes and accessories. Later, upon difficulties with a retailer, Madden lowered the offer to $1.5 million, which Deschanel accepted only to find that Madden had repudiated the amended agreement with no explanation.

Deschanel was probably going to have a tough time proving the existence of a fully-executed oral contract, but then, something changed.

Reps for Deschanel purchased a pair of "Candie's Zooey shoes" at the website of Kohl's Department Store and had it shipped to Beverly Hills. A screenshot was also taken: 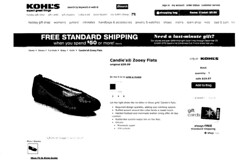 The existence of a "Zooey shoe" soon had Deschanel's lawyer, Joe Schleimer, filing an amended complaint.

According to the new allegations, Madden had an exclusive contract with Candie's to design, manufacture, and distribute footwear. Kohl's was selling Candie's shoes, including the above-pictured "Zooey shoe," and so, connecting the dots, it's not hard to see why the lawsuit suddenly became more serious.

Now, either Madden had allegedly gone ahead with its plan, but never paid Zooey for her endorsement. Or, Madden had no deal, but was selling a Zooey shoe. Both were subject to claims so Deschanel's amended complaint included both allegations of breach of oral contract and infringement of rights of publicity.

Madden asked a judge to dismiss the case on summary judgement for a host of reasons, including the non-existence of a contract and the fact that the defendants (now including Candie's and Kohl's) hadn't used Deschanel's name and likeness.

But there's enough "triable issues" for LA Superior Court Judge Abraham Kahn to have tentatively decided to proceed forward on the questions of "(1) whether there was a meeting of minds on sufficient material terms, (2) whether any exception to the Statute of Frauds applies such as the possibility of performance in less than one year, and (3) whether Defendant had Plaintiff in mind when using the name 'Zooey' in selling the subject shoe..."