Can Julie Taymor Shut Down 'Spider-Man: Turn Off the Dark'? (Analysis)

Producers are said to be preparing licensed productions around the globe, but the director aims to prevent that from happening without her approval.

Julie Taymor's lawsuit against producers of Spider-Man: Turn Off the Dark might be a much bigger deal than most people realize. The initial media coverage of the suit Tuesday presents Taymor's claims as a dispute over owed royalties -- which is certainly part of what the director is seeking, but not all of it. In fact, as strange as it sounds, Taymor's million dollar claims are obscuring the potentially billion dollar ones.

How do we come to this calculation?

Check out the money that was reaped by Taymor's last blockbuster Broadway musical, The Lion King.

Most hit musicals don't make the big bucks in ticket sales. According to Taymor's lawsuit, Spider-Man: Turn off the Dark has already grossed $60 million in revenue. That doesn't include running costs, however. One study concluded that if the show merely relied on Broadway box office to fill the coffers, it would take 4 years before it even began showing a profit.

Rather, the biggest pot of money comes through licensing productions around the world and other ancillary income.

Which brings us back to Taymor's lawsuit and the single most threatening thing about her complaint:

Is this a real possibility or merely leverage to extract a settlement on Taymor's breach of contract claims? Regardless of the answer, Taymor is putting on a good show in her ambitious copyright claims.

According to the complaint, in August 2005, Taymor signed a deal memorandum with producers for her services as a co-bookwriter, which she terms an "Author Deal Memo."

The agreement provides that Taymor "as a co-owner of the book of the musical...shall have approval...over dispositions of rights to the Musical, and all other decisions customarily reserved to the authors of the Musical."

It's possible that the agreement was merely giving her final cut on Broadway, not an interest in derivative licensed versions of the show elsewhere.

But Taymor then goes on to offer a theory that even though Spider-Man adapted its book by changing characters and revising some plot lines after she was let go, it still constituted an infringement since the new book copied substantially similar expression from her original treatment and book. "In total, over 350 lines of dialogue and descriptions of stage activity -- nearly one quarter of the Infringing Book -- are copied verbatim from Taymor's Original Book," the complaint says.

Then, Taymor's complaint presents a side-by-side comparison of stage activity, plot arcs, and dialogue so that a judge can see the alleged substantial similarity. Here's one example of how Taymor is attempting to claim copyright in descriptions of stage activity: 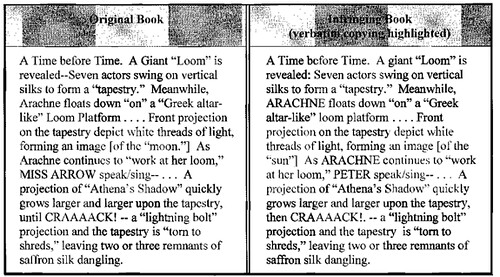 "With respect to the current Broadway production of the Musical, Taymor is entitled to a permanent injunction barring Defendants from using copyrighted elements of her Original Book without compensating her for such use and honoring their contracts with her...

Taymor is entitled to a permanent injunction barring Defendants from any future use of copyrighted elements of her Original Book in any medium whatsoever, including any future production of the Musical in venues other than on Broadway and any 'making-of' film or video, without Taymor's written consent."

Yes, Taymor is looking to stop the show if she's not paid appropriately.

No doubt that defendant Michael Cohl's 8 Legged Prods will have arguments that will look to limit Taymor's claimed interest in future productions of Spider-Man, but there's an open question about whether the defendants are really going to put a potential billion-dollar enterprise on the line in lieu of just paying Taymor a tidy sum to go away.

Taymor may never ultimately get a judgment that grants her an injunction. but will licensees take that chance? What will the insurance premiums be on a licensed production that is one potential adverse judgement from getting shut down?

Cohl has responded to Taymor's lawsuit by saying that "fortunately the court system will provide, once and for all, an opportunity to resolve this dispute," but if he really plans on more Spider-Man productions around the world, we wonder if there's not a much greater possibility this case settles.