Forensic document analysis, DNA tests, and multiple iterations of the same letter are all part of an ongoing lawsuit from two brothers claiming that the studio is a thief.

Two weeks ago, we reported how a strange letter had turned up after the 9th Circuit Court of Appeal had revived a lawsuit brought by Aaron and Matthew Benay, who had also authored a WGA-registered script entitled "The Last Samurai." The letter arrived anonymously from an individual who seemingly loathes Warner Bros. and has familiarity with their various legal troubles. The letter included private e-mails from producers of The Last Samurai and purports to show that the plaintiffs’ work was indeed stolen.

Warner Bros. is enraged by the letter and has an idea about who's behind it. The studio believes the documents are a forgery, and that the letter came from the plaintiffs’ side. On Wednesday, Warners asked a Los Angeles Superior Court judge to terminate the case as a necessary punishment to prevent fraud on the judicial system.

But the Benay brothers are fighting, pointing to a DNA test that shows they weren’t behind the mystery letter, and hurling tampering charges against Warner Bros.

Here’s a look at the letter.

Dated March 29, 2011, the mystery letter comes from someone who says he used to admire Warner Bros., but now can’t stand “their deceit.” The letter runs a bullet point list of the company's various legal strifes.

Interestingly, one prominent individual mentioned high up in the letter is Marc Toberoff, the attorney who has been waging war against the studio for many years. Toberoff’s various battles representing the creator of the Dukes of Hazzard TV show and the estates of the creators of Superman are mentioned, including a note that an anonymous letter became evidence in the studio’s lawsuit against Toberoff.

The letter references the lawsuit brought by Alan Ladd, Jr. over profits from a string of hit films in the 1980s and ‘90s.

And the letter reports some things that have never been reported and we certainly can't confirm. For example, that producers of Shakespeare in Love settled for millions of dollars a lawsuit alleging the idea behind the film was stolen.

The bulk of the letter is comprised of purported communications from Warner Bros. vp Kevin McCormick and Last Samurai director/producer Ed Zwick that we described in our earlier story. Here's a full look at the letter that has sparked the legal firestorm:

Pretty inflammatory stuff. The Last Samurai dispute has turned into an exercise in the jurisprudence involved when purported smoking-gun evidence turns up on the eve of a big hearing. Read on...

The plaintiffs have been pushing to reopen discovery in the case.

Warner Bros. says that the plaintiffs haven't taken "any diligent steps to authenticate" the documents and that by declaring to the court that the documents are genuine in an effort to reopen discovery, they haven't satisfied their burdens.

Instead, Warners has made its own investigations, and in the motion for terminating sanctions filed on Wednesday, declares that it "can forensically demonstrate they are fake."

The studio points to erroneous time stamps on e-mails, discusses Zwick's handwriting in an effort to show that it was a cut-and-paste job, and calls out subtle printing errors. Warners concludes that the plaintiffs have committed forgery, perjury and deception. Here's an example of what an effort to forensically prove something is fake looks like in the modern age: 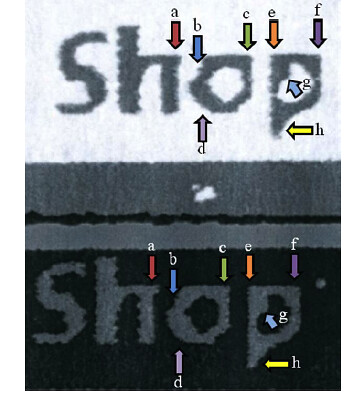 And here's a full look at Warner Bros.' motion with the reaction from the plaintiffs on the next page:

We contacted John Marder, the attorney representing the plaintiffs.

"I can say this for certain," he says. "My clients and no one related to my legal team has any connection to it. The Defendants went as far as taking DNA evidence from my clients to investigate their involvement and by their silence, it appears the test ruled them out."

Marder adds that he is not wed to the documents as "there is so much evidence against the defendants, the veracity of the documents they are questioning means little to me."

Then, Marder hurls counter-accusations against Warner Bros that the studio is the one really messing with the evidence. He points to the fact that Zwick claimed he was working on Last Samurai as far back as May 16, 2000. The defense was asked to produce evidence that would show this. In turn, a letter was produced from Zwick describing his ideas on the film.

"But here are where things get weird," says Marder.

It seems possible that some of the letters were merely drafts and the letter wasn't sent right away, but Marder believes it demonstrates the reality of defendants' "extensive record of document tampering."

Here's a look at this document:

A hearing on the issues of discontinuing the case or pressing forward for further discovery will be held soon.