After a consolidated class action took a turn for the worse for plaintiffs long pursuing Live Nation over the alleged monopolization of live rock concerts, a global settlement is being finalized.

A long-running dispute over whether Live Nation and former parent Clear Channel engaged in anticompetitive conduct in the promotion and pricing of live music concerts could be headed for some resolution. On Tuesday, lawyers for the company and a class of nationwide plaintiffs told a California federal court that they were finalizing a global settlement agreement that would lead to the dismissal of various claims that span back a decade.

In 2002, an individual named Malinda Heerwagen filed a putative class action against Clear Channel that alleged monopolization in the live-music concert industry. Her lawsuit was followed by 22 other class action suits around the country.

In 2006-07, a federal court in California consolidated many of these lawsuits and certified classes in the five major markets of Los Angeles, Chicago, New York/New Jersey, Boston and Denver.

Since then, the parties have been fighting at the pre-trial phase, but in March, the consolidated action took a huge hit and, barring an appeal or amendments to claims, a development that could have become a fatal blow.

The judge ruled the plaintiffs couldn't use the testimony of its expert economist, Dr. Owen Phillips, who ran some analysis of the damage of escalating concert prices due to the defendants' alleged anticompetitive behavior.

But the judge found that he was assuming that the difference in ticket prices was merely due to monopolization instead of looking at other possible explanations, such as Live Nation artists commanding higher ticket prices than less popular artists who worked with other promoters.

The economist used other methods, including data from "competitive" periods to predict expected ticket prices. The results of the research were transformed into graphs like the one below, which if introduced before a jury, could have been swaying: 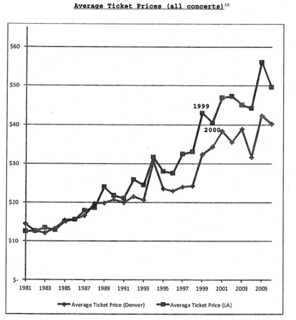 But again, the judge said that the economist didn't consider other factors, including possible changes in concert quality during the time, the emergence of digital downloading, and other factors that could have led to higher-than-expected prices.

Perhaps most importantly, the judge found that the plaintiffs and their economist were having trouble identifying the relevant market that was allegedly monopolized. The economist's report talked about "live rock music concerts" but didn't say if that was characteristic of a broader category of music (e.g. "rock/pop) or a sub-genre ("classic rock" or "heavy metal"), didn't clarify what unique production facilities make for a live rock music concert experience as opposed to say, a jazz concert, and didn't address things like vendors and customers.

The failure to identify the product market led to the judge's conclusion that the economist had relied on unreliable methodology. Because the plaintiffs didn't pin down what area was actually subject to dispute, the judge accepted Live Nation's motion for summary judgment and dismissed claims of monopolization and unjust enrichment.

Potentially new lawsuits with better analysis and bolstered claims could have been made against the company. So perhaps the parties had an incentive to work things out. The judge ordered both sides to meet and confer about how best to proceed, and they came to an agreement. Terms are not known but would presumably cover global claims made against Live Nation for the designated period unless potential class members explicitly opt out of the settlement.