It's perhaps not as dirty as people imagine.

LMFAO, the Los Angeles-based electronic pop duo of Stefan Kendal Gordy (RedFoo) and Skyler Austen Gordy (SkyBlu), enjoy a bit of culture cachet, no doubt based in part on their unique name. The legend goes that the band name was negotiated with the pair's grandmother, and since popping up as a favorite act of Paris Hilton and others, a lot of parents have no doubt searched the Internet to find out the meaning of the acronym their kids love. Some realize quickly the dirty connotation; others stumble upon the alternative, "Loving my friends and others."

"Laughing my freaking ass off."

The band first applied for a trademark in 2008. It was rejected by a trademark examiner on the basis that the mark "consists of or comprises immoral, deceptive or scandalous matter."

But over at the DuetsBlog, Catlan McCurdy, an IP attorney at Winthrop & Weinstine, notes that an individual last year attempted to trademark "LMFAO" for clothing. Asked by the examiner whether the term had any significance in the clothing industry, the attorney representing the applicant diplomatically responded, "“LMFAO appearing in the mark means or signifies or is a term of art for Laughing My Freaking Ass Off in the relevant trade or industry or as applied to the goods/services listed in the application.”

Even before any prompting by a trademark examiner, the band's lawyer clarifies what LMFAO stands for in a miscellaneous statement within the currently pending application. Here's a look at the document that proves that some lawyers know how to take the fun out of anything: 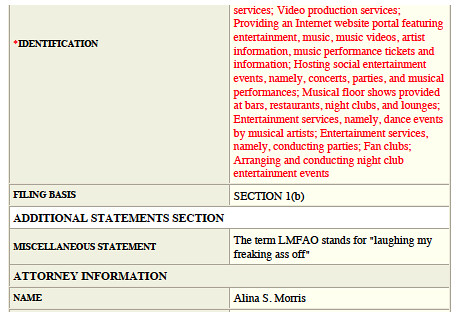