Shareholder class action says that company's board put personal interests ahead of investors in recent statement to the SEC.

An investor in Martha Stewart Omnimedia has filed a shareholder class action attempting to stop a vote scheduled at the company's annual meeting next month on whether to approve the issuance of 4,557,272 shares of Class A stock. The board of directors has recommended the proposal, but the investor points to statements in the company's SEC filing that allegedly are not full and accurate.

Helene Hutt filed the lawsuit in New York Supreme Court on Tuesday on behalf of herself and others similarly situated.

The plaintiff says that the stock issuance vote -- titled "Proposal 2" -- hasn't been fully and accurately described in an April 9 filing to the SEC, and that the company and its directors "have acted to potentially put personal interests ahead of the interests of Martha Stewart shareholders."

Among the alleged defects cited is that the proxy statement fails to disclose the criteria to implement Proposal 2, how the board determined the number of additional shares requested to be authorized, the potential equity value of the issuance, and the dilutive impact that issuing more than 4.5 million shares would have on existing shareholders.

On the latter point, the upset shareholder has included a graph to illustrate the alleged dilutive effect of Proposal 2: 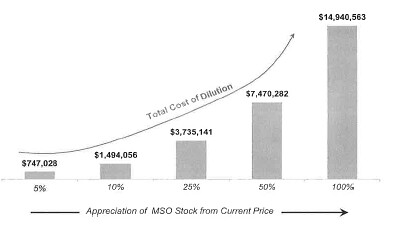 Since April 9, the stock price of the company has fallen 8 percent to $3.48 a share.

A spokesperson for Martha Stewart Omnimedia says, "We do not believe the suit has merit."