Meth Dealer Walter White Has Been Captured by Police

The Alabama meth cook who shares a name with Bryan Cranston's "Breaking Bad" character has been apprehended.

On AMC's Breaking Bad, Walter White is still cooking meth as DEA officers including his own brother-in-law remain oblivious to the "Heisenberg" who has been supplying New Mexico with potent "blue sky."

But in real life, the Tuscaloosa County sheriff's office in Alabama has finally captured its own Walter White, who rose to the "Most Wanted" last week after missing a court appearance.

He is said to have violated the terms of his probation earlier this year after getting back into the cooking meth racket. On August 9, following a missed court appearance, a county judge ordered his capture.

White doesn't look that much like Bryan Cranston, who has won Emmy Awards for playing the more famous albeit fictional Walter White. Both are in their 50s, however.

Who knows whether the real Walter White earned more business as a result of the AMC show. The misfortune of sharing a name, however, might have made it tougher for the Tuscaloosa guy to stay underneath the radar and elude capture.

The Tuscaloosa sheriff's office has now updated its "Most Wanted" by planting a big red "captured" tag across Mr. White's face. 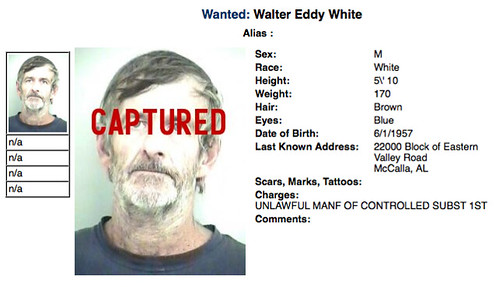