In May, Bill Dawson, a graphic designer based in California, went to the movies and became upset when he saw the trailer for Conan the Barbarian. Dawson thought he spotted something familiar at the end of the preview in the lower left corner of the screen. Now, six months later, Dawson has filed a lawsuit that alleges that producer Millennium Films stole his graphic design to create its logo.

As we previously reported, the makers of Conan the Barbarian are currently facing a lawsuit that alleges they don't own rights to the character of Conan. Characters, plots, dialogue...these elements have all been known to spark copyright infringement lawsuits. But if there's anything that one figures a movie company to rightfully own without question, it's the company's own logo, right?

According to the claims, Millennium, owned by Nu Image, was looking for a new logo. So it turned to Technicolor, a company that provides technical production services for film and TV producers,

Dawson, head of the XK9 graphic studio, says he negotiated a verbal contract with Eric Ladd, an agent for Technicolor. Dawson would develop and present possible logos to Millennium in exchange for a nominal fee, the lawsuit states. If one of Dawson's logos was chosen, further compensation would be negotiated, according to the complaint.

Dawson completed his work and showed it off to Millennium, which purportedly expressed no interest at the time in buying it.

But now, the plaintiff says the film company has used without authorization one of his logos in several films, including Conan, Elephant White, Trespass and Puncture, as well as on its website. Dawson is claiming at least $200,000 in damages for copyright infringement and breach of contract. Perhaps even more of a potential nuisance for the defendants, Dawson also demands that all products, advertising and marketing materials bearing his unauthorized copyrighted work be delivered for destruction.

It bears noting that Nu Image is currently involved in litigation against tens of thousands of individuals who are alleged to have infringed the copyright on films such as The Expendables and is considering similar action against pirates of Conan the Barbarian.

In May, Dawson described on the XK9 blog his first realization of the alleged logo theft. He posted these images as evidence: 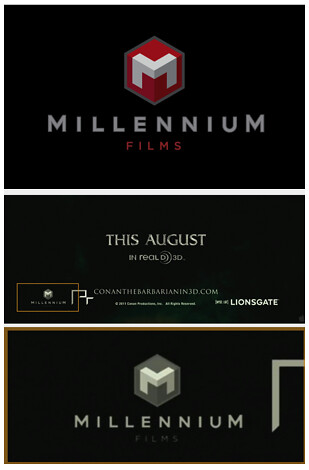