An examiner recently rejected an application for a "Scrotal Support Garment," citing the famous swimsuit worn by Sacha Baron Cohen.

It looks like Sacha Baron Cohen has a fan at the U.S. Patent & Trademark Office.

A patent examiner there recently rejected an application for a "Scrotal Support Garment," which bears great similarity to the swimsuit that Cohen famously wore in Borat. In the non-final rejection, the examiner pointed to a picture of Borat found on the Internet and included a humorous diagram to show prior art.

Fans of Borat will no doubt recognize in the patent application an image that looks familiar. In 2009, three years after the film came out, inventor Donald R. Quinn attempted to patent this apparatus, describing his invention as relating to "medical appliances and support devices for male genitalia, and particularly to a scrotal support garment that provides support for the scrotum for patients having ailments or medical conditions affecting the genitalia or groin in order to relieve pain or discomfort."

Here's a look at the image in the application: 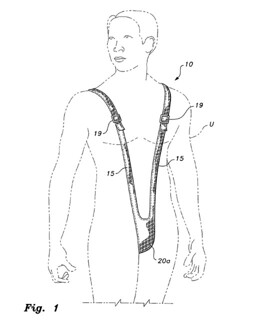 The patent examiner wasn't impressed. Last autumn, he sent back this image: 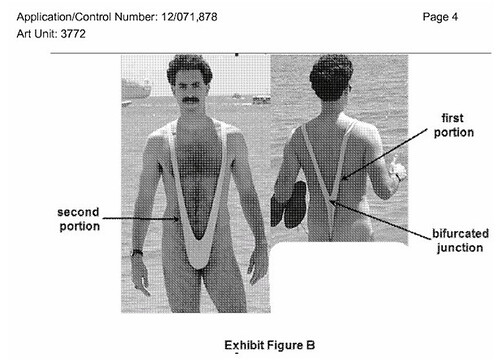 According to USPTO records, the inventor hasn't given up. Two weeks ago, the patent applicant made a request for an extension of time to respond to the non-final rejection.

Stewart Walsh, a professional patent searcher, writes at IP Watchdog that the "teaching point is that prior art can be found anywhere" and that patent examiners can look beyond past patents to find reasons for rejections in pop culture. He also points to Samsung's recent defense against iPad patent claims made by Apple in which the company pointed to Stanley Kubrick's 2001: A Space Odyssey.