The estate of author J.R.R. Tolkien is testing the principle, "You can't be sued for suing."

In November, the estate and book publisher HarperCollins filed an $80 million lawsuit against Warner Bros., its New Line subsidiary and Saul Zaentz Co. -- which holds the rights to The Hobbit and The Lord of the Rings --  looking for a federal judge to declare that the defendants had overstepped their rights by looking to exploit Hobbit/Rings online slot machines and games.

Earlier this month, Warner Bros. brought counterclaims that allege the Tolkien estate's "repudiation" of contractual rights has cost Warners to miss out on millions of dollars of licensing opportunities.

On Thursday, the estate asked a judge to dismiss Warners' move, saying the studio is attempting to dress up an inappropriate claim for malicious prosecution.

When it comes down to it, the latest scuffle is over a single word: repudiation.

Warner Bros., represented by attorney Daniel Petrocelli, says it and Zaentz are the successors-in-interest to merchandising and other rights to Hobbit and Lord of the Rings from a United Artist agreement from 1969. Together, the studios say they have been exploiting the rights for decades and that 16 years ago, Zaentz's rights to online video games were confirmed. Now, there allegedly has been an about-face.

Whether or not that's true, the estate, represented by attorney Bonnie Eskenazi, believes that the objectionable activity "springs from an attempt to enforce the relevant contract," not to repudiate it.

The estate compares how the original counterclaims from January differ from what is now being asserted. Here's a look at the side-by-side language: 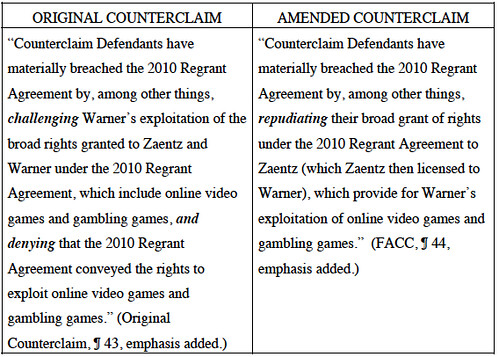 The problem, as Eskenazi spells out in her motion to dismiss (read in full here), is that communications made in anticipation of litigation are privileged and can't serve as the basis for a claim. Eskenazi says she brought up the alleged defect in response to the January counterclaims, and as a cure, Warner Bros. simply replaced "challenging Warner's exploitation" to "repudiation."

She says that Warners' "patently absurd" breach-of-contract claim is "is really nothing more than a thinly veiled, deficient claim for malicious prosecution," which can be brought if Tolkien has made a "bad faith" lawsuit against Warners, but not at this early stage.

The Tolkien estate also says there has been no repudiation -- that there hasn't been any allegation that it has failed to perform its legal obligations. The fight, says the estate, is just about the "scope" of contractual rights. "Put another way, the Warner Parties have sued the Tolkien/HC Parties simply for suing them," says the motion to dismiss.

The Hollywood Reporter has reached out to Warner Bros., and if the studio has anything to say, we'll update.