It's 'Battleship' v. 'American Battleship' -- two films scheduled for U.S. release within days of each other. One is a big-budget studio film. The other allegedly pretends to be one.

Universal Studios is going to war against Global Asylum, an adversary that is in the business of producing low-budget knockoffs of major motion pictures.

After spending more than $100 million to produce Battleship, its blockbuster to be released in the U.S. on May  18, and spending $30 million in advertising, Universal is upset over Asylum's own straight-to-DVD film, entitled American Battleship, which purportedly features similar artwork, packaging, release dates, and film trailers and will be released on May 22.

Universal has rights over Battleship through a 2010 licensing agreement with Hasbro, which has produced Battleship board and video games for many years. The film about a war at sea against aliens is directed by Peter Berg and stars Liam Neeson, Alexander Skarsgard, Rihanna, Brooklyn Decker, and Taylor Kitsch.

PHOTOS: 28 of Summer's Most Anticipated Movies

Meanwhile, Asylum is allegedly in the business of "mockblusters," with films such as Transmorphers, Almighty Thor, Sunday School Musical, The Da Vinci Treasure, and Snakes on a Train. Universal quotes an Asylum executive as saying, "We go after the tentpoles -- the big studio titles -- for the most part.  They have the most audience awareness and interest..."

Universal points to Battleship's distinctive title design (all-capitalized stencil-like font, characterized by a steely grey color and use of gradient), poster artwork (a dark stormy sky with an alien spacecraft rising out of the ocean), advertisements (a one-minute commercial at the Super Bowl, a website, cross-promotional partnerships with Subway, Coke Zero, Kraft, etc.) and more, and alleges that Asylum is threatening the goodwill of these marks. 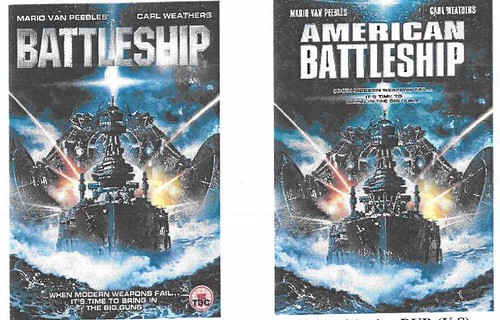 Additionally, Universal says that Asylum's alleged knockoff imitations and business strategy "is intended to and does confuse consumers as to the source or origin of Global Asylum's productions by causing consumers to believe they are the same as or associated with contemporaneously released blockbuster films from major motion picture studios."

As evidence, the studio points to one Amazon.com customer who after buying Asylum's John Carter of Mars, commented, "I thought I was buying the Disney version" and another customer after buying Snakes on a Train as commenting, "I can't believe they made the 2nd movie."

Asylum's American Battleship, starring Mario Van Peebles and Carl Weathers, is alleged to have been shot in North Carolina in relative secrecy. The film's plot is described similarly to Universal's film, although without explicit mention of aliens: "When a fleet of mysterious ships wage war against the Earth, only the crew of the USS Iowa, the last American battleship, can prevent global Armageddon."

Universal is suing for false origin, false advertising, copyright infringement, and unfair competition. The studio is looking for a permanent injunction, destruction of the allegedly infringing items, corrective advertising to disclaim association, and compensatory damages. Universal also reports successfully getting a UK court two weeks ago to issue an order restraining Asylum's UK distributors from distributing the alleged knockoff.

This isn't the first time that Asylum has been targeted by a major motion picture studio. Fox sued over Asylum's Day the Earth Stopped, an alleged rip-off of the Keanu Reeves sci-fi film. In 2008, THR took a look at the dark art of making blockbuster movie knockoffs. Here's why these cases are tough to win for plaintiffs.